The Thrilla in Manila

The Thrilla in Manila 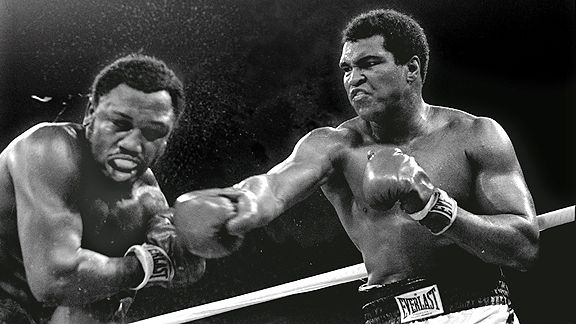 The Thrilla in Manila was a heavyweight championship fight between Muhammad Ali and Joe Frazier. The third and final fight between Ali and Frazier was fought at the Araneta Coliseum in the Philippines on Oct. 1, 1975. Widely considered one of the greatest fights in boxing history, the Thrilla in Manila saw Ali retain his world heavyweight championship when Frazier's corner stopped the fight before the 15th round.

Philippine President Ferdinand Marcos offered to host the fight, in part to quell a potential rebellion in his country. Following the success of the Rumble in the Jungle (an earlier championship bout between Muhammad Ali and George Foreman), Don King promoted the Ali-Frazier fight as the Thrilla in Manila. King was able to draw a much larger purse from the foreign market than he would have been able to get in the United States, as interest in a third Ali-Frazier fight had been reduced by their second meeting (which had not even been a world championship fight).

Ali entered the fight having won his previous seven bouts. He had regained the world heavyweight championship 11 months earlier against Foreman and successfully defended it three times against lesser competition. Frazier had fought only once in the year leading up to the fight, and hadn't been the same fighter since his first meeting with Ali. He had lost their rematch, and also suffered a six-knockdown loss against Foreman, leading experts to question if he could regain his championship form.

In the lead-up to the fight, Ali used his trademark verbal sparring skills to regularly insult Frazier. However, where his words had previously been comedic in tone, they took a darker turn, as Ali regularly compared Frazier to a gorilla. At one point he famously took to punching a rubber gorilla meant to represent Frazier. The verbal jabs were surprising as Ali and Frazier had been close in earlier years, with Frazier even helping Ali financially during his banishment from boxing, but their relationship had deteriorated since the buildup to their first fight.

Frazier trained much more seriously than Ali in the months leading up to the fight. While Ali was holding a training camp that came to be known as "The Ali Circus" and carrying on an extramarital affair, Frazier remained focused on the fight itself. Ali, meanwhile, was distracted by what would turn out to be the end of his marriage to Belinda Ali.

In the days leading up to the fight, Ali's verbal jabs became more and more pointed, and King feared that the two fighters would end up fighting during a news conference, rather than waiting for the fight itself.

The fight was scheduled for 10:45 a.m. local time on Oct. 1, 1975, to give the American television audience the best viewing time. Despite the early start time, the reported temperature at fight time was 107 degrees, with the air-conditioning in an overcrowded Araneta Coliseum doing little to cool the ring.

Frazier, wearing dark blue trunks with white trim, expected Ali to come out and dance around the ring to avoid Frazier's punching power. However, Ali, wearing white trunks with black trim, came out the aggressor, attacking Frazier, standing flat-footed and throwing a series of combinations. Frazier did a poor job of protecting his head, and his knees buckled during both the first and second rounds, but he never went down. Ali continued his attack in the third round, and in the fourth he began to taunt Frazier. However, at the end of the fourth round, Ali became frustrated with Frazier's ability to stay up, glaring at him and yelling, "You dumb chump, you!"

A tired Ali retreated to his corner for the fifth round, trying to use the rope-a-dope technique that had served him so well since the championship fight against Foreman. However, Frazier's punches did more damage than Ali had anticipated, as Frazier worked Ali's body rather than trying to attack the protected head of the champion. In the sixth round, Frazier unleashed a flurry of powerful left hooks, forcing Ali to retreat to his corner again. When the round was over, Ali rested on his stool for the first time in the fight.

When Ali came out for the seventh round, he said to Frazier, "Old Joe Frazier, why I thought you were washed up." Frazier replied, "Somebody told you all wrong, pretty boy." Frazier continued to control the tempo of the fight through the 10th round, evening the fight on the scorecards. Between the 10th and 11th rounds, Ali's corner urged him to find the same energy he'd had early in the fight and become the aggressor once again. Ali was forced back into his corner by Frazier in the 11th round, but rather than retreat into the rope-a-dope, he responded with power shots of his own, pummeling Frazier's face.

By the end of the 12th round, Ali had regained control of the fight, and Frazier looked like a beaten man. Ali knocked Frazier's bloodied mouthpiece out in the 13th round and nearly knocked him out with a strong right in the center of the ring. In the 14th round, Ali unleashed a flurry of rights on Frazier, who was no longer coiled in a defensive stance but standing nearly upright. Frazier's eyes were swollen nearly shut, and he was unable to see Ali's punches. At the end of the 14th round, referee Carlos Padilla had to guide Frazier back to his corner.

During the break between the 14th and 15th rounds, Eddie Futch, Frazier's trainer, decided to stop the fight. Frazier protested, demanding one last shot at Ali, but Futch insisted that sending a blind Frazier out for the final round would have easily resulted in a knockout win for Ali. Meanwhile, Ali was just as exhausted in his corner, having asked trainer Angelo Dundee to cut off his gloves and end the fight. Dundee ignored him and prepared for a 15th round that never came due to Frazier's retirement.

Immediately after the fight, Ali was highly complimentary of Frazier, calling him the best fighter in the world next to himself and saying that Frazier always brought out the best in him. In 1999, ESPN ranked the fight as the fifth-greatest sporting event of the 20th century, behind the Miracle on Ice, Super Bowl III, the 1951 Giants-Dodgers playoff and the 1958 NFL championship game.

Neither fighter was ever the same after the Thrilla in Manila, with Frazier fighting just twice more (losing to George Foreman and drawing with Floyd Cummings in an ill-fated 1981 comeback). Ali went on to win his next six fights after beating Frazier, but never again displayed his trademark speed and power, even after losing and then regaining the world heavyweight championship. It has been widely speculated that the beating Ali took in Manila contributed to his later health problems, with Frazier even at one point responding to a question about Ali's declining state by saying, "I did that to him."

THE THRILLA IN MANILA 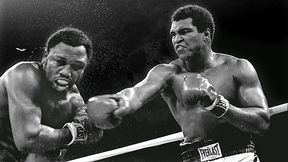 For the 35th anniversary of The Thrilla in Manila, ESPN.com topics has you covered on the fight and the key people involved.