The Kentucky Derby is a stakes race for 3-year-old thoroughbred horses, held each year in Louisville, Ky., in May. The race covers one and one-quarter miles and is known as "The Most Exciting Two Minutes in Sports" after its approximate time length. The Derby is the first leg of the Triple Crown of thoroughbred racing.

The race is an extremely popular event, both in sports and in culture, and typically draws about 155,000 fans. The Derby is the final event of a two-week-long Kentucky Derby Festival. It holds many popular traditions, in everything from fashion -- large and distinctive hats for female attendants -- to drinks -- the popular mint julep.

Horse racing has been a popular sport in Kentucky for more than 150 years, with the first race course laid out in Lexington in 1789. The first Derby, though, came about 100 years later, in 1875. Founded by Col. M. Lewis Clark, the Derby was the first of its kind in the South and was modeled after popular stakes races in England.

The first Kentucky Derby took place on May 17, 1875, and was watched by more than 10,000 viewers. Four races were scheduled that day, but the Derby was the premier event. The first race was won by a 3-year-old chestnut colt, Aristides. Despite the high attendance and popularity of the event, the Derby and the Louisville Jockey Club were not financially successful, and it was bought and incorporated in 1894.

The Derby had another marquee year in 1915, when Regret became the first filly to win the race. After two record-setting years and a history-making race the next, the Derby had become a premier American sporting event.

Having been taken over yet again, and consolidating its power with other Kentucky racing sites, the Derby became part of the Kentucky Jockey Club and its popularity grew over the next decade. The club obtained several new tracks in both Kentucky and Illinois and eventually reorganized as a holding company to increase its capitalization by almost 100 percent. By 1928, the American Turf Association was the new holding company for Churchill Downs and its partner tracks.

In 1925, the race was broadcast live on the radio for the first time, spreading its popularity across the country. Its first international broadcast came not long after, when the transmission was sent from Louisville to New Jersey to England in 1933. Two years later, the first Kentucky Derby Festival was held.

World War II provided some challenges for the Derby, but it continued each year. In 1943, government travel restrictions precluded the sale of any out-of-town tickets, and Count Fleet won a race known as the "Street Car Derby." The government banned all horse racing in January 1945, threatening the Derby's continuous run of races, but it was lifted in May and the 71st Derby was held in June. Over the 10 years from 1940 to 1950, Churchill Downs Foundation donated $1.5 million to war charities and other causes.

The first televised Derby -- on a local channel and a limited basis -- was run in 1949. The first national telecast came three years later, on May 3, 1952; and a video replay system was installed for the first time in 1954. The 1950s also saw vast improvements and renovations done to Churchill Downs, modernizing and expanding the track.

The first (and only) Derby winner disqualification took place in 1968, when the winner, Dancer's Image, was found to have had an illegal medication in its blood during post-race testing. The second-place finisher, Forward Pass, was declared the winner.

After several takeover bids, from private groups and the city of Louisville, the board of directors created the Derby Protection Group to outbid all suitors and maintain control of the company -- also successfully driving stock up significantly.

In 1973, Secretariat won the Derby and broke two minutes for the first time in Derby history. Secretariat finished the race in 1:59.40. He went on to become the first Triple Crown winner in 25 years. After that history-making race, the Derby followed with another landmark event when a record 163,628 viewers -- more than for any other thoroughbred race -- watched the 100th running of the Derby. Cannonade topped a field of 23 for the win.

Pat Day was the man of the hour in the mid-1980s. In 1983, he rode 169 winners in the spring meet and 54 in the fall meet. Five times he ran five winners in one day. The following year, he broke a 77-year- old record by riding seven winners in eight races in one day.

Renovations continued through the 1970s and 1980s, completing renovations to the turf, press box, sky boxes, clubhouse and paddocks by the late 1980s. The renovations both kept the Derby as the premier horse racing event in the country and attracted the Breeders' Cup to Churchill Downs, earning a record crowd of 80,452 in 1998.

Throughout the 2000s, the Derby continued to grow and expand and entered the age of technology. A new simulcast betting system was put into place and a state-of-the-art center was built several miles from the track specifically for betting.

By 2004, the Churchill Down Stakes schedule included a record 45 races, 33 in the spring and 12 in the fall. That same year, the Kentucky Derby winner, Smarty Jones, was featured on the cover of Sports Illustrated, the first time in 20 years a horse had graced the cover. The company continued to buy more tracks across the country, in New Orleans and other cities. Queen Elizabeth II visited the Derby during a trip to the United States in 2007.

Calvin Borel became the most famous jockey in recent history when he won three out of four Derbies from 2007 to 2010 -- the first jockey ever to win three in four years. Borel won with Super Saver in 2010, Mine That Bird in 2009 and Street Sense in 2007. Borel's victory with Mine That Bird was the second biggest upset in Derby history, after Donerail.

Churchill Downs is a racetrack in Louisville, Ky., that hosts the Kentucky Derby each year. It is one of the most famous tracks in the world, and was ranked the No. 5 course in North America in 2009. Churchill Downs also is the host for the 2011 Breeders' Cups, which it has hosted six times before.

The course features a one-mile dirt racetrack. The facility usually hosts about 50,000 viewers on its signature grandstands, though that number can triple on Derby days. One of the track's signature images is that of the twin spires that sit on top of the course's grandstand, and they now serve as the course's official logo -- and that of its owner, Churchill Downs Incorporated.

Churchill Downs opened in Louisville in 1875 with the inaugural Kentucky Derby. The race was created by horse breeder Col. M. Lewis Clark, who was inspired by the derbies in England in the 1870s. Clark created three stakes races to be held at Churchill Downs: the Kentucky Derby, Kentucky Oaks and Clark Handicap. The first Derby was held on May 17, 1875, the first day the track formally opened.

Churchill Downs was named a National Historic Landmark in October 1986. 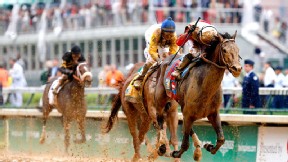 Orb Rolls On To Preakness

Orb showed he was a worthy favorite with a romp through the mud to win the 139th Kentucky Derby. Story »