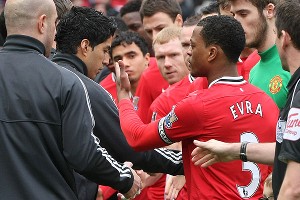 Matthew Peters/Getty ImagesLuis Suarez's refusal to shake hands set the tone for a tense game that saw Wayne Rooney score twice to give United the 2-1 win.

If there were any question about who is the most polarizing figure in football at the moment, Luis Suarez answered them at Old Trafford on Saturday. In the span of some 90 minutes, the controversial Uruguayan refused to shake Patrice Evra's hand before the opening whistle, found himself at the center of a tunnel bust-up at halftime, petulantly kicked the ball into the stands on one occasion and toward the touchline past Evra on another, and scored an improbable goal in the 80th minute against the run of play. Before the game, the police confiscated thousands of copies of a United fanzine that contained a poor "joke" for fear that it would stir up further racial hatred. And after the final whistle blew, giving Manchester United a deserved 2-1 victory, Evra sprinted down the pitch to celebrate with the fans right in front of Suarez, causing another moment of tension between the two sides, all before Sir Alex Ferguson branded the striker a "disgrace."

Right, that's it. Out of the way. All the ugliness of this season of hate continues, but believe it or not, a football game also broke out.

The first half was a taut affair, with few chances as both sides played conservatively. Liverpool set up with one player, Suarez, up top. Wayne Rooney and Danny Welbeck led the charge for United, with Ryan Giggs providing service on the left and Antonio Valencia down the right. As the minutes ticked by, trends quickly emerged.

One: Valencia terrorized Jose Enrique time and again down the right, as the pacy winger has done to so many left backs this season. Two: Glen Johnson, often not given the credit he deserves, looked strong in attack and made some good defensive stops as well. Three: Evra, for all his energetic play down the flank last week, continued his poor run of defensive showings. And four: Liverpool's "big buys" of Stewart Downing and Jordan Henderson had terrible shifts, often failing to execute the most basic of passes, forcing Steven Gerrard to do more dirty work than Kenny Dalglish would have preferred.

The first real chance happened in the 10th minute, as Suarez's clever one-touch pass found Johnson in space on the right. The English international got on the inside of Evra for the second time already, but with David de Gea beaten, he hit the ball wide of the far post. United's best chance came in a Barcelona-worthy sequence of one-touch passes: Welbeck to Rooney to Paul Scholes. One part of United's ageless wonders, Scholes picked out his counterpart, Giggs, on the left and continued his run toward goal. Giggs crossed the ball to Scholes, who should have scored with his header, but instead it ended up straight into the gloves of Pepe Reina.

In the 32nd minute, Giggs also played Welbeck in behind, but the born-and-bred Mancunian opted to pick out Rooney -- who was crowded by a sea of white shirts -- instead of taking the shot.

Another member of United's old guard, Rio Ferdinand, won the ball from Dirk Kuyt in the penalty box in the 40th minute. And in the 45th, Ferdinand put in a perfectly timed challenge to prevent Suarez from being free on goal.

The halftime whistle blew, Suarez booted the ball into the stands, Jonny Evans argued with referee Phil Dowd and Dalglish appealed to his striker to calm down.

But whereas Liverpool was well in the game for 45 minutes, it lost the match in four. The second half started like the first one, with Valencia putting Enrique in his back pocket and earning a corner in the 47th minute. But on the ensuing kick, Henderson's nightmare continued as the player headed the ball into Rooney's feet, and without hesitation, Rooney swept the ball past Reina. It wasn't an easy finish, either. In the 50th minute, Jay Spearing -- a player who has shown some encouraging signs this season with his ability to get "stuck in" and help nail down the midfield -- cheaply gave the ball away to (who else?) Valencia. The break was on, as Valencia played in Rooney down the middle. Once again, without hesitation, Rooney slotted the ball under Reina with his first touch.

Rooney has been criticized for not bringing his A-game against Liverpool; coming into this match, he had scored twice in 19 appearances against the Reds. In four minutes, he doubled that tally.

From there, Liverpool's spirit wilted to the point that for large swaths of the second half many of the players seemed to have given up. Heads dropping, it was an abject display, the kind that makes you wonder whether the referee should card players for not trying. There was no closing down, no tackling to be seen as the Reds allowed United to calmly, easily pass the ball around without any pressure.

It wasn't a rope-a-dope, or at least it didn't look that way. But against the run of play, Michael Carrick tackled Suarez from behind for a foul and yellow card. On the ensuing free kick, Evans fell down in the box as the ball bounded off the side of a surprised Ferdinand, who didn't seem to expect the ball to come to him. Of course, the ball could only drop to one player, and just like that Suarez made it 2-1.

From there, nerves showed on both sides, and Craig Bellamy (on as a sub in the 61 minute) helped enliven his side. You could say that, had Liverpool put in the kind of effort it displayed in the dying minutes for the entire second half, Dalglish's players might have gotten something out of the game. Instead, United saw the victory through to go one point clear of Manchester City atop the table, until the Sky Blues take the pitch Sunday against Aston Villa. 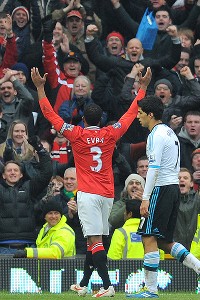 Sadly, the match ended like it started, with tensions high. Evra couldn't resist celebrating the win in Suarez's face, prompting Dowd and several Liverpool players to push the Frenchman aside and derail his taunts. Evra could have taken a dignified route to his postmatch revelry rather than trying to wind up the Uruguayan in a bit of a stunt that could have caused things to turn even uglier.

But Ferguson had the final word, ripping into Suarez for the player's refusal to shake Evra's hand, calling him a "disgrace." "I couldn't believe, I just could not believe it," Ferguson told Sky Sports. "Patrice told me this morning, 'I'm going to shake his hand, I've nothing to be ashamed of.' But then Suarez refuses. He's a disgrace to Liverpool Football Club. Some players should not be allowed to play for Liverpool again, the history that club's got, and he does that. In a situation like today he could have caused a riot."

It all leads you to wonder what the future will hold for Suarez, both at Liverpool and in the Premier League. Will Dalglish & Co. continue to stand by their divisive player? With more ugly displays like today's game, Suarez will continue to put the people who support him in a tough position -- and if he keeps it up, he may earn himself a one-way ticket out of England.