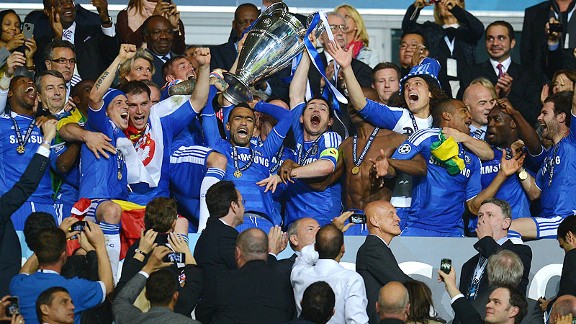 The classic horror genre is predicated on the concept that a monstrous creature refuses to die despite being left for dead over and over again. Chelsea Football Club turned that concept on its head Saturday at the Allianz Arena -- and, really, has been flipping the script right from when Roman Abramovich hired Andre Villas-Boas to start this long, arduous and unpredictable season. Of course, the Blues were hardly a monster in Munich; they set up to defend against the powerful threats of Arjen Robben, Franck Ribery & Co., but they didn't die. Instead, they rescued the match in the 88th minute thanks to a Didier Drogba goal against the run of play to level the match at 1-all and eventually went on to win the contest on penalties 4-3 with Drogba applying the finishing touch.

The ghosts of Moscow '08 are officially banished, while the shadow of Franz Beckenbauer, who led Bayern to a hat trick of European Cups in the 1970s, continues to loom large over the German side.

The match playing out the way most predicted, Bayern Munich maintained the bulk of possession in regulation time, while Chelsea defended in numbers like it did against Barcelona in the semifinals. While it worked a few weeks back, the tactic appeared doomed Saturday night.

Bayern missed three key chances in the first half (Robben, Thomas Muller and Mario Gomez, who appeared to choke on more than one shot in the match) but finally broke through in the second half. In the 83rd minute, on a Toni Kroos cross from the left, Muller -- who was likely starting only because defensive midfielder Luiz Gustavo was suspended -- headed the ball into the ground. Petr Cech attempted the save, but the ball bounced over his head, hit the underside of the crossbar and went in.

Cue the celebrations -- and perhaps the game's most important tactical decision. Bayern coach Jupp Heynckes decided to ride out the match, taking Muller off for more defensive help in the name of Daniel van Buyten.

But really, after everything we've seen this season in general and from this Chelsea side in particular, should we be surprised at what happened next? Bayern was dominating possession and proving that attack is the best form of defense. And so it was that in the 88th minute, on a Juan Mata corner, Drogba raced across the goal to hit a powerful header into the upper right corner. Maybe Manuel Neuer could have done better, but nonetheless, this was the first sign that this was shaping up to be the night of Drog.

In extra time, Drogba looked to make minimal contact on Ribery, who's not exactly known for staying on his feet when a light breeze blows through the penalty box. Down he went, and although as innocuous as it looked, that was it for Ribery -- he went off injured. Former Chelsea player Robben stepped up to take the penalty, and his powerful, low drive was saved by former teammate Cech.

It was a more even affair from then on, with tired legs and minds shaping the affair. As commentator Gary Neville said, "This isn't about football anymore."

No, it turned out to be all about Chelsea, with more ironic twists than can be recounted in this space. But when we reached the penalty shootout, you had to favor the Germans, right? Chelsea famously lost the 2008 final in Moscow on PKs, with John Terryslipping on the turf. And Bayern staked itself to an early lead after Philipp Lahm converted the night's first penalty and Mata missed Chelsea's first attempt.

Bayern had victory close in hand, a 3-2 lead, when Ivica Olic (playing his last competitive match for the club) chummed his kick from the spot. Then, a weary Bastian Schweinsteiger made his stop-and-start run-up more awkward to watch than an episode of "Life's Too Short," his effort saved by Cech. Finding itself one kick from Abramovich's holy grail, just like in '08, Chelsea's man for the big occasion stepped up. In Moscow, Drogba was unable to participate in the shootout after being sent off, and Terry had to step in. This time, the captain was the spectator due to suspension and Drogba the hero as he cooly took what could be his last kick for the Blues.

Rich with irony, this game of football, and rich with drama, too. Chelsea came to Munich in an all-or-nothing scenario. It had finished sixth in the Premier League, its worst finish in 10 years, and while it won the FA Cup, a loss here would have sent the club into the footballing purgatory otherwise known as the Europa League. Instead, the Blues have ended what is undoubtedly the most successful season of the Abramovich era. It could have been a disaster; instead, it turned into a borderline miracle.

Much of the credit must go to interim head coach Roberto di Matteo. When he took over for AVB -- can anyone even remember those tortured times, with the young coach crouched in psychic pain on the sidelines? They seem a lifetime ago -- the Italian righted the ship. Di Matteo, whose Chelsea blue blood is almost as strong as his instinct to play a defensive setup, played to the strengths of this squad, propping up the old guard of Frank Lampard, Drogba, Terry and Ashley Cole, all of whom appeared miffed at the younger AVB. And in turn, the players repaid their manager with spirit and a willingness to go all-out for the cause.

You saw that against Bayern. Cole, who had a superb game in terms of effort and position, blew past David Luiz in the 59th minute to block a shot by Robben. In the 75th, with Cole far up the pitch, Drogba played the role of left back and stopped Robben. Just two of many examples of a team playing as a unit, with Gary Cahill also putting in a blood-and-sweat shift at the back after returning from a hamstring injury. Even in extra time, he did just enough to put Gomez off what looked to be a certain goal.

One for all, all for one -- that was the Chelsea ethos in Munich. Bayern, on the other hand, played the better football for most of the 120 minutes, with Robben being the team's standout. But erratic shot-making got the better of the side, with the pressure of playing at home, in the shadow of Beckenbauer, perhaps too much to handle after all. Plus, with Bayern having lost the German league and getting tonked in the cup final, this match was a similar all-or-nothing affair for this side. The moment maybe got the better of them. Instead of starting a dynasty with a well-rounded squad, which was being talked about before this match, Schweinsteiger & Co. will have to wait another year.

In contrast, no one is talking about building anything with this Chelsea team. If anything, it could be torn asunder during the offseason as Abramovich looks to rebuild his "aging" squad and perhaps find a new manager.

True enough, the Blues will have to rebuild at some point. But if this was Drogba's last kick of a football for CFC, what a way to go out.

The ghosts of Moscow have finally been exorcised.