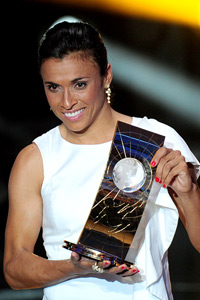 Franck Fife/AFP/Getty ImagesBrazil's Marta, who was the FIFA Women's World Player of the Year, will join the Western New York Flash this season.

The latest expansion franchise in Women's Professional Soccer, the Western New York Flash, had already assembled a solid roster, but its acquisition of five-time FIFA Player of the Year and Brazilian superstar Marta earlier this week pushed the team right to the top of the list of favorites this season.

Marta, who has won the MVP trophy in the first two WPS seasons, will reunite with her former FC Gold Pride strike partner, Christine Sinclair, on the Flash. The two combined to score 29 goals last season, better than the season totals for three of the league's other six teams. Also on Western New York's roster is No. 1 overall WPS draft pick Alex Morgan, whose goal in Italy in November helped the U.S. clinch a Women's World Cup berth.

"I hope we get lots of support, because that is pretty exciting when you put it like that," Flash coach Aaran Lines said of his offensive trio, when reached by phone this week.

But he's not quite buying into the talk of being a favorite in WPS just yet. "We haven't assembled our players, and anyone who's coached knows it's a long, long, long way and a hard road to winning and being successful," Lines said. "But I think we've given ourselves a very good chance of being able to compete right off the bat."

Although the Flash are an expansion team, they feature eight players on their roster who played for last year's champion FC Gold Pride, giving team members a level of familiarity with each other, particularly with the league's most dangerous offensive pairing of Marta and Sinclair. "I think it will definitely play a role in the level of comfort within the team," Lines said.

FC Gold Pride folded in the offseason after beating the Philadelphia Independence 4-0 in the league's title game. The Flash took over the final year of Marta's contract with FC Gold Pride. They also signed 2010 WPS Rookie of the Year and former FC Gold Pride defender Ali Riley, and traded for Swedish midfielder Caroline Seger from Philadelphia.

Western New York joins the league after participating in the W-League this past year and winning the 2010 title. Lines said he expects training camp to start on March 7 to prepare for the 2011 WPS season.

The Flash will face a tough test in their first WPS game, which is against the Breakers on the road in Boston, widely considered the best atmosphere in WPS, on April 17. Boston's back line features two-time WPS Defender of the Year Amy LePeilbet and national team co-captain Rachel Buehler; the offense is led by England's Kelly Smith, who finished fourth in the 2010 FIFA Player of the Year voting. The Breakers lost to Philadelphia in overtime in last year's Super Semifinal match, narrowly missing out on advancing to the final.

"Great way to start -- away in Boston," Lines said. "Doesn't make it any harder than that."