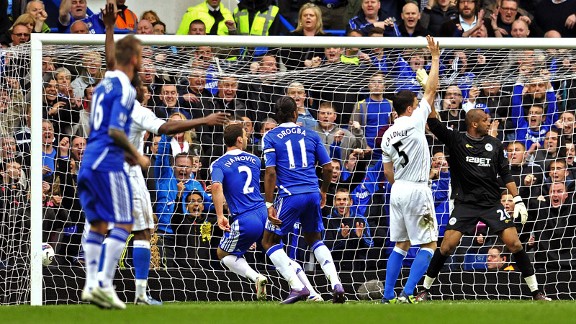 Glyn Kirk/AFP/Getty ImagesBranislav Ivanovic (2) looks toward the linesman to see if his clearly offside goal against Wigan would be disallowed. It wasn't -- and is yet another reason the sport should use video replay.

Amazingly, my beloved Baggies rolling over against Manchester City like a puppy at a dog-treat convention Wednesday night is only the second greatest travesty of the soccer week. The inept officials ruining the Chelsea-Wigan game Saturday still stand atop the Travesty of the Week podium.

The "to err is human" crowd, no doubt, think that poetic justice was served by Wigan having a "historic moment" with a 1-0 victory over Manchester United on Wednesday, when the Latics benefited from a couple of calls. Nonsense. The gilded blazers running FIFA, UEFA and every other can of alphabet soup masquerading as guardians of the game should be ordering their flunkies to order their flunkies to order their flunkies to rip up every "Fair Play" banner that's ever been paraded before a game and replace it with one that declares: "Video Review Is Available On Demand."

That's the most infuriating thing about the non-offside calls in the Blues 2-1 win over Wigan: Video review was available on demand. It was right there at the push of a button from the production truck broadcasting the game, but the powers that be don't want to use it. The NFL uses it, the NCAA basketball tournament uses it, tennis, cricket and, as I was told this week, even Arena Football uses it. But not football. Why would the world's most popular sport want to enter the 21st century?

Not because it's difficult to implement. This week, as a gesture of goodwill to Sepp and the Blazers, I canvassed a distinguished panel of American and English soccer producers that I've worked with over the years. They have enough Emmy Awards among them to fill Tiffany's showroom on Fifth Avenue. I asked each of them how difficult, from a technical perspective, it would be to offer video review to a monitor at the fourth official's station at any EPL, MLS, Champions League or World Cup stadium.

"Easy. Very easy. Criminally easy," says a producer I've worked with at the past two World Cups. "A monitor is simple to set up at midfield. The replay would be ready for the official to see by the time he gets to the monitor."

"It would take no longer than a minute -- in some cases no more than 30 seconds," says an English television veteran who has directed games all over the world.

"[The replay] can be available 20 seconds after the shot has taken place, so the fourth official could see it after 30 seconds," another longtime English resident of the television control room front bench says.

"The fourth official can see a real-time replay from TV within seconds and could make the call without affecting the 'flow' of the game," says a World Cup veteran from the West Coast.

In other words, while referee Mike Jones was listening to the legitimate pleas of the entire Wigan team that Branislav Ivanovic was offside when he slotted home Chelsea's first goal, the fourth official could have watched a video replay. In such a scenario, before Jones even approached the new poster boy for offside call incompetence, his assistant referee Dave Bryan, the fourth official could have informed Jones that the goal shouldn't stand.

This debate is not new. The Frank Lampard over-the-goal-line shot that was seen by everyone except any of the officials in charge of the England-Germany World Cup game in South Africa will ultimately be the tipping point in the goal-line technology discussion. Not even Sepp and the Blazers can ride out that particular storm forever. Expect goal-line technology to be in use at the 2014 World Cup, if not before.

But what of offside calls? For me, Chelsea-Wigan is the tipping point for offside review.

This past season, the NFL instituted video review on every touchdown. Soccer should do something similar. Review the play for offside every time the ball goes into the back of the net. It doesn't happen that often, and more and more in the modern game, the stakes are too high not to use every available avenue to make sure that a goal is, in fact, a goal. With Chelsea fighting for a Champions League spot and Wigan in the midst of a relegation battle, the fate of literally millions of dollars -- and, no doubt, jobs -- will be influenced by the Jones' and Bryan's not-so-funny comedy of errors, and by Jones not having video technology at his disposal to correct a mistake.

I asked one of the most prominent American soccer producers of the past 25 years what he thought about video review.

I couldn't agree more with that sentiment.

After seeing the television replay while calling the game, an incredulous John Motson, the legendary BBC announcer, asked of the Ivanovic goal: "Where's the flag?"

With all due respect to the beloved Mottie, the question that needs to be asked is "Where's the video review?"