Defeat will be Gulati's legacy

Nobody roots for Goliath, and on Thursday, he didn't get enough votes from FIFA's executive committee either, as the U.S. bid to host the 2022 FIFA World Cup was beaten by Qatar's surging finish.

It's a decision that is downright shocking given the merits of the U.S. bid. But in the end, it didn't matter that the U.S. could host the World Cup tomorrow with its vast array of stadiums, top-of-the-line communications systems, and ready-to-go transportation infrastructure. It didn't matter how many tickets could be sold or how fat the television contracts would be. What mattered more were the whims of the 22-man FIFA executive committee, which thought it better to take a huge gamble and bring the tournament to the Middle East for the first time.

That's not to say that granting the tournament to Qatar was completely devoid of reason. There was the "It's our turn" factor, which effectively trumped the Americans' successful hosting of the 1994 World Cup -- another occasion when FIFA gambled. There was the growth factor, with the voters apparently dazzled by the untapped potential of the Middle East and, by extension, Asia -- which countered a similar argument from the U.S. bid committee. That led to the issue of which bid would leave the biggest legacy. The wads of cash Qatar has at its disposal to build stadiums (and the like) no doubt helped tip the scales, as well.

"Obviously we're very disappointed with the outcome of what has been a long process over the last couple of years," said U.S. Bid Committee chairman Sunil Gulati in a conference call with reporters. "We submitted what was technically a very good bid and rated highly on the revenue side and had the whole country behind it, from President Obama down to the grassroots level. We made a compelling argument, but obviously not compelling enough to beat Qatar."

But for the U.S., this was largely a failure of politics and, more specifically, the Americans' inability to convince a majority of the executive committee that the U.S. bid deserved more consideration than a country with an average July temperature of 95 degrees. Gulati admitted as much.

"It's clear that there was the possibility of some alliances and the numbers seem to bear that out," he said. "It's also clear that in the first, the second and even the third round there was some tactical voting -- groups using a vote or two to make sure someone else wasn't eliminated which would help later on…It's politics, it's friendships and relationships, it's alliances and it's tactics. There are far too many permutations, especially with these two World Cups being decided on the same day [to speculate]."

And it was also a failure of Gulati himself, not that many are inclined to blame U.S. Soccer Federation president.

"Gulati has done a great job, devoted himself 24/7 to this," said former USSF president Alan Rothenberg before Thursday's vote. "He put all the right pieces together. Everybody says we have technically as good a bid, if not the best bid, that there is. He put together a great group of supporters. He's done everything you can do. I don't think there will be any blame. It [will be] an unfortunate result that we didn't get the ultimate opportunity."

But navigating the corridors of power within FIFA and forging political alliances was supposed to be one of Gulati's strengths. Instead, he looked to be outmaneuvered at every turn, as Qatar effectively countered every U.S. strength. 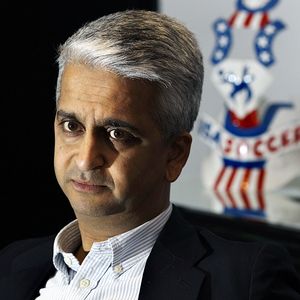 Of course, the extent to which this vote was conducted on a level playing field is open to question. FIFA's decision to vote on two tournaments simultaneously may have proven to be the single biggest factor in undermining American hopes. The scenario invited the kind of corruption that FIFA was compelled to address only when presented with the clearest evidence, as was the case when executive committee members Reynald Temarii and Amos Adamu were caught on video selling their votes and were later suspended. And with rumors swirling of backroom deals, you can only speculate about how much skullduggery was actually going on.

Then again, in any election there are unspoken rules in addition to those explicitly written down. And short of any money changing hands, you can only congratulate Qatar on playing the game better than the U.S. did. As for the long-term implications of this defeat, they are sobering to say the least. Is it a death blow to soccer in the U.S.? Of course not. The game will continue to grow.

But Thursday's failure is akin to a town being bypassed by the railway lines of yore. The missed opportunity to accelerate the growth of the sport is immense. In all likelihood, soccer in the U.S. will ultimately reach all the promise that hosting the World Cup held. But the game has now been forced to embark on a 5,000-mile detour, and not for the first time. The job of everyone connected to the game remains difficult, and is perhaps harder.

The U.S. could tee up another bid effort for 2026, and with China out of the way due to the fact that Asia can't host two tournaments in a row, the Americans would once again be a favorite. But Europe would be back in the mix, making it anything but a slam dunk.

Alas, for Gulati, this defeat will probably be his legacy, which given his longtime service to the game is -- in some ways -- highly unfair. But that is the nature of being Goliath, even for the diminutive USSF president. The defeats are the only things people remember.