No one will be happier to see the back of 2010 than U.S. Soccer Federation president Sunil Gulati. First, there was the U.S. national team's second-round loss to Ghana at the World Cup. Then there was Juergen Klinsmann turning down Gulati's offer to manage the U.S. side. Finally, Qatar won the right to host the 2022 World Cup over a U.S. bid headed by Gulati.

That's not to say this past year was devoid of highs for U.S. soccer. Heck, Landon Donovan's stoppage-time winner against Algeria, which propelled the U.S. into the second round in South Africa, will sustain supporters through the bitterest winter night all by itself. (For more on the U.S.'s best moments of the year, click here.)

But the reason such moments are so uplifting is due to the struggles that preceded them, and the past 12 months have also had their share of disappointments. To be clear, the game of soccer continues to grow in the U.S., but the stumbles encountered in 2010 demonstrate that progress is far from linear.

Our top disappointments of 2010:

6. The women's game takes its lumps

When WPS opened for business in 2009, nobody thought it would have an easy time of it. But 2010 turned into a nightmare that would have left Wes Craven proud. St. Louis Athletica folded in the middle of the campaign, while champions FC Gold Pride -- arguably the best women's team ever assembled -- ceased operations after the season. With the Chicago Red Stars suspending operations for 2011, the league is now made up of just six teams, none of which reside west of the Mississippi. The future of WPS is very much in doubt.

Things didn't go much better for the U.S. women internationally. The U.S. U-20 side fell in the quarterfinals of the FIFA U-20 Women's World Cup, while the U-17s became the first U.S. team to not qualify for a World Cup. The senior side took its lumps as well. A stunning 2-1 loss to Mexico in World Cup qualifying meant the U.S. had to survive what was essentially a one-game playoff against Costa Rica and then a home-and-home encounter with Italy to secure their trip to Germany next summer. To the team's credit, survive they did, but in the process, plenty of concerns were raised over the fact that other teams are beginning to pass the U.S. in terms of technical ability. While raising these questions might end up having a galvanizing effect, there are also reasons to worry about the team's future prospects.

5. MLS in the CONCACAF Champions League

Yes, kudos to Real Salt Lake and the Columbus Crew for surviving the group stage and reaching the quarterfinals of the CONCACAF Champions League. That these two will square off next February means an MLS side is guaranteed to reach the semis. But safely navigating the group phase is the minimum that ought to be expected of MLS teams in this competition. Instead, what we saw was disappointment mixed with humiliation.

How else to describe the Los Angeles Galaxy's 5-3 defeat at the hands of the second-tier side Puerto Rico Islanders in the preliminary round? While Toronto gets something of a pass because it was grouped with RSL and Mexican side Cruz Azul, the Sounders finished at the bottom of their group. Taken as a whole, MLS teams should do better.

Many traits go into quality forward play. The ability to hold the ball up, link with others and harass the opposition when possession is lost are all part of the job requirements. But a striker's primary responsibility -- wait for it -- is to put the ball in the net. And the U.S. team has seen precious little of that over the years.

You have to go to June 17, 2002, when Brian McBride struck in a round of 16 match against bitter rival Mexico, to find the last time a U.S. forward tallied in a World Cup. And after the failure of U.S. forwards to score this summer, it won't be until at least 2014 that another American striker raises his arms in celebration.

To be fair, the injuries sustained by Charlie Davies in an October 2009 traffic accident had a far-reaching effect on the team, and by extension, the performance of the forward line. Davies was unable to recover in time to play in the World Cup, and his replacements couldn't replicate the finishing ability. But it also raises the question of why the U.S. player development system hasn't done a better job of producing more players like Davies. While it's true that some talented prospects, such as 17-year-old Juan Agudelo, are potential stars of the future, the pool of impact forwards remains shallow.

MLS loves to trumpet the high-priced performers who have joined the league as Designated Players. But once you get past Landon Donovan and Juan Pablo Angel, the return on investment -- at least on the field -- remains shockingly poor. Geovanni of the San Jose Earthquakes, Mista of Toronto F.C. and Luis Angel Landin of the Houston Dynamo have all exited the league after having little to no impact. Freddie Ljungberg became such a distraction in Seattle that he was traded to Chicago, and the turnaround in the Sounders' fortunes was near immediate.

Not even the high-profile arrivals in New York of Thierry Henry and Rafa Marquez had the desired effect. Henry spent much of the time injured. The lasting impression of Marquez was his second-leg playoff performance against San Jose, when he was seen pleading for a foul while Bobby Convey glided past him to lash home the Quakes' first goal.

The granddaddy of all designated players, David Beckham, still remains something of a mixed bag. Granted, the Englishman deserves credit for coming back from a ruptured Achilles tendon he sustained in March, but the sum total of his contribution to the Galaxy remains 55 appearances in four seasons. Not exactly what L.A. was expecting when it signed him.

All told, no team with a designated player has claimed an MLS title. 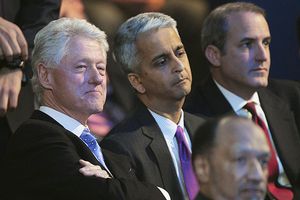 For all of the excitement that the U.S. World Cup run generated, it also left a nagging feeling of "what if?" The Americans were faced with a very winnable game against Ghana in the round of 16, and if they could prevail, a golden opportunity to reach the semifinals beckoned. But the same old weakness that had plagued the U.S. throughout the tournament -- a penchant for slow starts -- couldn't be overcome on this occasion.

Many have pointed to Bob Bradley's decision to start Ricardo Clark over Maurice Edu as the reason for the Americans' demise. After all, it was Clark who got stripped of the ball in midfield early in the match, starting the sequence that led to Kevin-Prince Boateng's fifth-minute opener. But there was no argument about the players Bradley had on the field in overtime, and yet that still didn't stop the Ghanaians from exploiting a U.S. defense that had been suspect all along.

All in all, a result that will leave the Americans tinged with regret.

Although the defeat to Ghana resonated the deepest, that was one game in one tournament. The opportunity to host the 2022 World Cup would have given the U.S. soccer community a huge boost for years to come. The fact that the U.S. bid team couldn't deliver the goods, ultimately losing out to Qatar, makes it the biggest disappointment of the year.

Adding to the angst: The American bid was rated the highest in terms of technical merit and potential economic impact. Yet Qatar proved far more adept at playing the political game than the Americans, effectively countering every strength the U.S. bid had. Although it's true that the entire process was tainted by a corruption scandal, it's also clear that the U.S. had no answer to the emotional argument that the tournament should go to the Middle East for the first time.

The game of soccer still has plenty going for it in the U.S., but the failure to land the 2022 World Cup means the long, hard slog of raising the game's profile just got a little harder.