HOUSTON -- Perhaps Landon Donovan is better coming off the bench after all.

Entering the match as a substitute for the second game running, Donovan's inch-perfect pass found Clint Dempsey lurking at the far post in the 76th minute, and the U.S. attacker stabbed the ball home to give the U.S. men's national team a 1-0 Gold Cup semifinal victory over Panama.

It was a vindication of sorts on a multitude of levels for the U.S. team. Manager Bob Bradley's gutsy -- and unexpected -- decision to sit Donovan again paid off. Freddy Adu, seeing his first action of the tournament, also repaid his manager's faith, by getting involved in the build up on the game-winner. 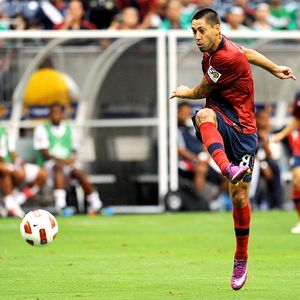 Don Emmert/AFP/Getty ImagesClint Dempsey scored the winning goal, but the build-up was a team effort with Landon Donovan and Freddy Adu in the mix.

But bigger than any individual contribution was the fact that after some shaky performances in group play, including a previous loss to the Canaleros, the U.S. finds itself in its fourth consecutive Gold Cup final. It has by no means been the easiest of roads, but the Americans are exactly where they hoped to be at this stage of the tournament.

Clearly mindful of Panama's threat on the counterattack, as well as the fact that the Canaleros were heavy-legged after being taken to penalties in their quarterfinal, the U.S. adopted its Death By 1,000 Paper Cuts offense in the first half. The Americans were perfectly content to possess the ball for long stretches and make Panama chase, even if it meant staying in their own half.

The U.S. eventually began to find success attacking down the right wing, and nearly broke on top in the 26th minute when Alejandro Bedoya released Steve Cherundolo down the right flank, and his low cross was nodded against the bar by Juan Agudelo.

That would prove to be as close as the U.S. would come to finding a goal up to that point, despite the fact that it continued to own the vast majority of possession.

With the U.S. maintaining a solid defensive shape, it was able to stifle most of the Panamanian attacks with ease. One exception was in the 45th minute, when both Michael Bradley and Jermaine Jones completely vacated the midfield and were out of position when the ball turned over. The attack ended with U.S. defender Clarence Goodson fouling Alberto Quintero on the left wing, but the subsequent set piece was squandered by Panama.

Donovan was brought on after halftime for Sacha Kljestan, but it was Panama that raised its game, as it began to press the U.S. higher up the field. This approach nearly paid off in the 62nd minute when Quintero's cross from the left wing barely missed Luis Tejada running into the box.

Panama continued to threaten from the left wing, but with the game seemingly headed for extra time, the U.S. finally made a breakthrough. A sharp exchange of passes between Adu and Michael Bradley found Donovan wide on the right wing, and his angled delivery found Dempsey, who outmuscled Panama defender Adolfo Machado to score the game-winner.

As the U.S. heads into the final, the big question is: Will Bradley continue to deploy Donovan in a substitute's role? Sacha Kljestan wasn't as effective in this match as he was against Jamaica and Dempsey scored his goal after moving into a forward role.

Of course, Bradley now has the luxury of a few days to decide and bask in the afterglow of a satisfying victory.

G Tim Howard, 6 -- He was so rarely tested in the first half he could have planted a lawn chair in his penalty area and been none the worse off. Was called upon more often in the second half, and did well to touch Armando Cooper's shot over the bar.

D Eric Lichaj, 5 -- Defended his side reasonably well, but his passes in the attacking third needed improvement. Not bad, but not great.

D Carlos Bocanegra, 7 -- Showed off his experience yet again with an effective aerial display. The way the defense has solidified around him since his move to the center has been telling. His late tackle on an Anibal Godoy chance in stoppage time proved vital.

D Clarence Goodson, 6 -- Relatively solid, although a bit foul prone at times. Had some timely tackles in the second half as Panama turned up the pressure.

D Steve Cherundolo, 5 -- Got forward with regularity and linked up with Bedoya well on the right flank. His perfect low cross was nearly put away by Agudelo. Was rarely troubled early on, but had difficulty denying service in the second half and was caught on the wrong side of his man in stoppage time, only to be rescued by Bocanegra.

M Michael Bradley, 6 -- Broke up numerous Panamanian attacks with some well-timed tackles. Was fairly precise with his passing and positioning, although he did get caught too far forward on occasion. Wasn't as dominant in the second half and should have been more unselfish when presented with a late chance.

M Jermaine Jones, 4.5 -- Wasn't nearly as tidy on the ball as he needed to be, and flirted with danger in terms of a yellow card. Was caught badly out of position on Panama's only effective counterattack of the first half. Cleaned up his passing in the second half, but conceded more space.

M Alejandro Bedoya, 6 -- Was caught in possession a few times, but was the primary conduit through which the most effective U.S. attacks went. His lofted crosses usually found their target, though the lower crosses needed to be a bit better.

M Sacha Kljestan, 5 -- Put in some good work on the defensive side of things, but wasn't impactful enough to last beyond 45 minutes, especially with Donovan on the bench.

M Clint Dempsey, 7 -- Was a bigger threat in the air than on the ground in the first half, as he got on the end of some long crosses to create danger in the box. Was quiet for long stretches of the second half, but was in the right place at the right time to notch the game-winner.

F Juan Agudelo, 6 -- Provided the kind of work that Jozy Altidore often doesn't, hustling on defense and making himself available in attack. Was unlucky not to score in the first half when his header hit the bar.

M Landon Donovan, 6 -- Had little impact initially after coming on, but there can be no denying the quality of his pass to Dempsey.

M Freddy Adu, 6 -- Played several sharp passes in the buildup to Dempsey's goal, including the one that released Donovan for the game's only goal.