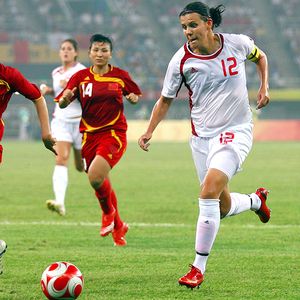 BERLIN -- The typical World Cup opener features a lavish ceremony, plenty of speeches and a comfortable win for the home team.

But Sunday's opener (coverage begins at 11:30 a.m. ET on ESPN) is a bit of a departure. For starters, it's not technically the first match -- that honor goes to France versus Nigeria. Germany then kicks off the tournament against Canada. And while Germany is the two-time defending champion and oddsmakers' strong favorite to win the Cup again at home, an unkind draw could spoil the opening festivities.

Canada is an experienced team ranked sixth in the world. It will host the next Women's World Cup in 2015 and is eager to make a good impression here.

To make matters worse for Germany, the Canadians aren't content to rise through the rankings by bunkering and hoping for the best. This team has a full complement of capable scorers, especially Christine Sinclair, who has six goals in two previous World Cups and is the leading scorer this season in Women's Professional Soccer.

So if this long-awaited grand occasion in Berlin's historic Olympic Stadium, with a sellout crowd of more than 70,000 people expected, causes German defenders any moment of distraction or any fit of nerves, Canada is perfectly capable of pouncing and putting the ball in the net.

Germany already has seen a jittery home opener when the country hosted the men's World Cup in 2006, and Costa Rica scored twice in a frantic 4-2 opener. Unlike Canada's women's team, Costa Rica was no top-10 team.

Canada has long honed its game against its southern rival, the United States, giving its neighbor many difficult battles over the years. It's Canada, not the U.S., that comes into the Cup with the CONCACAF title in hand.

Yet Canada resembles the U.S. in several ways. Many players finished their youth development in U.S. college soccer -- Sinclair scored 110 goals in just 94 games at Portland, and defender Candace Chapman and forward Melissa Tancredi won the 2004 NCAA title with Notre Dame. Several players are in Women's Professional Soccer or with Canadian-based teams in the North American W-League.

Like U.S. coach Pia Sundhage, Canadian coach Carolina Morace is a legend of the early days of women's soccer who has grafted some European possession-style play onto a strong base of athleticism. Morace scored 105 goals in her career with Italy and has won over the Canadian team to the point that players threatened a boycott until Morace and the Canadian federation could work out a deal to keep her in place through the 2012 Olympics. 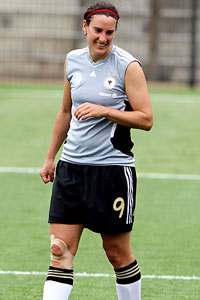 Martin Rose/Getty ImagesBirgit Prinz may not be in such a good mood after Germany faces a tough Canadian side on Sunday.

Forward Birgit Prinz has been around nearly as long. She is set to appear in her fifth World Cup, having scored 14 goals in her previous four. Should she score a goal at any time during this tournament, she would be the first player to score in five Women's World Cups.

Prinz's club career includes a stint with the Carolina Courage of the WUSA, but she, like her German teammates, passed on WPS to remain home in the Frauen-Bundesliga in preparation for the Cup. Though she plans to retire after this tournament, she's still a force at club level, scoring 23 goals in 18 games with Frankfurt in the 2010-11 season.

Prinz, 33, isn't alone in scoring in such prolific numbers past the age of 30. Teammate Inka Grings, 32, matched Prinz with 23 goals in 19 games for Duisburg. Kerstin Garefrekes, 31, needed 20 games to post her 23 goals alongside Prinz at Frankfurt. Martina Muller, 31, fell just short of the goal-per-game clip, netting 20 goals for Wolfsburg in 22 games. Berlin-born Ariane Hingst (31) and goalkeeper Nadine Angerer (32) also are back once again, and even the younger players have some experience. The face of the new Germany is Lira Bajramaj, whose family fled from Kosovo when she was young. Although she's 23, she's already appeared in one World Cup. Newcomers Alexandra Popp and Bianca Schmidt were on the Under-20 team that won the world title at home last year.

History is against Canada, which has never won its World Cup opener and never defeated a European team in the tournament despite a fourth-place finish in 2003. When these teams met in the 2003 World Cup, Sinclair staked Canada to an early 1-0 lead, but Germany ran rampant in the second half for a 4-1 win.

But Canada is coming into this game with a strong run of 2011 results, beating fellow Cup contenders Sweden, England and North Korea during the year.

And for all the experience and all the trophies Germany has collected, this Women's World Cup "opener" is the biggest game the team has played on home soil. So far.