Germany opens WC with a win 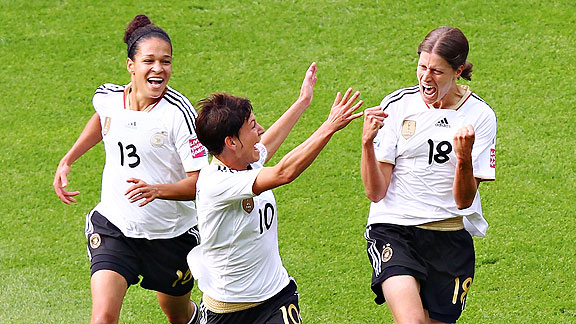 Martin Rose/Getty ImagesGermany beat Canada to open its World Cup campaign, but its defense looked shaky at times. That should give hope to Germany's future opponents.

BERLIN -- What's the sound of 73,680 people getting very nervous at the same time?

It's the sound heard in the majestic, historic Olympic Stadium in the 82nd minute Sunday, when Canada's Christine Sinclair beat a fully extended Nadine Angerer with a beautiful free kick to cut Germany's lead in half, to 2-1.

The crowd grew silent for about 30 seconds, then resumed chanting, hooting and whistling through an anxious finish until Germany, which had dominated play throughout, held on for the win.

The final whistle came just after Angerer, a mere spectator most of the game, bobbled a ball but pounced on the rebound. Sinclair had a chance to make Germany nervous in the early going, too, latching on to a pass from Diane Matheson but sending her shot over the bar.

German veteran Kerstin Garefrekes made it 1-0 in the 10th, outleaping her defender to head past Canadian keeper Erin McLeod, who had just frustrated Garefrekes from point-blank range.

Celia Okoyino da Mbabi made it 2-0 on a breakaway in the 42nd minute, and Canada struggled to get much going the rest of the way. Sinclair's goal was Canada's only official shot on goal.

Here are three things we learned from the game:

1. Germany's defense can be beaten. Sinclair will have two unpleasant memories from this game -- an elbow to the face from Germany's Babett Peter and her sixth-minute miss. How different would this game have been with an early Canadian goal?

Canada played aggressively, with three forwards listed in the lineup who did indeed spend most of their time up front pestering the German defense. With Canadian midfielder Diana Matheson also providing creative help, Germany labored to track the attackers.

Germany dominated midfield in the second half, but on a rare Canadian foray forward, Simone Laudehr brought down Sinclair to set up a dangerous free kick. Sinclair converted beautifully, ending Germany's World Cup shutout streak at 679 minutes. Another measure: Germany last conceded a World Cup goal in the 2003 final.

Canada beat the defense again on a late corner kick, but defender Emily Zurrer could not make clean contact from eight yards out.

2. Canada chose its goalkeeper wisely. Karina LeBlanc appeared at Saturday's news conference but did not get the start on Sunday. LeBlanc may well have turned in a strong performance had she earned the call, but Erin McLeod did nothing to punish coach Carolina Morace's faith in her.

The former Washington Freedom goalkeeper set the tone in the 10th minute with a diving, point-blank save against Garefrekes. She had a couple more strong saves and controlled her area well, but was twice let down by her defense in the first half.

The first German goal, in which Garefrekes simply outleaped her defender for a well-placed cross, was simply a case of an outstanding attacker beating her defender. The second German goal was more troubling. Left back Marie-Eve Nault, nowhere near the play, failed to advance with her linemates and left da Mbabi onside for a breakaway.

McLeod kept making saves in the second half, keeping Canada in the game and, perhaps more critically, limiting the damage in the first group-stage tiebreaker, goal difference.

3. Germany is still Germany. Bringing Alexandra Popp, Inka Grings and Lira Bajramaj off the bench? Surely this is the only team in the world for which they would have trouble getting a place in the starting lineup.

From the first few minutes of the match, the months of preparation were evident in the German offense. Precise passes and creative set pieces were the order of the day. And apart from Garefrekes' inexplicable miss on an open net with the game already decided, the attack hardly put a foot wrong.

The worst part for opponents is that with those subs coming off the bench, the pressure just gets worse. But the defense may face sterner tests in this tournament. The next time they let a world-class striker have a chance in the sixth minute, the Germans might not be so lucky.