The U.S women's national team lost a World Cup final Sunday. But as the memories of the Americans' heartbreaking defeat to Japan begin to fade, attention now turns to determining precisely what the team gained for both the players and the sport.

Certainly in the short term, the U.S. women gained what national teams in this country always do. Call it the Olympic effect, where applause, admiration and perhaps an endorsement or two find their way to the players involved.

But because it's soccer -- women's soccer, at that -- there is always the impulse to look for a broader meaning. Will women's soccer become more deeply embedded in the U.S. sporting landscape? Will the heroics of Abby Wambach and Lauren Cheney that were witnessed in Germany be enough to get Women's Professional Soccer off its deathbed so it grows into a sustainable professional league? Or will the vast majority of fans tune out until the team takes the field for next summer's Olympics in London? 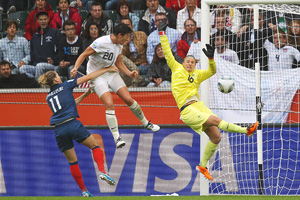 Alex Livesey/FIFA/Getty ImagesAbby Wambach's heroics helped create unprecedented buzz for women's soccer in the U.S. But will that give the floundering WPS a boost?

Without question, there was something about this U.S. team that resonated with the American public. You only had to look at the TV ratings and the record 7,000-plus tweets per second during the final to see that. The irony, of course, is that the U.S. entered this tournament with slightly diminished expectations. While the Americans were ranked No. 1 by FIFA and were considered among the contenders to win the title, they had lost enough games in the previous six months and showed enough inconsistency to lead plenty to question just how this team would perform. When the U.S. dropped its final group stage game to Sweden, these doubts were only reinforced.

The epic quarterfinal comeback against Brazil, in which the U.S. prevailed on penalties after Wambach's late goal tied the match in extra time, changed everything, however.

"What we saw in the two hours of U.S.-Brazil was phenomenal," said Peter Wilt, CEO of the Major Indoor Soccer League's Chicago Riot, and a former team executive in MLS and WPS. "I was blown away by what we saw in mainstream America in those two hours. Because of the way it happened, it got into the collective consciousness of the nation. That's phenomenal for the sport in general and women's soccer in particular."

But the fact remains that there is no magic wand that is going to all of a sudden vault the women's game to the point where it's selling out stadiums on the same level as the 1999 World Cup-winning team. The same long, hard, slog that has characterized soccer's progression in this country -- on both the men's side and the women's side -- looks set to continue. The exploits of the U.S. women's national team are just the latest chapter in the sport's growth.

"It's an evolution, not a revolution," said Wilt. "This is an important spike in the history of soccer in the United States. It's not that someday we're going to look back and say soccer has arrived and been mainstreamed. It's all of these little peaks, and each time it happens it's higher than the [one] before it. It all adds up and establishes the sport in the mainstream consciousness. It establishes credibility."

That spike is something that WPS is desperately trying to grab a hold of. Now in its third year, the league's foothold in the U.S. sporting landscape is tenuous at best. Through July 10, the six-team league was averaging 2,721 fans per game, a 24 percent decrease from the 2010 regular season numbers. There has been considerable upheaval in terms of teams folding, as well, with four teams going belly up in its brief history, including 2010 champion FC Gold Pride. Another team, the Washington Freedom, was relocated to Boca Raton, Fla., before this season and rechristened magicJack.

But WPS can count 36 players on its rosters that played in the World Cup, including 20 out of the 21 from the U.S. team. And given the buzz surrounding the just-concluded tournament, those associated with the league state that they intend to do everything they can to maximize the exposure the Women's World Cup has given them.

"It's been a tough haul to keep the league going and keep us all engaged," said T. Fitz Johnson, owner of the Atlanta Beat. "While we're all cautiously optimistic to keep this going, [the World Cup] is the shot in the arm that we needed. No way could we afford to buy that kind of advertising. It couldn't have come at a better time, and with the Olympics staring at us next year, we just need to build a bridge from this year to the Olympics next year."

Johnson indicated that in the two days that followed the U.S. triumph over Brazil, the team sold 1,200 tickets to their match on July 23 against magicJack, a game that is part of a leaguewide campaign called "See Extraordinary Heroes." Published reports indicate that the Western New York Flash's home game on July 20 against magicJack, a team that includes Rochester, N.Y. native Wambach, has already sold over 9,000 tickets with a sizeable walk-up crowd expected.

"I think getting those fans into the stadium is critical," said WPS corporate development officer and chief financial officer Kristina Hentschel. "When they see the product, they get to see these [World Cup] players play live in their market and I think they quickly become fans who want to support their teams. I think this will be critical for creating fans of those teams and sustained fans."

Creating sustained fans is the tricky part for any aspiring league, and there isn't much time. There are only three weeks left in the regular season until the playoffs start, leaving a small window of opportunity to avoid the "circus effect" where fans decide that sampling the product once is enough.

But perhaps the bigger opening is in finding additional owners willing to invest more money in the league. And certainly, the history of WPS in this area is checkered. St. Louis Athletica folded in the middle of the 2010 season when it was discovered that additional investors brought in by owner Jeff Cooper failed to deliver on promised capital. Other owners have shown little willingness to sustain annual losses that have run into the millions of dollars. 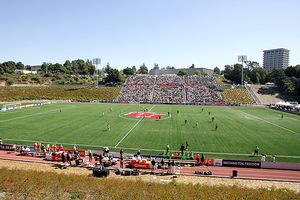 Andy Mead/YCJ/Icon SMI An all too familiar scene at WPS games is low attendance.

"There's no hiding the difficulty that we're running into with trying to get our model financially sound," said Johnson. "People are putting in a lot of work, myself included, to get a model that works to not only attract expansion, but attract expansion that works to sustain the game over a long period of time. We've seen our history, we've lost teams, and we've got to stop that. We've got to be able to say, 'We've got a plan that will get you through the years.'"

Johnson added that everything is on the table, from how the league office functions, to individual franchises, to player salaries. One league source told ESPN's David Hirshey that each team's salary cap would be slashed from its current level of $600,000 to a mere $350,000. But one consequence of that cut could be that the foreign players currently performing in WPS could decide to head home, especially with leagues in Germany and France beginning to attract additional funding. That option might become more attractive to American players, as well, especially in light of Ali Krieger's successful stint with FFC Frankfurt in Germany. It's a scenario that would lead to an erosion of the quality of play in WPS.

All the more reason, then, for Hentschel to line up prospective owners now. She indicated that there has been a "spike" in interest from potential investors, and that current Western New York owner Joe Sahlen, who moved his team from the semiprofessional WPSL into WPS this season, is the prototype for the kind of investor they are looking to attract. But Hentschel also said that any announcement regarding expansion will occur after the current season is over.

"We want to add expansion teams, but we want to make sure they're the right groups and that they're committed" she said. "We want to set people up to be successful, and we'll be patient if it's not the right time."

It's a delicate balance, but if the game of soccer, particularly on the women's side, is to move forward, the time needs to be sooner rather than later.