After the New York Red Bulls ended their eight-game winless streak by beating FC Dallas 1-0 on Saturday, you might have thought that coach Hans Backe would stick with a winning lineup, even if that particular starting XI was missing Thierry Henry, Rafa Marquez and Jan Gunnar Solli. But ahead of Wednesday's critical home match against Real Salt Lake, Backe said all three of those players would be taking the field.

"I think it will be good for us, having them back," said Backe of the aforementioned trio. "In Dallas we defended well, but we need to create a little bit more in our attacking game to win games, and definitely against teams like Salt Lake." 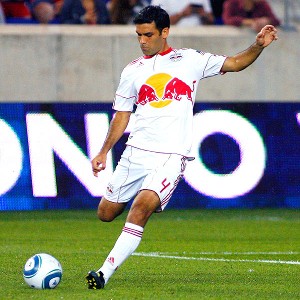 Andy Marlin/Getty ImagesRafa Marquez's performances haven't been anywhere near DP level, unless you're comparing them to those of former FCD midfielder Denilson, who remains the poster boy for DP busts.

In the cases of Henry and Solli, Backe's choice isn't that surprising. Henry is merely tied for the league lead with 12 goals, and in the past he struck up a productive partnership with Luke Rodgers, who celebrated his return from injury by scoring the only goal against FCD. Solli has been among the team's more consistent performers at right back and missed Saturday's game only because he was serving a one-match suspension for the ejection he sustained the week before against Vancouver.

The case for Marquez isn't so straightforward, however. The Mexican international's performances haven't been anywhere near designated-player level, unless you're comparing them to those of former FCD midfielder Denilson, who remains the poster boy for DP busts.

While Marquez assisted on Juan Agudelo's 68th-minute equalizer in the 1-1 draw against Vancouver, his passing during the rest of the match was shocking at times, and he looked nothing like a player who once donned the colors of Barcelona. For that reason, you wonder if New York wouldn't be better off with either Carlos Mendes or Stephen Keel at center back alongside Tim Ream, despite the massive edge in talent Marquez possesses. Yet Backe insisted the Mexican international, who missed the Dallas game because of an accumulation of yellow cards, would be back at his customary center back position on Wednesday.

"If we're going to have some kind of possession, or some kind of precise, accurate final passes, we definitely need Rafa Marquez for that in our buildup," said Backe. "If you look at how we played against Dallas, we just launched it in a way, and hoped for some breaks, turnovers, or set plays. There was no way we could control the game in any way."

The extent to which Backe's faith will be repaid will be quickly evident against Real Salt Lake. While both Marquez and Ream are adept on the ball, neither is an enforcer type, a trait that could come in handy against the size of RSL striker Alvaro Saborio. But Backe is hoping that such matchups, while inevitable, will be minimized by the presence of holding midfielder Teemu Tainio, who has proved to be irreplaceable this season. Without the Finn, New York's record is 0-3-3 with 11 goals conceded. And one of those matches included a 3-0 walloping at the hands of RSL on Aug. 6.

"Every time we are without Tainio, we have a problem," said Backe. "He's the guy who protects us in the back; he's the guy who wins the 50-50s. He's probably the only guy in midfield who is a cleaner, so he's massive for us."

And he's clearly more important than a certain designated player. 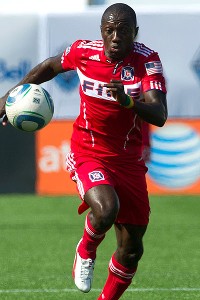 Rich Lam/Getty ImagesSince being traded to Chicago on March 23, Dominic Oduro has scored 10 times in the league, doubling his previous career high.

Oduro's transformation: For almost the entirety of Dominic Oduro's six-year professional career, the Chicago forward has been the most maddening of performers. Blessed with searing pace, the Ghanaian could always be counted on to get himself into fantastic positions to score, only to be let down by scattershot finishing. It was what caused Dallas, New York and Houston to give up on him. Yet ever since being traded to Chicago on March 23, something has clicked for Oduro. His game-winning tally against Chivas USA last weekend was his 10th league goal of the season, doubling his previous career high. He's also the first Fire player to reach double figures in goals since Damani Ralph reached that mark in 2004.

To hear Oduro tell it, he's landed in a spot where he feels trusted to get the job done, even in those games where he'll miss a chance or two.

"My teammates, we're like a family right now, and that's something that motivates you -- players who pick you up, encourage you," he said. "There's nothing more you can ask for as a player. I also think I'm really focused right now. That's pushing me forward and is motivating me."

That belief extends to the coaching staff. Interim head coach Frank Klopas, himself a former U.S. international striker, has worked extensively on the training field with Oduro to help him be more relaxed and confident in front of goal. "Oduro's got so much pace, and sometimes it's just about being able to lift your head up and see where the goalie is and place the ball," said Klopas. "Sometimes as a forward you feel like when you get chances you have to shoot it as hard as you can to put it by him. That's not always the case in most instances. Where's the goalie? Can I place the ball? Can I put it where I want to put it?

"A lot of his movements, we've tried to recreate that in training sessions, and put him in many different situations, and just go over it and over it. I think that has helped him be more relaxed in games."

Oduro has also benefited from an almost telepathic understanding with fellow Ghanaian Patrick Nyarko. Nyarko's seven assists lead the team, and he has combined with Oduro to form perhaps the fastest front-line pairing in the league.

"When I came to Chicago, it was just like from one countryman to another, and we just clicked," said Oduro about Nyarko. "On the field, we've been doing a great job, and there's a great combination between the two of us. We understand each other."

Morales return boosts RSL: The MLS roster deadline came and went last week with only a smattering of minor signings. Yet in some respects, Real Salt Lake gained a dynamic playmaker with the return from injury of midfielder Javier Morales.

Morales has been out since the season's seventh week, when his left ankle was broken on a tackle from behind by Chivas USA midfielder Marcos Mondaini. A little over four months later, Morales has nearly completed a miraculous recovery. The Argentine has been training with the team for three weeks, the last 10 days of which were without restrictions. While manager Jason Kreis was noncommittal as to whether Morales would play Wednesday against New York, the midfielder figures to see the field at some point in the next week or so.

One question that gets raised however is how to reintegrate such an important player into the team. RSL has survived pretty well without Morales. Will there be significant adjustments once he's back?

"I don't think so," said Kreis. "There were obviously conscious decisions made by the coaching staff about how we wanted to play when we lost Javier. Looking back on it, you could make some strong arguments for not having kept the same system and trying to play a different way. But as is typical of me, I was a bit hardheaded and wanted to continue on the same way. One of the thought processes in that decision was that I believed that Javier would be back. Now that he's nearing readiness, I think it should be a plug-and-play process."

Clearly, Kreis hated to lose a player who has been such a huge part of the team's success over the last several years. But in many respects the timing could not be better. Four consecutive victories have seen RSL make a recent push up the standings, and even if the team falls short of winning the Supporters' Shield, it could enter the postseason on a considerable roll, especially if Morales is back at the attacking controls.

"I think it could be another huge momentum swing for us," said Kreis of Morales' return. "I've seen it in the training sessions, actually. When you miss someone like that for as long as we have, you tend to forget what it was like to have him. Even from the first day, seeing him do a little bit of technical work, you could see that a lot of guys' moods were up. We've seen some of things in training sessions that make the guys around him better. When we get him on the game field, I think we'll take another positive step forward." 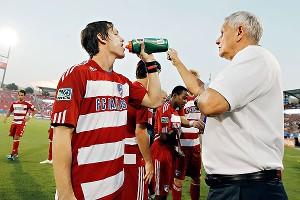 Brandon Wade/Getty ImagesNo rest for the weary: FCD manager Schellas Hyndman's team is 1-4-1 in its past six league games.

Is FCD running on empty? At the beginning of August, FC Dallas manager Schellas Hyndman knew the added games from the CONCACAF Champions League would take a toll on his team. He just didn't know how much.

FCD has recorded some impressive results in the CCL, including a 1-0 road triumph over Pumas, the first-ever such win by an MLS side. But the cost of such exertions is beginning to reveal itself. Dallas is 1-4-1 in its past six league games. Even worse, some players are starting to break down.

"[The schedule] has been a real challenge," he said. "We take every game serious, and it's the wear and tear on the players, the travel, the injuries -- it's all coming at a time where it's getting harder and harder to field our first team."

Hyndman indicated that Andrew Jacobson's ailing hamstring will likely limit him to one game per week for the rest of the season. Marvin Chavez sprained an ankle while on international duty, and Brek Shea picked up a groin injury while playing for the United States. As for injured MLS MVP David Ferreira, it appears that a Morales-like recovery is not in the offing just yet. Hyndman indicated that the Colombian is still three to four weeks away from resuming full training, meaning throwing him into a playoff game might be asking too much.

The result is that for Hyndman, fielding his best team has morphed into simply inserting whatever players are available into the lineup. And even that is proving tricky at this moment in time, when the jockeying for playoff positions is heating up -- and with no mercy being shown for last year's MLS Cup finalist.

"We don't know what's going to be available the next game, and for the next four games," he said. "But we're going to put other players on the field, and they're just going to have to find ways to perform."