What formation should the U.S. play? 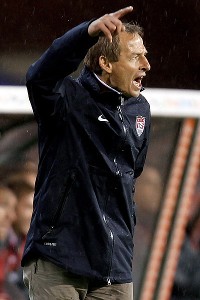 Friedemann Vogel/Bongarts/Getty ImagesJurgen Klinsmann has emphasized an attacking, 4-3-3 shape for the U.S. But does the manager have the players to effectively execute the strategy?

If there was one enduring image of Jurgen Klinsmann's first three games in charge of the U.S. men's national team, it probably occurred during last month's friendly against Costa Rica when a cross into the box from the right wing attempted to find U.S. forward Jozy Altidore. Not only did the pass miss its intended target, but there were no other options to be found in the opposition penalty area.

This was not an isolated incident. Outside of the first 30 minutes against Costa Rica, the Americans have struggled mightily to establish a sustained attack in the Klinsmann era. This has raised plenty of questions regarding his emphasis on attacking soccer -- after a mere three games, mind you -- and sparked numerous rounds of Formation Bingo among fans and pundits alike. Among the alignments suggested instead of the 4-3-3 Klinsmann has used (or 4-1-4-1, if we're being picky) are 4-4-2, 4-2-3-1, 4-4-1-1, and even the 3-5-2. About the only thing missing is the W-M.

Such suggestions tend to ignore that formations usually describe a team's defensive alignment. What happens offensively often is more free-flowing. Outside backs can venture forward to bolster the attacking numbers. An outside midfielder can be positioned higher up the field while his counterpart on the opposite flank can take up a more conservative starting position. Forwards can drop into midfield to aid in possession.

But in the case of the U.S., the central problem remains how best to get sufficient numbers forward. The answer, at least on the surface, hinges in part on two additional questions. One, do you deploy two forwards or one? Two, do you have one or two holding midfielders in front of the back line?

Deciding on the number of dedicated forwards has been an issue for some time. Bob Bradley used a lone forward during the first half of qualifying for the 2010 World Cup only to revert to a two-striker system when he started to run up against some of the same problems Klinsmann has encountered. Part of the problem is that the demands on the lone striker are many. This player needs to be mobile but also adept at holding the ball up. And oh, by the way, he needs to get in good positions to score.

Finding such a player has been challenging. Brian Ching was probably more capable than anyone else in holding the ball up during the past World Cup cycle, but he wasn't the most mobile of players. Altidore provides the best option at present, and although his hold-up play has improved considerably, he still has a ways to go in this area. He also has struggled to have an impact in matches when given such a role. When paired with another dedicated forward, such as Juan Agudelo, he's been much more effective, hence the calls for a two-striker system rather than the one for which Klinsmann has opted. 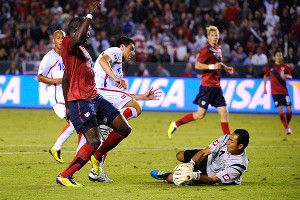 Kevork Djansezian/Getty ImagesThe U.S. has relied on Jozy Altidore to score goals, but has he had enough help in the box?

"I know the emphasis on a 4-3-3 is to take advantage of the space wide, but it seems like every time we get a cross in, there's one guy in [the box] against four, and that's not really conducive to scoring goals," said former U.S. international and Chivas USA assistant Jimmy Conrad. "There's got to be a commitment from midfield to get into the box, but I think with two forwards, you just put yourself in a better situation numerically to make stuff happen. I'm sure Altidore would appreciate having someone else to share the workload up top."

As to the question of dual holding midfielders, there was little ambiguity during the Bradley era. He clearly preferred the extra defensive security of a two-man shield, at least in theory. Given the ability of the U.S. player development system to churn out combative midfield types, this also played to the strengths of the players at Bradley's disposal.

By contrast, Klinsmann has opted for a single midfielder with defensive help coming from any of the other two central midfielders or even from the flanks. Although the approach is ostensibly to free more players to join the attack, it's also riskier. Then again, if the U.S. offense is to move forward, more emphasis on technical players and less on destroyers is exactly what is required.

"I think we've seen under Bradley what two holding mids looks like," Conrad said. "I think a lot of the results we got were because we were down a goal and had to push forward and didn't have two midfielders sitting next to each other anymore. Or we got a goal on a set piece. If we want to play the kind of soccer that I think everyone wants to play, then I don't think we can sit one next to the other."

But there are deeper problems. Barcelona has no issues getting sufficient numbers into the attack, even as recent years have seen the club shed bigger forwards like Zlatan Ibrahimovic and Samuel Eto'o. In fact, the calls to play with two strikers in some ways seem to mask the technical and tactical deficiencies in the U.S. team. For former U.S. national team assistant and Philadelphia Union manager Peter Nowak, this is what needs to be addressed.

"I don't think it's necessarily about the numbers [of forwards]," he said. "You can play 4-1-1-4 in attack; you can play different. It depends on if the players recognize situations -- for example, the ball goes wide, can we make the 20- to 30-yard sprints to be in the box? I think we struggle with that, to recognize that when the ball is moving a certain way, we know where the third, the fourth, the fifth pass is going to be, and we find ourselves in the box. Then everybody knows, 'OK, this is going to need a 30-yard sprint to be in the box, and then maybe 20 to 30 yards back to pressure the ball immediately so we can win it back.'"

Conrad agreed with Nowak's assessment and added that U.S. players have been almost conditioned not to take risks.

"I don't know if we play with enough reckless abandon at times to even dream about certain situations that may or may not happen," Conrad said. "Whatever disease has infected us as a country, it seems like we lack a little bit of conviction in the final third."

Having a problem-solving mentality on the field is another issue. Although a formation can act as a blueprint for how a team wants to play, the game itself can force players to confront tactical hurdles on the fly. In a U.S. sports culture where players are conditioned to look to the sideline for guidance, the ability to improvise is not ingrained.

Nowak said, "The players need to make the decisions on the field, what is the best in the moment, not looking toward the bench asking the coach, 'Coach, what should I do?' I think that right now that is the most important factor we need to improve as a nation, not only the national team but all of us."

Such obstacles were apparent in the 1-0 loss to Belgium last month. Although the U.S. had some spells of possession early on, it rarely managed to work the ball into spots that threatened the Belgian goal. As the game progressed, the off-the-ball movement needed to sustain attacks began to erode.

"When the U.S. finally did go forward, the distances between Clint Dempsey and Jose Torres and Robbie Rogers and Brek Shea in reference to the 18-yard box, in reference to the [lone forward] was so big that it's very hard to bridge those gaps," said former U.S. U-20 head coach Thomas Rongen. "That's a full-out 50-yard sprint. And if you don't get comfortable by moving the ball and getting your lines up, and the attack does break down after the fourth or fifth pass, you'll never get those players in those positions, either. So it's a combination of getting a little bit better technically and tactically."

These are the issues that Klinsmann is grappling with as he tries to move the program forward. And clearly, implementing the 4-1-4-1 system has pushed the U.S. out of its comfort zone and given more opportunities to technical players.

Does the new manager have the players to pull it off? The losses to injury, at least for the moment, of Torres and Stuart Holden raise more doubts. And given the general scarcity of these types of players, it can be argued that Klinsmann is choosing a system that is not aligned with the available talent. Then again, he is taking the long view, and it's unrealistic to expect such a philosophical change to bear instant results. We know what the U.S. can achieve out of a 4-4-2 in which it tries to counter against the best teams. What Klinsmann is attempting is uncharted territory, and may yet allow the U.S. to break out of its label as CONCACAF heavyweight and little more.

"I really like what Klinsmann has tried to do so far," Rongen said. "And he may reach the same conclusions that Bob [Bradley] and Bruce [Arena] did, that we are more northern European at this particular time than we are southern European or South American. We need a target striker, a big guy up front with a smaller guy underneath. We need out of a 4-4-2,guys like Donovan and Dempsey who can go up and down. But I like the fact that at least he's trying."

For his part, Klinsmann doesn't give the appearance of a man inclined to abandon his principles at the first sign of difficulty. His tenure as manager of Germany was littered with potholes and difficult results, all while transforming the team into more of an attacking force. The U.S. likely will encounter similar difficulties, but if Klinsmann is successful, he may transform the program regardless of the formation he employs.