Previews, predictions for N.Y. vs. L.A., and RSL vs. Sounders

For the past two seasons, the power center in Major League Soccer has resided squarely in the Western Conference. Last season, the West produced both MLS Cup finalists, and this campaign it contained the four highest point totals in the league.

But the structure of the MLS Cup playoffs is such that the best teams will knock one another out long before the MLS Cup final on Nov. 20. And the presence of an Eastern Conference interloper, the New York Red Bulls, raises the incredible possibility that no West teams will survive. 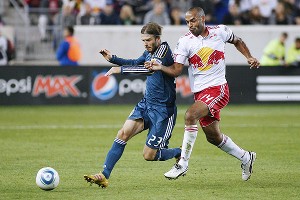 There will be no shortage of star power when these two teams square off, with six designated players possibly seeing the field in this series. The Galaxy were the league's best team during the regular season, while the Red Bulls were the most inconsistent. None of that matters now, though, as New York has crashed the Western Conference party and will try to prevent the Galaxy from claiming the championship that has eluded them during the David Beckham era.

The biggest concern for New York will be trying to replace suspended right back Jan Gunnar Solli for the first leg. The Norwegian was ejected in the Red Bulls' wild-card-round win against Dallas, and with Chris Albright ruled out because of a calf injury, manager Hans Backe likely will turn to Carlos Mendes.

Mendes is a capable defender, but he has played primarily in the middle, and putting him up against Donovan's pace looks to be a mismatch. Backe could slide Dane Richards from forward to the right side of midfield in a bid to give Mendes some help, and Donovan's hamstring injury may slow him down a bit, but look for L.A. to try to isolate Donovan against Mendes as much as possible.

Gonzalez has enjoyed a stellar season that should result in the defender of the year award. Not only does he provide a rugged presence in back, but he also is a massive threat on set pieces. Juninho is the team's unsung hero, doing much of the dirty work so Donovan and Beckham can orchestrate the attack, the latter with his laser-guided, long-range passing.

Ream answered some of his critics with a strong performance against Dallas, although it wasn't mistake-free. While Marquez's passing has improved in recent weeks, his defense remains suspect, and Juninho may try to exploit that weakness with his late runs. Henry remains a premier attacking threat, but his defense against Dallas midfielder Daniel Hernandez helped disrupt FCD's attack, and it will be interesting to see whether a similar approach is tried against Beckham. 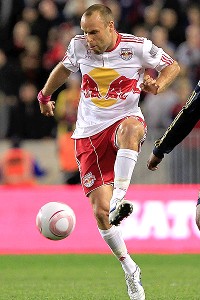 Chris Trotman/Getty ImagesJoel Lindpere is New York's steadiest performer on both sides of the ball.

Cardozo got off to a slow start this season but has come on strong of late, earning a starting spot ostensibly as a wide midfielder with license to tuck inside. He provides another creative element in midfield, taking pressure off Donovan. Lindpere remains New York's steadiest performer on both sides of the ball, and he showed off his ability to pop up for killer goals by scoring the only goal of the game against Dallas.

Outlook: Based on regular-season form, L.A. should win this series comfortably, but the playoffs rarely follow the form book. If L.A. has a weakness, it's a lack of depth up top, although Robbie Keane has recovered from a left adductor strain and should be available for the first leg. Chad Barrett has also enjoyed something of a rebirth this season with seven goals, and combined with Keane, they should give the Galaxy sufficient firepower.

Given the way L.A. spreads the scoring load, forward production won't be a requirement. Beckham, Juninho and especially Donovan are more than capable of finding the back of the net, too. And the L.A. defense, led by Gonzalez and the underrated A.J. DeLaGarza, has used its combination of toughness and speed to put a hermetic seal on the Galaxy goal.

New York has become the most dangerous of playoff teams, a talented side with absolutely nothing to lose. Injuries have cut into the team's midfield depth, but in Mehdi Ballouchy and Stephane Auvray, Backe has options. That said, L.A. would appear to have a hefty edge in that area of the field, especially on the defensive side, and that likely will be what carries the day.

The Western Conference semifinals seem far too early for these two teams to meet, given that Seattle finished second and RSL third in the overall standings, but that is the way things have played out. Seattle will try to claim its first playoff triumph in its three-year MLS history, while Real Salt Lake will try to shake off a season-ending six-game winless streak and regain the mojo it displayed earlier this season. 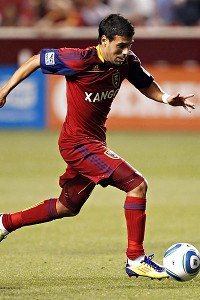 Morales missed much of the campaign because of a broken left ankle and returned in the past month. With his ability to find gaps between the midfield and back lines making him very tough to defend, Morales remains RSL's attacking hub. Who will stop him? That responsibility largely will fall to Alonso, who is Seattle's primary ball winner and whose tidy distribution is often called upon to kick-start the Sounders' attack.

Keller is weeks from retirement, but he has played at a level deserving of the league's goalkeeper of the year award. Fernandez is the team's silent assassin, and with fellow midfielder Mauro Rosales out for the first leg because of a right MCL sprain, his sharp passing and nose for goal -- he tallied nine in league play -- will be relied upon even more. Montero delivered MVP-caliber numbers this season with 12 goals and nine assists yet has failed to deliver in previous playoff appearances. That is something he'll be keen to change this time around.

Olave will be among the defenders tasked with stopping Montero, and he clearly has the size and speed to cope with his countryman. Beckerman returns to the lineup after missing most of the past six games thanks to a combination of international duty and suspension. His tenacity is a vital component of RSL's midfield, but he'll need to stay disciplined against a talented opponent. Espindola recorded 10 goals this season, and his ability to beat defenders off the dribble adds a unique element to the RSL attack.

Fucito's two goals and two assists don't necessarily dazzle the eye, but he's the kind of pest whom defenses hate to play against, with his high work rate and darting runs making it difficult for opponents to play out of the back while creating space for the likes of Montero in attack. Rimando has long been one of the more clutch goalkeepers in MLS, with his shot stopping and distribution among the best in the league. He also has a history of prevailing in penalty shootouts, with the 2009 MLS Cup final his most recent success.

Outlook: If there is one conference semifinal that is destined to go to penalties, this is it. These two teams are evenly matched, having each prevailed in the opponent's home stadium during the season. If there is a difference between the two teams, it lies in Seattle's more varied attack that contains the likes of Fernandez, Brad Evans and Montero. But the possible loss of Mauro Rosales looms large. The Argentine has often provided the creative spark needed to unleash the likes of Montero yet looks set to miss the first leg because of a recurrence of the right MCL sprain that he first injured a month ago. There is more to Seattle than just Rosales, and Seattle did beat RSL at Rio Tinto Stadium, but the Sounders are clearly a better team with him and can only hope he recovers in time for the second leg.

RSL is among the more talented teams in the league but has been struggling mightily of late, going 0-4-2 down the stretch. Although the absence of Beckerman for much of that streak is pointed to as the primary reason for the team's poor form, few other elements of RSL's lineup have been excelling, and there is risk in placing too much faith in Beckerman's return being the cure-all for what is ailing the side.

The front-line tandem of Alvaro Saborio and Espindola combined for 21 goals this season. If they get the necessary service from midfield, they can do plenty of damage. Therein lies the challenge for both sides. Whichever team wins the midfield battle and is more adept at setting up its front-runners will carry the day. Even without Rosales, Seattle appears to have more elements operating closer to peak form, so expect the Sounders to prevail by the narrowest of margins.