Five thoughts from the MLS playoffs

The first legs of the conference semifinals are now in the books, and the MLS postseason lived up to its reputation for producing the unexpected and, in some cases, the downright bizarre. Seattle imploded in spectacular fashion against a Real Salt Lake side that shook off its late-season funk to produce a rampant display. Sporting Kansas City and the Houston Dynamo delivered thoroughly professional performances to prevail on the road, although the Dynamo were made to sweat a bit at the end.

As for the encounter between the L.A. Galaxy and the New York Red Bulls, the Galaxy won the game, but came out on the short end of a postgame fracas that resulted in Galaxy midfielder Juninho and Red Bulls counterpart Rafa Marquez both getting sent off.

With that in mind, here are five thoughts from the weekend's conference semi tilts. 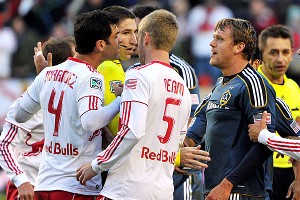 Christopher Pasatieri/Getty ImagesRafa Marquez has been a source of trouble for New York on and off the field this season.

1. What happened to playoff composure?

This goes beyond the altercation in New York. Seattle midfielder Osvaldo Alonso was highly fortunate not to be sent off in Saturday's match against RSL after he put his hands to the face and neck of Real striker Alvaro Saborio. Sporting Kansas City forward Kei Kamara got away with a slap to Colorado defender Miguel Comminges, and easily could have received far more than the verbal warning he was given by referee Baldomero Toledo. Houston midfielder Adam Moffat's two-handed shove to the chest of Union defender Sheanon Williams risked undoing what was otherwise an impressive team performance.

Some will label this as passion and a sign that the playoffs are here. But it doesn't take much for passion to morph into rank stupidity that threatens, and in some cases succeeds in, hurting the team.

Of course, Rafa Marquez has been doing that to New York for a while now, both on the field and off. And this latest incident, in which he sparked a post-match melee by throwing the ball at Landon Donovan, is the latest entry on what has proved to be a lengthy rap sheet. The only mitigating factor is that L.A. midfielder Juninho was goaded into getting a red card, as well. Given the Brazilian's greater importance to the Galaxy, especially on the defensive end, advantage New York.

Perhaps playing an extra playoff game was the best way for MLS to punish teams that sneak into the playoffs. Both sides that prevailed in the wild-card round -- New York and Colorado -- lost the first leg of the conference semifinal at home, and after losing three players to injury against Sporting Kansas City, Colorado manager Gary Smith will be struggling to scare up enough healthy bodies for the return leg on Wednesday.

But it isn't just the wild-card teams that are suffering from having to play the return leg on short rest. While Real Salt Lake reveled in its 3-0 thumping of Seattle, the fact starting center backs Jamison Olave and Nat Borchers had to leave the game because of quadriceps injuries makes the second match less of a formality than it might otherwise be. Both players are listed as questionable for the match, according to an RSL spokesman. But whether they play or not, a full week of rest would no doubt have helped Real's cause. Without question, the compressed schedule -- caused in part by an international fixture date in mid-November -- will make winning MLS Cup as much about healing off the field as playing well on it. 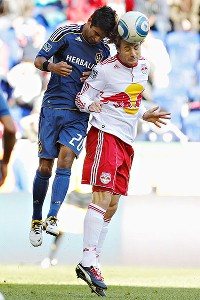 Mike Stobe/Getty Images Forget the beautiful game. A.J. DeLaGarza and the Galaxy are all about practicality, not pizzazz, in the postseason.

3. Another year, another lesson in L.A.'s ruthless pragmatism

Last season, the Galaxy stymied Seattle in the first leg with an effort short on aesthetics and heavy on defensive effort. On that day, both David Beckham and Landon Donovan could be seen tracking deep into the Galaxy's half to make sure no breakdowns occurred on the wings. Fast-forward 12 months, and L.A. again revealed that in the playoffs practicality trumps pizzazz. The Galaxy made it clear early that limiting chances was the priority, with Donovan and Mike Magee thinking defense first. And while New York carved out some opportunities at the start of the second half by being more direct, L.A. soon adjusted, with A.J. DeLaGarza delivering a sharp performance that may soon see him emerging from the shadow of teammate and likely Defender of the Year winner Omar Gonzalez.

While L.A. is likely to be a tad more adventurous when it plays the return leg Thursday at the Home Depot Center, its rock-solid defense remains the platform upon which its success is built.

The shock of Seattle's loss wasn't so much that it occurred -- Real turned Rio Tinto Stadium into a fortress long ago -- but rather that its midfield basically went missing for the duration of the match. Granted, RSL has imposed its will and dominated more than a few teams. But midfield was an area that was expected to be contested on equal terms, and instead it turned into a complete mismatch. Lamar Neagle's relative inexperience was exposed, especially where his defensive positioning was concerned, but that excuse can't be used for the likes of Brad Evans, Alvaro Fernandez and Alonso. These are players with plenty of battle scars. Fernandez has played in a World Cup. Evans and Alonso have played in numerous MLS playoff games, not to mention CONCACAF Champions League encounters, with Evans helping Columbus to an MLS Cup in 2008. If Seattle is to have any hope of conjuring a playoff miracle, it will need its midfield to ratchet up the intensity while making sure that emotion is channeled in the right way.

When you think of Houston's MVP, the obvious choice is Brad Davis. After all, we're talking about a player who led the league in assists. But sometimes value goes beyond mere numbers, and in light of Sunday's 2-1 first leg win over Philadelphia, another vital cog has emerged in midfielder Luiz Camargo.

Camargo's raw production of two assists in nine league and playoff matches doesn't do much to catch the eye. But in the Brazilian's case it's more about what his insertion into the lineup has allowed others to do. Teams are no longer free to focus their defensive attentions exclusively on Davis, and more critically, Geoff Cameron has moved from the center of midfield back into the heart of Houston's defense.

The results have been telling. In Houston's past seven league and postseason matches, the team is 5-0-2 with six goals conceded. Cameron had some shaky moments early in the match, and his ill-advised foray upfield late in the game will no doubt earn him a talking-to from manager Dominic Kinnear. But it's highly unlikely that the Dynamo would have weathered Philadelphia's second-half barrage on Sunday without Cameron in defense, proving once again a team's success is based on how effectively its components fit together.