Five thoughts on the MLS playoffs

Where have all the low seeds gone? Home, of course -- most of them, anyway. After last year's bracket-busting bonanza that saw the higher seed triumph just twice in seven attempts, a smidgen of sanity and predictability has returned to the crapshoot that is the MLS playoffs. This year, the higher seed has prevailed in five of the eight playoff matchups.

Yet the ghost of low-seeded champions hasn't been exorcised just yet. It turns out one interloper remains. Sure, Houston was the No. 2 seed in the Eastern Conference, but the Dynamo had the seventh-best record overall in MLS, putting the team on par with (gasp!) last year's unloved champion, the Colorado Rapids, and only one spot above 2009 winner Real Salt Lake, which took home the trophy from the eighth position. If Houston prevails, it will once again prove that it's not where a team is seeded in the MLS playoffs, but how it performs. And on that score, the Dynamo are arguably the hottest team in the league over the past two months.

Here are five more thoughts on the MLS playoff weekend that was. 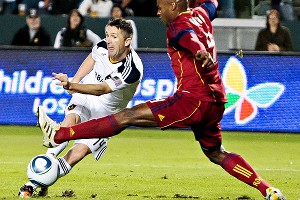 AP Photo/Bret HartmanRobbie Keane is rounding into form at the right time.

1. Keane finding his form. Can he keep it?

Robbie Keane's first months in MLS have seen slowed by an adductor injury that he picked up while on international duty with Ireland. Yet his performance against RSL demonstrated that he is at last getting back to his best. Not only did he score a well-taken insurance tally against Real, but his fitness, and therefore movement off the ball, is returning to its peak.

The only downside is that this week Keane will be with Ireland in a bid to secure qualification for Euro 2012. Galaxy coach Bruce Arena will be hoping that his star forward can emerge from the two games against Estonia unscathed and be even sharper for the MLS Cup final.

The precision of David Beckham's crosses remains surgical, and Landon Donovan reminded us that he can still impact the game in the attacking half. But the playoffs are a stage where some heretofore lesser lights grab the headlines. Galaxy midfielder Mike Magee continued to terrorize opposition defenses, notching his league-leading third goal of the postseason. Teammate Juninho provided the requisite defensive cover needed for the likes of Beckham and Donovan to shine. And Juninho's performance was possible only because Chris Birchall did an admirable job of filling in for the Brazilian in the second leg against New York.

Further east, Houston's Andrew Hainault popped up for his second goal of the playoffs in a 2-0 win over Sporting Kansas City that put the Dynamo in MLS Cup. Houston also benefited from the play of Corey Ashe, who stepped into the left midfield role after Brad Davis was forced to leave the match with a right quadriceps injury. While Ashe didn't match Davis' set-piece wizardry-- that was left for Adam Moffat, another member of the lunch-bucket brigade -- Ashe's defense in front of substitute Jermaine Taylor helped keep SKC's Kei Kamara in check.

3. Yes, Houston has a chance to beat L.A. in the final, even without Davis

Without question, L.A. is the favorite to become the second MLS side to claim the league championship on home turf. (The 1997 edition of D.C. United is the only team to have that honor.) That position is reinforced now that it looks like Davis' injury will reduce him to the role of spectator.

Houston is still plenty capable of springing an upset, however. First, coach Dominic Kinnear's outfit is the best defensive team in the league at the moment, with Houston's goal having been breached only once in the postseason. Second, the Dynamo's proficiency on set pieces remains astounding, with Hainault's goal on Sunday starting from the foot of Moffat. And that area is precisely where L.A. looked vulnerable in the Western Conference final, with Real Salt Lake scoring once and squandering two other gift-wrapped opportunities.

4. Sporting Kansas City is not that far away

The job SKC manager Peter Vermes did in guiding his side to the Eastern Conference regular-season crown is worthy of the league's Coach of the Year award. The pieces the former U.S. international has assembled on the attacking end are quite impressive. Yet if the loss to Houston on Sunday revealed anything, it's that some tweaking, especially to the back line, is needed. Matt Besler made considerable progress this season and remains a player for the future. But while Aurelien Collin popped up for some critical goals down the stretch, his decision-making against the Dynamo -- particularly in terms of when to play the offside trap and when to drop back and give ground -- remains suspect. Look for Vermes to bring in reinforcements next season. 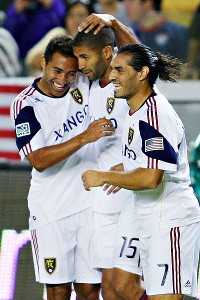 Victor Decolongon/Getty ImagesRSL's front-line pairing of Alvaro Saborio (middle) and Fabian Espindola (right) was a huge boost to the team's attack in 2011.

One irony about RSL is that the team coach Jason Kreis put on the field this season seems well ahead of the squad that claimed the 2009 MLS Cup. Many of the components are the same, with the back line and midfield nearly identical to those that triumphed against the Los Angeles Galaxy two years ago. But the team is more experienced and cohesive now than it was then, and the front-line pairing of Alvaro Saborio and Fabian Espindola is in some ways more consistent than the 2009 duo of Robbie Findley and Yura Movsisyan.

Yet 2011 was bookended by agonizing disappointment. The year started out with the team narrowly missing out on winning the CONCACAF Champions Cup, losing to Mexican side Monterrey 3-2 over two legs. In between, RSL overcame what should have been the lethal blow of losing Javier Morales to a broken ankle to finish third on the overall league table. But in the end, a failure to convert some early chances against L.A. saw RSL fall in the Western Conference final.

At Sunday's postgame news conference, Kreis hinted that changes will be made because "we should always try to get better." Time will tell if that will be enough to get RSL back to the summit.