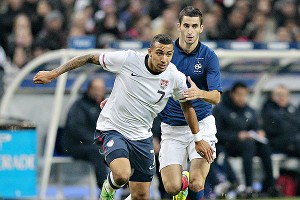 Jacques DeMarthon/AFP/Getty ImagesLogic lock: Danny Williams is a holding midfielder, yet Jurgen Klinsmann has been playing him on the right side of midfield.

The honeymoon is over for Jurgen Klinsmann, and although it's too early to panic, there is definitely reason to worry.

A little more than three months ago, amid much fanfare, Klinsmann was hired to lead a U.S. men's national team that had become stagnant. But the optimism that accompanied Klinsmann's appointment has started to evaporate. The former German international finds himself with a record of 1-4-1 heading into Tuesday's encounter against Slovenia in Ljubljana, Slovenia.

Granted, basing a team's success or failure exclusively on friendly results is a shaky proposition at best. Such games are more about performance than the score line. But the U.S.'s form on the field is precisely why skepticism is beginning to surround Klinsmann and his methods. When the onetime German national team manager was hired, he was supposed to usher in a new emphasis on attacking soccer. Instead, the U.S. has scored two goals in six games, and aside from an impressive opening 30 minutes against Costa Rica in September, rare have been the moments when the Americans showed a sustained attack.

The reasons the U.S. offense has looked so sluggish under Klinsmann are varied. Without question, any change in coaches requires a transition period. And it's not as if the U.S. has been playing minnows along the way. Mexico, Belgium and France, in particular, did plenty to knock the U.S. out of its comfort zone.

But in an ironic twist, it was Friday's match against France that was the most alarming. Although the U.S. pressed higher up the field defensively than it did against Belgium, it was almost as though Klinsmann was taking a page out of predecessor Bob Bradley's playbook, except with worse planning and execution. There were the two holding midfielders -- in this case, Kyle Beckerman and Maurice Edu -- who, while defending tenaciously, offered little in the attacking third. That left a good chunk of the creative responsibility to wide players Brek Shea and Danny Williams, neither of whom came close to fulfilling that role. As a consequence, the U.S. had to rely on its Archangel Offense, with Clint Dempsey expected to save the day. But when the Fulham attacker dropped deeper and deeper into midfield in a bid to kick-start the attack, the French responded by repeatedly fouling Dempsey. Forward Jozy Altidore, meanwhile, was left isolated.

"[The U.S.] has to figure out a way to manufacture that confidence that usually comes with winning," said Fox Soccer Channel analyst Jimmy Conrad. "From the outside, it just doesn't look like they're all on the same page. That has to come from the coaching staff. Obviously, the older guys can help with that, too, but that's an atmosphere and an environment that the coaching staff has to produce.

"That comes with a game plan that everybody feels confident in. If you put out a game plan that hasn't worked for a few games, and you're still going back to that same game plan, then you're already going to get guys that feel a certain way about it before they step out onto the field, and I wouldn't say it's necessarily inspiration."

[Bradley] used to get killed for being more defensive-minded, but I think he probably put guys in better spots that suited their strengths a little bit more.

That is especially applicable to Klinsmann's decision to persist with Williams in a wide midfield role. Friday's contest marked the third time that the Hoffenheim midfielder, who usually plays in a holding role for his club, was tried out wide, and for the third match running, he looked completely uncomfortable. Is it any wonder, then, that the U.S. struggled to create chances fielding three holding midfielders in the same lineup?

"[Bradley] used to get killed for being more defensive-minded, but I think he probably put guys in better spots that suited their strengths a little bit more," Conrad said.

There are those who will argue that playing Williams in such a position has little downside. With World Cup qualifying seven months away, now is the perfect time to experiment. It's also hoped that Klinsmann will have more options going forward. The upcoming MLS Cup final rendered Landon Donovan unavailable, while a recurring knee injury has prevented Stuart Holden from making his first appearance in the Klinsmann era. If available, both players would seem to be a lock to start ahead of Williams and perhaps allow him to move to a position where he's more comfortable.

But as the last World Cup cycle so brutally proved, nothing is guaranteed in terms of player availability. Injuries, age and poor form can all conspire to wreck the best-laid plans. Only now is Oguchi Onyewu getting back to his best after tearing his patellar tendon two years ago. Charlie Davies, as miraculous as his comeback has been, may never be the player that he was before sustaining injuries in a car accident in 2009. It serves no useful purpose to pine for players who for whatever reason aren't available. 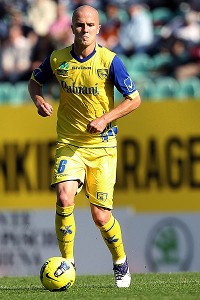 Gabriele Maltinti/Getty ImagesOne glaring omission in Klinsmann's team has been Michael Bradley, who would add attacking depth -- the manager's stated mission -- to the midfield.

And although it's perfectly fine to experiment, it's also reasonable to expect said experiments to have an internal logic to them. So rather than fit a square peg (Williams) into a round hole (right midfield), Klinsmann ought to be taking a look at players like Sacha Kljestan or Benny Feilhaber. While Kljestan was named to the roster for friendlies against Costa Rica and Belgium in September, he was omitted this time around. Feilhaber has yet to get any looks from Klinsmann. That's not to say either performer is the second coming of Andres Iniesta, but both players would seem to fit the mold of the attack-minded player keen on helping the team build out of the back and through the midfield.

There have been other odd choices by Klinsmann. Although his interest in Robbie Rogers and Michael Orozco-Fiscal has cooled, it remains puzzling when juxtaposed against the duo's sketchy form at club level. Michael Bradley's continued omission from the lineup is another head-scratcher, if only because he offers a bit more going forward than either Edu or Beckerman. And unlike the lead-up to this past summer's Gold Cup, Bradley has been getting steady playing time for Chievo Verona in the Italian Serie A.

It's possible that in time, Klinsmann's decisions and the players he's placed faith in will begin to coalesce and make sense in time for World Cup qualifying. But the longer the U.S. continues to struggle, the more questions will be raised about Klinsmann's effectiveness. That's not the mindset you want to have when the games start for real.