Could Drogba replace Beckham in L.A.?

With David Beckham making amorous glances toward Paris St. Germain and vice versa, it was only a matter of time before speculation began about who might be the Englishman's marquee replacement with the Los Angeles Galaxy.

Thierno Seydi was only too happy to oblige.

Seydi is the agent for Chelsea striker Didier Drogba, whose contract runs out at the end of the season. It's understood that Drogba wants a new two-year contract, while the Blues are insisting on a one-year deal, which naturally displeases Seydi to no end. 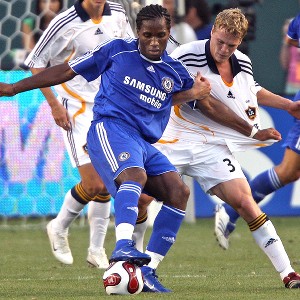 "[Drogba] will go where he is offered the most money," Seydi told The Guardian. "It could be the United States, Russia, Qatar or somewhere else in Asia. Once you are well into your 30s you have to go to a club where you can be certain you'll be able to pay your bills. L.A. Galaxy are a possibility among many others."

Now, it's entirely possible that Drogba could end up stateside, but Seydi's comments mark the umpteenth time that an MLS club has been used as leverage in a contract negotiation with an overseas club. And it's important to remember that in most cases, the more an agent talks up MLS, the less likely a deal is in reach.

There's another reason the possibility of Drogba taking his talents to Manhattan Beach is unlikely, and that has to do with the traits of the man he would be replacing. It's not Beckham's goals that will be missed -- he had only two in 30 league and playoff appearances this season -- but rather his 15 assists. And for all the talk about how a proposed partnership of Drogba and Robbie Keane would play out, the bigger issue is who would get them the ball. Sure, Landon Donovan and Juninho -- assuming his loan from Sao Paulo is made permanent -- are crafty enough. But Beckham's play in the center of midfield will be especially difficult to replace should he depart. So for all the talk about Drogba, a player like Bayer Leverkusen midfielder Michael Ballack -- who is also rumored to be looking at MLS -- would be a better fit for the Galaxy. Not only can he impact games from the center of the park, he can chip in with goals as well.

Solid marks for Montreal: It's almost an annual rite of passage in MLS. An expansion team makes its first forays into acquiring players, and when the dust has settled from the expansion draft, the impulse is to think "That's not a bad team." Of course, as last season proved with Portland and in particular Vancouver, what actually happens on the field is a different matter entirely.

But the early returns from the efforts of Montreal manager Jesse Marsch have been largely positive. The team now has some good experience in midfielder Davy Arnaud, defender Nelson Rivas and goalkeeper Donovan Ricketts. There are some intriguing younger prospects like Bryan Arguez and Collen Warner, with more to come in January's SuperDraft. But Marsch is well aware of how tough expansion teams have it, having gone through it with the Chicago Fire in 1998. 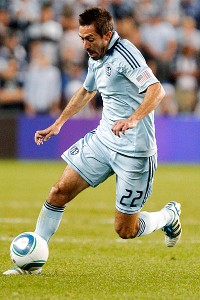 "We're committed to putting a competitive team on the field that wants to win, no question," he said. "But I would be arrogant to say that we think we can just get players and put them on the field and be a winner immediately. This takes time. I don't care whether everyone wants to talk about what we did in Chicago when we won the double the first year. There was a process there as well. It wasn't, from the beginning, all magical. It takes time, and becoming a team isn't just about the players; it's about a mentality and how the group comes together and pushes themselves every day to get better. That's what we want to be about."

That said, Marsch has taken a poker player's approach to the last few weeks, keeping some signings in his back pocket to better disguise what his team's needs are.

"The marketing team wants me to announce every player, every day," he said. "We've just tried to be shrewd about the kind of business that we are."

Hard questions in Houston: Marsch's approach has won him few fans in Houston, where the Dynamo is taking some deserved heat for its handling of what is now known as the Brian Ching Affair. Mindful of Ching's age, as well as his $400,000-plus yearly salary, Houston manager Dominic Kinnear gambled that Marsch wouldn't select the Dynamo forward in last week's expansion draft. That strategy backfired when Marsch made Ching the first overall selection.

"I was surprised he was taken," Kinnear said. "It's something we as an organization have to own up to. Montreal viewed Ching as an asset, and they were within their rights to do that."

Now, Houston is faced with the possibility of opening a new stadium next year without its icon. But just how much this will end up hurting the Dynamo is open to debate. Certainly it's a public relations nightmare, and while the Impact will no doubt try to extract a king's ransom from Houston, the likelihood of Montreal getting defender Andre Hainault seems very low. And the Dynamo could very well call Marsch's bluff and stick him with Ching's hefty salary, tendency for injury and declining production. Look for an 11th-hour deal involving a player not named Hainault and a draft pick to get Ching back.

The backlash against Kinnear continued Wednesday when the list of players eligible for next Monday's re-entry draft was released and it contained starting defender Bobby Boswell. In this case, however, the ire was misguided. The obvious question is: Why protect Boswell if he was going to be made available in the re-entry draft? The answer is simple. The move was merely a way of restructuring Boswell's contract. The final touches were applied Thursday, and resulted in him being removed from the re-entry draft.

"We've always wanted Boswell to return," Kinnear said. "His play with Geoff Cameron in the center of defense was a big part of our playoff run." 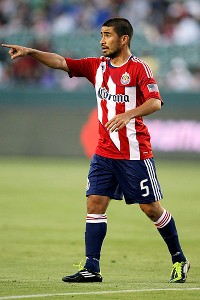 Kansas City reloads: It's been a busy offseason for Sporting Kansas City manager Peter Vermes. Out are midfielder/forward Ryan Smith, Arnaud and defender Seth Sinovic. Coming in are former Chivas USA midfielder Paulo Nagamura and, yes, Sinovic, who was initially lost in the expansion draft and then reacquired in the trade that sent Arnaud to Montreal.

Combined with the waiving of Jeferson, Milos Stojcev and Craig Rocastle, Vermes has recaptured over $500,000 in cap space plus the allocation money obtained from Montreal. Not a bad bit of work, considering that the core of the squad has remained intact.

"Not only did we get Seth back, but if you look at the true trade value itself we were able to get something for Davy," Vermes said. "That's the beauty of the expansion draft and the protected list. You should be protecting value, and if any of your guys are gone, you still have the ability to get some value for those [protected] guys. I do believe Seth was used a little bit as a pawn to get to Davy, and that's part of the business. I think it worked out the best for everyone."

The end result is that with the addition of Nagamura, Kansas City now has some depth in midfield to go along with Julio Cesar, Roger Espinoza and Graham Zusi.

"Julio Cesar isn't a spring chicken, but he has experience that's invaluable," Vermes said. "He understands his place in the team. Then you look at Roger and he has international duties. So to have a mix of guys like we do who have experience, I think is very good for us. It's probably harder to deal with from a management perspective, but I do think it's important to understand that we have so many games and so many events that players need to be available for. It's highly important to have a deep roster."

Jeff Carlisle covers MLS and the U.S. national team for ESPN.com. He is the author of "Soccer's Most Wanted II: The Top 10 Book of More Glorious Goals, Superb Saves and Fantastic Free-Kicks." He can be reached at eljefe1@yahoo.com.