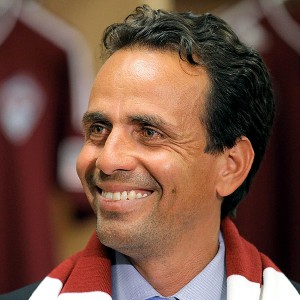 Doug Pensinger/Getty ImagesIt didn't take a leap of faith for the Colorado Rapids to hire former FC Dallas assistant Oscar Pareja, but it is a step into the unknown.

One thing the Colorado Rapids can't be accused of is hiring a retread to replace the fired Gary Smith as head coach.

The 2010 MLS Cup champions turned to former FC Dallas assistant Oscar Pareja on Thursday, spurning the likes of Denis Hamlett and Tom Soehn, both of whom have experience as MLS head coaches. Richie Williams, another former MLS manager, albeit as an interim replacement, was also passed over.

That's not say the Rapids are taking a leap of faith, but it is a step into the unknown. Pareja, 43, spent eight years in Dallas as a player, with the midfielder earning Best XI honors in 2001. He took on a role as an assistant coach in Dallas shortly after his retirement in 2005 and forged his reputation as a keen developer of young talent, running Dallas' youth academy while also managing the reserve side, with no fewer than six of the academy's graduates making it to the first team. Sandwiched between his time in Dallas was a stint as an assistant to Wilmer Cabrera with the U.S. U-17 national team.

Does Pareja have what it takes to make the jump from assistant to head coach? Those who crossed paths with the Colombian while he was in Dallas insist that he is. "The first thing you notice is Pareja is so positive and he's very encouraging to young players," said current New York Red Bulls midfielder Dax McCarty, who played under Pareja when the two were in Dallas. "His passion is nothing like I've ever seen.

"I think he'll be a player's coach. He's an easy guy to get along with and respect, but he's also not afraid to get on players. I can remember one time when I had pretty bad game and he just laid into me. I appreciated that because it was something I needed. He'll find that balance between being stern and being someone you're comfortable being around." 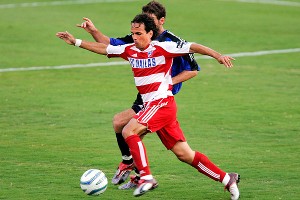 Brian Bahr/Getty ImagesPareja, 43, spent eight years in Dallas as a player, with the midfielder earning Best XI honors in 2001.

But if Smith's tenure proved anything, it's that being a head coach is about dealing with those above him as well as below. The friction between Smith and technical director Paul Bravo -- over what Smith perceived as meddling in the area of player recruitment -- proved to be the Englishman's undoing.

That doesn't figure to be a problem for Pareja since he and Bravo will no doubt be more invested in making this particular relationship work. A team firing the coach who won it an MLS Cup isn't unheard of -- Smith is the fourth manager to hold that dubious honor, joining Thomas Rongen, Sigi Schmid and Steve Sampson -- but it does place more pressure and accountability on the club's top decision-makers, namely Bravo and newly installed team president Tim Hinchey. That should give Pareja the requisite amount of time to put his stamp on things. And it would appear that part of the reason for hiring a relative unknown like Pareja is that he'll feel a certain loyalty to the higher ups for giving him his shot as a head coach, something that certainly can't be said about Smith, who joined the organization a year before Bravo. All of this should ease the level of dysfunction within the organization and increase the odds of Pareja succeeding.

"I think the chemistry is good, and I felt that since the first time we met," Pareja said about his relationship with Bravo and Hinchey. "I could understand what their intentions were. I like it. It's a philosophy that I've been working toward as a coach."

As for the team, Pareja inherits a side that tied for the sixth-highest point total in league last season and has some solid pieces to build around. In particular, the spine of the Rapids -- from defenders Drew Moor and Marvell Wynne and midfielders Pablo Mastroeni and Jeff Larentowicz all the way through forwards Omar Cummings and Conor Casey -- is impressive, although how Casey will bounce back from Achilles tendon surgery remains an open question. But the time it has taken Colorado to find a head coach -- Smith was let go back in early November 2011 -- means that the team has largely stood still in terms of its talent level while others sides have moved forward.

"We're going to try to be efficient with every move we do," Pareja said via telephone as he departed for the MLS combine that begins in Ft. Lauderdale, Fla., on Friday. "As far as style, I'm a possession-oriented coach who is passionate about the game and tries to get the players to reach their potential. I try to drive the team in that direction and try to create a good, attractive soccer for the fans.

"There's a great base of players for sure, players that I have no doubt are capable of executing what I want them to."

While there is certainly time to make additions, the team's track record has been to build almost exclusively with MLS veterans and through the draft. This likely leaves Pareja with the unenviable task of trying to squeeze more from the players that the team already has, which might not suit the slick-passing style he favors. In the ultracompetitive Western Conference, this puts Colorado among the fringe teams to make the postseason now that the playoff system has been tweaked to allow just the top five teams in each conference.

"If I said it was going to be overnight, I would be lying," Pareja said. "As much as I'm optimistic and confident about the ability of the players to make it happen and the way we do things, I think it is still going to be an ongoing process. We're going to work hard; that, we can control. The way and time that we invest in this project, we can control that, and for sure we are going to be very demanding with everybody because I want everybody to be on board and be convinced about the direction we are going."

Even if that direction is a step into uncharted territory.