Major League Soccer is making some serious headway based on the response to David Beckham's first title win with the L.A. Galaxy, which attracted coverage from all over the globe. But was it just the "Becks factor," or is the American league now a genuine high-profile product? 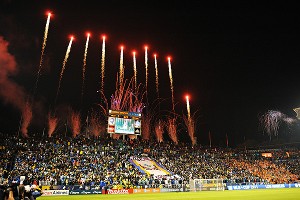 MLS attendance was up 7 percent this year and TV ratings improved, too. Average crowds of more than 17,800 would seem to indicate that if soccer is still a minority sport in the U.S., it's becoming a significant one. Average attendance was higher in MLS than in the NHL or the NBA -- you remember the NBA, don't you?

What did not help was the scheduling of the showpiece MLS Cup match against an attractive NFL game between the New York Giants and Philadelphia Eagles. It's important for the development of soccer in the U.S. that the big match gets its own window in future years.

The atmosphere created by a record Home Depot Center crowd was superb, and the decision by MLS bosses to stage future finals at the home of the highest-seeded finalist should ensure that continues. So we won't see repeats of last year's Colorado-Dallas final played thousands of miles away from both clubs in freezing Toronto.

Commissioner Don Garber talks of making MLS a major worldwide league within a decade, and craves international credibility. It is an ambitious plan and I, for one, hope that it happens. But where I take serious issue with Garber and his colleagues is in their decision to revert to an unbalanced fixture list next year.

A 19th team, the Montreal Impact, is entering the league. But is that really a reason to stop every team playing each other twice? Apparently so. MLS has put easing travel schedules and flying time ahead of an authentic competition. Instead, teams will play some rivals three times, and others only once depending on geography. That could mean, for example, that Real Salt Lake fans in the west might never get the chance to see New York's Thierry Henry.

While understanding that there are special problems in such a vast country, this is the wrong answer. It will do little to enhance the league's reputation abroad.

Having got that bee out of my bonnet, MLS deserves to succeed. It has been a long battle for recognition that is far from over.

But the quality and visibility is improving, and the league's future just might be exciting. Yes, Beckham may be leaving, but other major stars will surely be on their way soon.

Ian Darke is a commentator for ESPN. You can reach him on Twitter at http://twitter.com/iandarkeespn.

ESPN.com writer
Darke, who called games for the network during the 2010 FIFA World Cup in South Africa, is ESPN lead soccer voice in the United States. He has covered the Barclays Premier League and the Champions League since 1982, and has one of the world's most recognizable soccer voices.