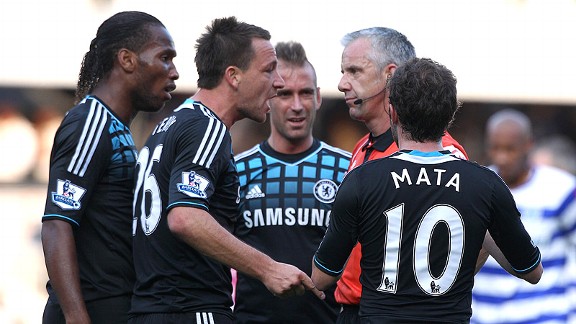 Press Association/AP ImagesThe pugnacious Chelsea mentality fostered by Jose Mourinho has been reignited by Andre Villas-Boas -- and on Saturday, the Gunners will be on the receiving end of it.

No team in the Prem is perfect -- not even Arsenal. Manchester City's spendthrift ways make Roman Abramovich look like a soup-kitchen oligarch, Stoke takes almost infantile glee in its skullduggery, and Liverpool has a sense of entitlement that belies its on-field performance. And have I ever mentioned that I'm not a big fan of Spurs? But above all others, lately it's Chelsea that really makes my mustache bristle.

Wasn't Jose Mourinho's much-fawned-upon protege Andre Villas-Boas supposed to transform the aging Blues into a team every bit as stout and breathtaking as those of the Special One's magical years? Certainly, AVB should be commended for re-energizing the midfield with his M&M boys (Juan Mata and Raul Meireles) and helping Fernando "Humpty Dumpty" Torres pick up the pieces of his shattered form.

And yet, watching his side whine and bully its way through 90 ugly minutes against Queens Park Rangers, winding up with nine men on the field before halftime, I couldn't help but notice that the only thing that's changed with the Blues are the names. That same arrogant backs-against-the-wall-so-let's-come-out-elbowing mentality fostered by their first Portuguese guru is still very much alive -- and kicking opponents.

And while AVB is still struggling to find the right mix of tactical intelligence and soccer pyrotechnics that once made the Blues so easy on the eye, that pugnacious Mourinho-esque streak has once again reared up. Led by captain John Terry -- a man of such increasingly dubious character that he thought the film "Despicable Me" was an unauthorized autobiography -- Chelsea now resides firmly at the bottom of the EPL Fair Play Table, the statistical "Naughty or Nice" list that is usually the domain of clubs with less world-class talent than a West London Prem contender. After all, 24 yellows and three reds in nine league games is something you'd expect to see in an average Serie A weekend, not at Stamford Bridge. 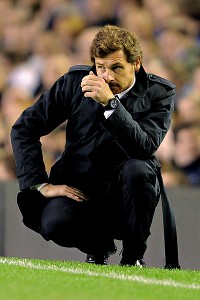 Villas-Boas might crow about Chelsea's ability to battle fiercely when short-handed as "strength of character and resolve," but I bet there is no shortage of referees suffering from carpal tunnel syndrome, what with the constant card brandishing at Blues matches.

But wait. Who's that only a spot or two above Chelsea in the bad-behavior rankings? Why, none other than its twinkle-toed, holier-than-thou neighbors from North London, Arsenal. How can this be, especially since Arsene Wenger has never witnessed one of his players make anything other than a clean, textbook tackle?

Given these two dirty dancers, the odds of Saturday's match ending with 22 players on the pitch are about as likely as Carlos Tevez having dinner chez Mancini.

I mean, Wayne Rooney's father must be salivating at the over/under on red cards at Sunday's meeting between these two rivals, not least because the Gunners have risen from the smoking rubble of their early-season implosion and now have a stage -- Stamford Bridge -- on which to prove they're more than just a scrappy little mid-table team that has somehow won seven of its past eight matches in all competitions, most of them hard-earned and courtesy of Robin "I'm one tackle away from a season-ending injury" van Persie. (I swear, if the Dutchman ever decides to do a Nasri and skip town, I'll hunt him down and place a clog where the tulips don't grow.)

Despite their unhealthy overreliance on RVP in attack and a backline with the pace of a three-toed sloth in heat, it is almost safe to say that the Gunners are starting to look like a team capable of challenging for fourth place without fear of being taken away by the men in the white coats with butterfly nets. Almost. But the Big Bad Blues present a formidable obstacle in the road to Arsenal's redemption. History tells us that when the Blues' hackles are raised, ugliness prevails. 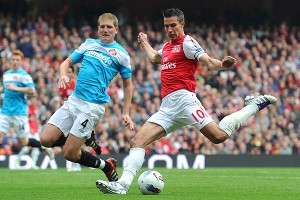 Is there a more indelible image in Chelsea's recent criminal past than the sight of Michael Ballack, wild-eyed and spittle-spraying, stalking referee Tom Henning Ovrebo up the field after a penalty appeal was turned down in the final minutes of the 2009 Champions League semifinal against Barca? On second thought, I can just as vividly conjure up Didier Drogba's live TV zen chant -- "It's a %$&^@# disgrace" -- after the final whistle from that same game. It didn't even matter that Chelsea's feelings of injustice had some merit -- Ovrebo turned down four penalties that night, at least two of which seemed legitimate. Yet so outrageous was the Blues' display of mob hysteria that I think the entire soccer planet, save a sliver of West London, celebrated when Roman's Euro dreams were snuffed out yet again.

Last Sunday, Chelsea ambled into Loftus Road to feast on crosstown roadkill QPR. As it all went horribly wrong, starting with Sideshow Luiz's demonstration of "Brazilian defending" in his own penalty area, the cauldron bubbled.

First, Jose Bosingwa was contentiously dismissed, before Drogba the Unhinged was sent off in the 41st minute for two-footing Adel Taarabt -- a challenge that braying QPR boss Neil Warnock deemed "worth three red cards." So brazenly obvious was the foul that even Villas-Boas couldn't whinge about it. At the final whistle, John "Friend of the Ferdinands" Terry charged down referee Chris Foy with a sprightliness he hasn't shown since he first hit on a best mate's girl as a young lad.

AVB added his spice to the soup by angrily confronting Foy in the tunnel -- "I was very aggressive," he later admitted -- before doing his anti-PSA for the "Respect the Ref" movement by accusing the referee of everything short of breaking up Demi Moore's marriage. The anti-referee screed was his third of the young season and moved him ahead of Sir Alex as the leading conspiracy theorist in the league. At the same time, it could be seen as an homage to his role model, Mourinho. Under the Special One, there were always dark, sinister forces lurking, plotting to deny Chelsea of its manifest destiny -- world domination.

What makes Chelsea's recidivist behavior all the more frustrating is that the Blues have the talent to rise above their knuckle-dragging instincts. No doubt part of it stems from the anvil-like pressure to keep pace with their Lighter Blues Brothers, the rampant ones from Manchester. With every David Luiz brain-freeze or shanked Torres sitter, Chelsea collars tighten to the point that AVB's cathartic, chest-pounding celebration after the 2-1 win over Everton makes complete sense. Being irrelevant gets painful -- just ask Lindsay Lohan -- so it's no wonder Terry and his Moaners have such trip-wire tempers on the field.

With Chelsea in full paranoia, and Arsenal able to field a close-to-first-choice team -- Thomas Vermaelen returns to anchor the defense after a two-month layoff -- I wouldn't want to be the man clutching a whistle in the middle of this maelstrom. This has all the makings of a 1-1 cardfest that ends with nine playing eight. Oh, who am I kidding? The Gunners never take a point at the Bridge.