Is Newcastle for real?

On May 24, 2009, the day Newcastle fell from Premier League grace for the first time in 16 years, I happened to be in England. Among the myriad images of shattered supporters that flashed across the TV screen that afternoon, one remains uncomfortably seared into my brain.

The photo is of two plus-sized gentlemen standing in the away end at Villa Park, arms around each other, belting out their anguish through streaming tears. (You can see them to the right here, and for a more disturbing image, go here and click to the seventh photo. If you're not eating, that is.) 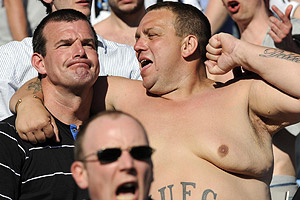 What makes that picture so indelible is that one of these future "Biggest Loser" contestants is bare-chested, sporting an "NUFC" tat on an enormous, sagging belly that looks as though his butt has been welded onto it.

Yet through it all -- a season that saw three managers go on gardening leave and a fourth, Alan Shearer, the last in a long line of Magpie Messiahs, unable to stem the bleeding -- the Toon Army stood defiant in a fashion one rarely sees outside the rugby All-Blacks' haka dance. Lest everyone think they had seen the last of Newcastle in the Prem for a geologic age, these fans would keep singing until they were lowered into their caskets or their beloved Magpies were back in the top flight.

Which is why I'm so delighted that a mere two years later, not only does Geordie Nation find itself firmly entrenched in the Prem but it is looking down on 17 other clubs in the table, including Chelsea, Liverpool, Tottenham and Arsenal.

Through 10 games in 2011-12, the Magpies are one of just two undefeated teams -- the other being the transcendent Sky Blues -- and are enjoying their best start to a season since 1994-95.

No one, least of all the Newcastle faithful, expects the joyride to last. With a kamikaze schedule looming over the next month, pitting the Tynesiders against Manchester United, Man City and Chelsea on consecutive match days, it's entirely likely that they will find themselves in the more natural mid-table resting place before the year is out. But for now, they're making life among the Top Seven -- yes, I'm expanding beyond the Top Four because the Gunners are close enough -- far less mundane and predictable, and for that alone they should be celebrated.

It doesn't seem to matter that Newcastle's preseason was nothing short of tumultuous, with fans storming the field at its first exhibition game in Darlington, three players not partaking in the U.S. tour because their past criminal records meant they were denied work visas and a nine-plane-rides-in-10-days schedule that would have impressed George Clooney's character from "Up In The Air." I bet, unlike Clooney, they flew coach too. 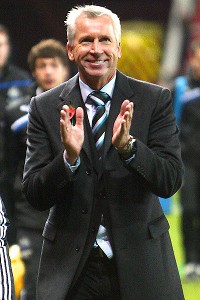 Ian Horrocks/Getty ImagesPardew the interruption, but the Newcastle manager has his side looking down at the likes of Liverpool, Chelsea and Arsenal in the table.

That said, all the uncertainty and fear has so far been erased by the zen master of Northern England, Alan Pardew, cast in the unlikely lead role that few hardcore Geordies thought he should be entrusted with. I've always found "Pards" to be an arrogant, self-satisfied poseur, what with his xenophobic sparring with Arsene Wenger over fielding predominantly foreign teams (funny now looking at his heavily Frenchified Magpies) or his use of the word "rape" to describe a Michael Essien tackle, but you've got to give the former West Ham/Charlton/Southampton manager his due. After all, he has taken a rudderless, entitled squad and transformed it into an assured, smooth-passing, difficult-to-break-down side. (Newcastle has conceded a league-leading seven goals.) He has done this by crossing the English Channel and recruiting a bunch of relatively unknown players from "lesser leagues" (read French) at sensible salaries. Along the way, he jettisoned high-priced rabble-rousing local heroes Kevin Nolan, Andy Carroll and Joey "Hashtag" Barton and forged a fierce team unity that manifests itself on the field and in the locker room.

Many would point to the porcine Ashley as the man single-handedly responsible for turning the apostles of St James' Park into Tyneside apostates. Not for nothing did the Guardian newspaper label him a "disgrace to football" after his Abramovich-like dumping of sainted manager Chris Hughton with nary an explanation. In addition to defenestrating the man who had hauled a shattered Newcastle back into the Prem at the end of the 2009-10 season, he sold off the naming rights to their hallowed stadium (built in 1892) to a sports retailer in about the time it took him to down a pint of Newcastle Brown Ale.

His lack of social graces notwithstanding, there's no denying Ashley's economic commitment, as the apparel king has poured more than $450 million into the squad since taking over from Sir John Hall and Freddy Shepherd, who wasted plenty of their own money on high-priced washouts. Until now, Ashley has had little to show for his investment other than last month's launch of Newcastle-branded lingerie, which fortunately he chose others to model. 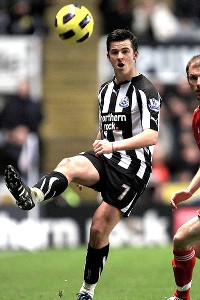 Mark Thompson/Getty ImagesJoey Barton tweeted himself out of Newcastle before the summer transfer window closed.

While ignoring his own waistline's cry for mercy, Ashley tightened Newcastle's financial belt, putting an end to the massive debts the club accumulated under previous regimes by hurling money at such Euro "stars" as Xisco, Geremi, Luque and a host of others that sound like a gaggle of one-named philosophers.

Instead, thanks to the club's astute scouting network, Ashley and Pardew went trolling in France for players who wouldn't act as if they were doing Newcastle a favor by deigning to call St James' Park home. Layered atop these shrewd maneuvers was "The Andy Carroll Special," a business model based on hornswoggling a desperate club into paying stupid money for a player with three England caps and 11 Premier League goals on his CV.

Ashley has dubbed the blueprint of buying raw, young talent and selling it along as his "Arsenal-on-Tyne" project. He certainly has both sides of that equation down nicely -- tidy profits on player transactions combined with zero trophies.

Cheick "The Next Michael Essien" Tiote and Yohan "A Less Dreamy Robert Pires" Cabaye may be household names only in homes where French is the primary language, but combined they cost Newcastle about one-fifth of what Liverpool paid for Carroll. With star striker and former West Ham reject Demba Ba (eight goals in nine league games), they have restored more than a measure of pride on Tyneside.

Last season, when Newcastle came storming back from a mere four goals down against a certain team from North London, I was at my beer hole of choice, watching utterly slack-jawed as Arsenal fell apart. At the end of my 45 minutes of hell-on-earth, a lanky lad in a Newcastle shirt to my left yelped, "It doesn't get any better than this, mate."

I wonder what he's saying today?