Fragile egos crossing at the Bridge

After an international break during which the Republic of Ireland qualified for its first major tournament since Sinead O'Connor was considered relevant, England beat Spain and Sweden in meaningless friendlies that surely cemented its place as the team to beat at Euro 2012 and the United States finally scored more than one goal for the first time in the "baby steps" Klinsmann era, I suppose just about anything is possible. 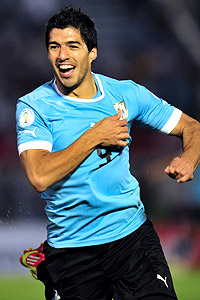 Martin Bernetti/AFP/Getty ImagesLuis Suarez returns from the international break having scored four goals against Chile, but with an FA charge hanging over his head.

So perhaps even Liverpool and Chelsea can find the Zen-like state that only three EPL points provides. There isn't a psychotherapist's couch large enough to fit the Chelsea and Liverpool squads heading into their who-will-go-off-the-deep-end-first game on Sunday. After all, you're looking at two sides carting around so much psychic baggage that even Southwest Airlines would charge them a fee.

This angst-fest at the Bridge is soap-opera rich in storylines. Perhaps the most volatile subplot involves those twin alleged racists, John Terry and Luis Suarez, each vying to be the next head speech writer for Sepp Blatter, a man for whom toxic, prejudicial slurs are forgotten with a postgame handshake. It's a tough call for the FIFA boss, deciding which pillar of rectitude to align himself with -- the chest-puffing, badge-kissing, girlfriend-of-best-mate-shagging captain of England or the shoulder-biting, Hand-of-God wielding, forever-playacting Uruguayan striker. Based on their respective performances this past week -- JT sitting out the Spain game and Suarez scoring four goals against Chile -- I'd give the impish Liverpool scamp the edge.

Suarez, however, can expect to have his every touch and dive jeered by the Chelsea faithful, who conveniently forget that Stamford Bridge has morphed into a glass house recently. As far as Blues supporters are concerned, Terry is still, as one fan put it so cluelessly on a sign he held up at the previous home game, "John Terry: Leader, Lion, Legend."

The FA will soon decide whether another word beginning with R should be added to the placard.

Which is why I'd be surprised if Chelsea's captain utters a single word on the field Sunday other than "heads" or "tails."

Then there's the game within the game featuring the embattled managerial messiahs, Andre Villas-Boas and Kenny Dalglish. Chelsea's 34-year-old manager, charged with orchestrating a long-overdue reinvention of the side, is under fire for "improper conduct," which has nothing to do with his lying to the media when he said David Luiz was a defender. And in the other dugout, King Kenny has seen his crown wobble ever so slightly in recent weeks, coinciding with his Sir Alex-worthy hair-dryer blasts at unsuspecting referees and bespectacled schedule-makers, not to mention his team's recent inability to muster a goal against Prem rookie Swansea. Put bluntly, Dalglish's record since descending from the Anfield heavens in January is just a handful of points better than Roy Hodgson managed, and Dalglish is spending nearly $100 million more than his predecessor. 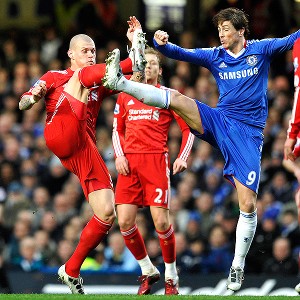 Glyn Kirk/AFP/Getty ImagesIn his Chelsea debut in February, Fernando Torres impressed for his Rockettes impersonation but failed to score against his former club.

Further disturbing Dalglish's equilibrium is the "disgraceful" schedule that, thanks to league and TV powers, will force Liverpool to play a Sunday-Tuesday might-as-well-be-doubleheader. Oh, and by the way, those games are against Manchester City on Nov. 27 in the Premier League and against Chelsea in the Carling Cup. With Stewart Downing continuing to get assists for England but not a single one for LFC, and Suarez seemingly reserving his lethal finishing for Uruguay -- how else do you explain him needing 51 shots to score four goals in the league? -- you can understand why the Kop's nerves are jangling like Red Sox Nation's were the entire month of September.

And to make matters worse, the Reds have to face Chelsea without their Phil Collins-loving talisman Stevie G, who is sidelined yet again. You'd have thought all Liverpool's spending on midfielders would have made Gerrard no longer vital to the team's needs, but judging by how well he played against United, it's obvious that he's still more of a force at 31 than Charlie Adam, Jordan Henderson and Downing combined. And much cheaper, too.

Meanwhile, Roman Abramovich's ruble counters can't be happy, either. Let's see: $21 million to buy out Villas-Boas' contract from FC Porto, compounded with a tidy $7 million salary for each of the next three years. Another $65 million, or so, in summer transfer fees for influential midfielders Raul Meireles and Juan Mata, but also for a grab bag of players like teenaged Belgian striker Romelu Lukaku, Barcelona product Oriol Romeu and Genk keeper Thibaut Courtois, who was loaned out before the ink even dried on his Blues contract. The return on investment? Fourth place, nine points off City's scorching pace, nearly a third of the season behind them, dispiriting defeats at the hands of Manchester United -- who can forget El Nino's El Shanko? -- and Arsenal, who dropped five on the Blues with such preposterous ease that you'd be stunned to learn it was the first time any team had done so at Stamford Bridge since 1989. (Bonus points to anyone who remembers the team that did it. Hint: Dalglish was in charge.)

Given that AVB works for a guy for whom the term "severance package" is always on the tip of the tongue, it comes as no surprise to hear that Abramovich's comrade, the peripatetic managerial vulture Guus Hiddink (Netherlands to South Korea to Russia to England, where in his brief 21-game tenure in 2009 he guided Chelsea to a third-place finish and the FA Cup), is circling the Stamford Bridge roost after having been fired from his latest gig with Turkey. What's the over/under on the wily Dutchman filling the lucrative position of chief Abramovich spy -- or as it's listed in the club's org chart, Chelsea's Director of Football -- in the new year?

After all, for the first time in recent memory, the struggles within Chelsea aren't necessarily fixable with more money. Terry's mouth (and legal defense team) now moves much faster than his legs. Last year's late-season revelation, Sideshow Luiz, has gone from much-adored to bench adornment thanks to his penchant for forgetting he's a center back, not a center forward. Once-dominant keeper Petr Cech has regressed to his jittery 2008 Euro form. Frank Lampard's lost a step, Cashley Cole two and even Torres' mane is starting to lose its luster.

In fact, the Chelsea astrological chart is in such descendancy that a 12-year-old Swindon Town starlet recently expressed no interest in joining the Blues' academy. And why would he when he's merely a year away from starting for Arsenal?

And speaking of my Gunners -- something I'm contractually obliged to do in every column -- would anyone a month ago have predicted that Liverpool, fresh off a 2-0 win in the Merseyside derby, would be level in the standings with this Arsenal team? Certainly not King Kenny, who's juggling the Reds' return-to-top-four expectations with those of John Henry and FSG, a group not exactly inured to the kind of defeat that brought the Red Sox season to a humiliating end in October. In the weeks since, the Reds have thrown away more points than the NBA owners.

And as you think of the term "locked out," your brain naturally turns to the two so-epically-underachieving-it-beggars-the-imagination strikers we now affectionately refer to as Fernandy Carroll. Their impotence is, by this point, well-documented: Torres scores once every 10 shots for Chelsea compared to once per every 4.5 shots when he still wore Anfield red, whereas Carroll times his strikes around various lunar or solar eclipses. Sunday would not be a good day for either player to languish in that confidence-destroying mire of missed sitters, desperate as both sides are for a win. But imagine how excited I will be to see them both on the same field. Double the underachieving fun!

Given that psychotropic drugs are frowned upon by the FA, both of these teams will have to roll their fragile psyches into Stamford Bridge with only their competitive pride to inspire them. My prediction? Whoever scores first will stagger off with this one, while the losers will ride home in various states of catatonia.