Before making sweeping predictions about the Prem season -- Wigan will be worm food by Christmas; Spurs are destined to slip and fall into the lava-filled abyss of the Europa League; Robin van Persie will bang in 50 league goals before April -- we are reminded that there are still 26 games to go, and that anything can still happen (besides John Terry's salvation, that is). However, premature or not, I'd be shocked if Manchester City doesn't run the table and become the first team since -- I can barely type the words without misting up -- Arsenal's 2003-04 Invincibles to finish the season undefeated.

Certainly, there was a depressing inevitability in the way City rolled 3-1 over previously unbeaten Newcastle. No matter the strategy deployed to muzzle and neutralize David Silva and Sergio Aguero, the Sky Blues appear capable of hitting a sixth gear and hurtling past opponents. Or, as their fans chorused after their second goal in a four-minute blitzkrieg Saturday: "We are City. We score when we want."

The embodiment of that brash, we-do-as-we-please mentality is, of course, Mario Balotelli, whose wonderfully nonchalant penalty kick was followed by both the most polite and most chilling celebration in the history of the Prem. Having sent Newcastle keeper, Tim Krul, sprawling in the wrong direction with a stutter-step in his run-up, he slotted the ball home and then folded his arms across his chest, as if to say "This is why always me."

So for all the satisfaction that Manchester United, Liverpool and Arsenal fans may have felt after their clubs' hard-earned victories this weekend, they have to know that, along with Chelsea and Spurs supporters, their teams are competing for the remaining three Champions League places.

That said, if the spirit shown by the Reds in the match of the weekend is any indication as to what lays ahead, it promises to be a pretty ferocious scrap.

There are few greater pleasures in life than the sight of Terry with his face in the dirt, an image we were treated to about three weeks ago when the Chelsea captain fell over chasing Van Persie on what proved to be the decisive goal in Arsenal's 5-3 curb-stomping at the Bridge. So for the soccer gods to provide a second gift of Terry comedy gold so soon after their initial offering must either be evidence of their perverse sense of humor, or some monstrous form of karmic resolution for the multitude of his sins. 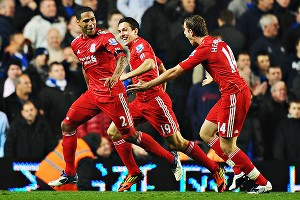 Mike Hewitt/Getty ImagesLiverpool's victory over Chelsea left both teams level on points -- and 12 behind Manchester City.

This time it was Liverpool's Glen Johnson, the once-forgotten, toilet-seat-stealing right back, whose left-footed curler inside the far post caught JT lunging the wrong way on the line and ending up on his lionhearted ass. Oh, and once again, it was the winning goal, which made Terry's despair that much more exquisitely wrenching and my schadenfreude index go through the roof.

Obviously, a more rational pundit would tell you that it is far too early in the season to bid adieu to the Blues' or anyone's hopes -- except maybe Roberto Martinez's -- but sanity is for the small-minded. This kind of wobbly Chelsea form can't be good for Roman Abramovich's peace of mind and, by extension, manager Andre Villas-Boas' job security.

Which can only mean one thing: Guus Hiddink, please pick up the blue courtesy phone.

I wouldn't put it past everybody's favorite Russian oligarch to be the source of all those breathless Hiddink-to-replace-or-unsettle-Villas-Boas tabloid stories, if for no other reason than to send a message to the 34-year-old former wunderkind. Abramovich didn't spend close to $100 million of his cash this summer to launch the AVB Sputnik only to watch his Blues lose back-to-back home games for the first time since 2002.

As far as AVB's first 12 Prem games go, the numbers will make Abramovich's eyes bulge like his bank account. The young Portuguese manager has squeezed out a whopping 22 points, the lowest in the recent Roman epoch. Lower than Carlo Ancelotti (30 points), Jose Mourinho (29 points), Big Phil Scolari (29 points), and most astonishingly, even worse than Uncle Avram (24 points).

Yet all the talk of Abramovich's famously itchy trigger finger partially obscures the other half of the equation, for as one club sinks, another must rise (not Riise -- still too fresh a wound for the Kop faithful). In spite of the topsy-turvy start to its season, Liverpool ground out yet another tough win against an elite club. The Reds' total points haul against Spurs, Arsenal, City, United and Chelsea since Dalglish took over improves to 17 points from 27.

If only, as their boisterous fans moan incessantly -- I was surrounded by a rabble of red jerseys at my local pub Sunday -- they could play with this kind of panache against teams at the other end of the table.

Since not even the Liverpool fans packed into the bar could understand a word of what King Kenny, in his hybrid Scottish/Scouser accent, said during his postgame interview, we were left to speculate what led to the Reds' most determined and impressive performance of the season. True, there haven't been that many recent dazzling displays, with three draws in their past four league games, each one like an iceberg about to wreck the HMS Dalglish, which has also been weighed down with the Luis Suarez Incident and the increasingly irksome second-guessing of the King's transfer buys.

But you can never underestimate KK's juju, particularly against Chelsea: now at a career 12-game unbeaten managerial streak (nine wins, three draws), and three LFC victories in a row for the first time in 21 years.

It may be time to rebrand Stamford Bridge. I'm sure Newcastle's Mike Ashley can come up with something clever. How about Anfield South?

And, of the several players like Fernando Torres and Raul Meireles who had extra incentive Sunday to stick it to their former employers, what were the odds that it would be the much-derided England right-back Johnson who stole the show with his surging 30-yard goal-scoring run in the 87th minute. Like all things Scouse, the win was far from perfect. The crippling first-half tempo of the Reds' high-pressure, high-speed harassment of Chelsea in the first half couldn't be maintained for 90 minutes, as evidenced by the Blues' overwhelming second-half dominance once Daniel Sturridge replaced the hapless John Obi Mikel. It was the Nigerian who in the 33rd minute had allowed Charlie Adam to crunch the ball off his foot after being put under pressure from an Almunia-esque throw from Petr Cech, whose new Hannibal Lecter-worthy face-mask has made his recent performances appear as unhinged as the cinematic sociopath he resembles.

A slick one-touch exchange between Suarez and Craig Bellamy at the top of the box ended with Maxi Rodriguez, enjoying his first start of the season, lashing in his first Prem goal in 2011-12.

It was then left to Spain's third-string keeper Pepe Reina to execute a full-stretch, game-saving parry of a glancing Branislav Ivanovic header, and thus setting the stage for Johnson to meg the declining-laughingstock-formerly-known-as-Ashley Cole and give Dalglish give an excuse to launch into a little Scottish jig along the touchline.

Though he's still under pressure from New England Sports Ventures to get Liverpool back into Europe, it's clear the Anfield king isn't in danger of getting a pink slip any time soon. But bookies have been giddily slashing the odds -- from 33-1 before kickoff to 10-1 post-defeat -- on mini-Mourinho becoming the first Prem boss to go on gardening leave. We know Abramovich's fortune, much like his stewardship of Chelsea, was built through opportunistic speed and ruthless alpha-male ambition, which means that AVB needs to start winning ASAP unless he wishes to join the renowned managers who failed to meet Roman's demands for world domination and ended up in a well-paid scrap heap outside Stamford Bridge. 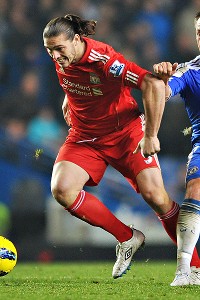 I'm no cultural anthropologist, but even a casual observer of human nature can learn a lot from the manner in which Andy Carroll and Torres were deployed in Sunday's must-win showdown. Despite costing more than $130 million, the pair -- scorers of a Ballon D'cardboard-worthy seven combined goals in 41 Prem starts with their new clubs -- were granted only eight minutes of cameos at the end of Liverpool's 3-1 win at the Bridge on Sunday.

These two may be the most expensive flops since "Spider-Man: Turn off the Dark."

Carroll's touches (five in three minutes) in particular had the leaden qualities of a hippopotamus attempting the fox-trot, while his Spanish counterpart could only make sure his hair was camera-ready as Sturridge (transfer fee: 1/13th of Torres) got the nod as a halftime substitute over El Nino even though Villas-Boas has steadfastly defended the struggling striker all season. When Torres did finally enter the fray, he managed little more than a handball inside the Liverpool penalty area and some plaintive looks at the heavens.

For Carroll, it may be that he just doesn't fit Liverpool's pass-and-move system. But Torres' problems appear to be more grave. He's in the right system, especially with his Spanish compatriot Juan Mata looking to service him, so maybe he's just not good enough anymore. That said, I'd swap him for Gervinho in a heartbeat.