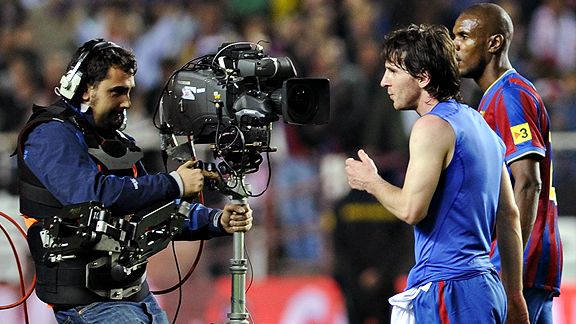 Cristina Quicler/Getty ImagesA proposed strike by Spanish clubs over issues involved in a future TV deal seems to have been averted, meaning television crews will have a regular schedule of matches to film this weekend.

Wednesday morning's ruling by Spanish judge Purificacion Pujol states that La Liga is not legally able to call a strike this weekend, so a round of fixtures that were apparently set to be wiped out -- which would have pushed the season at least into mid-June -- can now go ahead.

The decision relates to a dispute about whether the Spanish League (LFP) is obliged to continue providing one match each Saturday night that can be viewed on free-to-air (that is, non-subscription) channels in Spain. A new television deal for Spanish soccer starts in 2015, and the country's professional clubs view it as a lifeline for their utterly desperate financial plight, which -- according to conservative estimates -- is around 4 billion euros of debt spread across the top leagues.

Spain's professional clubs currently share 650 million euros per year from television income with individual, rather than collective, bargaining. Real Madrid and Barcelona have the biggest share with a descending order of priority via the next group of senior La Liga sides and then on downward through the clubs that bob up and down between the Segunda and Primera divisions.

Those clubs who voted for the strike were opposed by the G6 -- Villarreal, Espanyol, Real Sociedad, Sevilla, Athletic and Zaragoza -- which have varied motives but didn't believe that the embarrassment and inconvenience of industrial action at this stage of the La Liga season would be in the best interests of the debate.

What remains patently clear is that Spain's fans largely want the "free" game on Saturday night to remain; that government officials know removing the "free" game (which is enshrined in law) would be a vote-loser; and that those clubs that are massively in debt were clutching at straws if they thought that a strike, a victory in the argument and then slightly more money in their new TV deal in four years' time would be a solution to their problems.

Spanish professional football is -- and has been for years -- guilty of living far beyond its means. False accounting, tax mismanagement, constant vanity signings to help club presidents win elections or maintain power, inflated salaries, a willingness to constantly ask players to perform without meeting salary obligations -- these are all commonplace, and have become ruinous.

Whether Week 30 of the season goes ahead on schedule was always going to be largely irrelevant. Spanish football is utterly indebted to friendly banks and local councils, all of which are within one bad financial week of ruin. They are being artificially propped up, and damaging popular support from their fans by gaining a few million euros more to throw into the black hole of debt rather than adopting tighter accounting controls seems laughable. Cultural change is needed, not simply more money to fuel the madness.

My mind turns to guys such as Hercules' Royston Drenthe and the players of Levante a couple of seasons ago, who went for almost two years without earning a salary and lost homes, cars and significant sums of money thanks to their club's money woes. When Drenthe withdrew his labor because he wasn't being paid by Hercules -- not because he wanted more money -- he was roundly condemned in Spain.

I thought it was hypocritical nonsense and said so at the time.

Now, many of Spain's clubs want an even bigger share of television money, which the fans effectively have to pay for via subscriptions plus the loss of a free-to-air match. And they were willing to damage the fans' enjoyment of this scintillating season by going on strike to attain it, despite the graver truth that they must adopt a more healthy financial outlook or more Spanish clubs will go to the wall.

Hypocrites I brand them, and I wish them frustration and failure in their current aims.

The intensity and bitterness of the fight for the Spanish league and cup double between Real Madrid and Barcelona has had the unfortunate effect of diminishing focus on the cut-throat battle between Villarreal and Valencia for the other two top spots to secure European competition for next season.

The story surrounding the fight for third place encompasses various aspects ranging from local rivalry, financial peril, jealousy and deeply differing football philosophies. But two things above all factors add spice to the duel as the sides sit tied on 54 points with only the third-place finisher guaranteed entry to the Champions League group stage. 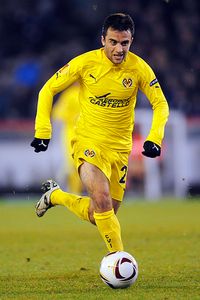 John Thys/AFP/Getty ImagesNew Jersey native Giuseppe Rossi has helped lead Villarreal up the La Liga table and into a battle with Valencia for an automatic qualifying place in the Champions League group stage.

One is Villarreal owner Fernando Roig, who was born in Valencia and was once a major shareholder with that city's dominant club but had his attempt to take over rebuffed. Just as Roman Abramovich initially tried to buy one London club (Tottenham) then followed rejection by making Chelsea hugely rich and successful, Roig took his frustration to the next-door outfit, Villarreal, which was then training on a public park before he helped guide the side into a talented, dynamic group that became glorious to watch.

Though Valencia also found success -- with a couple of wonderful La Liga titles, the UEFA Cup and two Spanish Cups -- they then lost their way, badly. Almost from the moment Rafa Benitez left to join Liverpool, the club made far more poor signings than it did successful ones, and repeatedly paid far above market value for players who were often then sold on at a huge loss.

Wages spiraled, and when the economic crisis torpedoed the sale of the Mestalla midway through the construction of an entirely new and viciously expensive stadium, Valencia was left with a debt that was well over 775 million dollars.

Thanks to the return to power of Manuel Llorente, whose previous successful spell at the club came courtesy of Roig's brother, Paco, in the early 1990s, Valencia has cut approximately $212 million from its debt and reduced losses. But the sum raised by selling David Villa and David Silva, just short of $100 million, was extraordinary, and at the time Llorente promised not to allow this devastating impact on the squad to turn into an annual event.

The fact that Unai Emery took Valencia out of the Champions League group stage should have earned Los Che around $35 million, but given the shattering enormity of their debt, the brutal repayment costs and the fact that Valencia needed to have its bank debt guaranteed by the city council, its doomsday scenario would be not qualifying for next season's Champions League and missing out on the money it brings.

After all, third place in La Liga guarantees a group slot, fourth place means a playoff berth and -- as Sevilla found this season -- the prospect of drawing a shock team like Braga that tips you out. If Valencia did miss out, it's likely that other clubs would then come in and find themselves able to push through the purchase of key Valencia players. A club can only stand so much asset-stripping before it stops being competitive.

Which is where Villarreal comes in: a side gaining respect among the European elite that would surely benefit even more from Champions League competition and the additional dollars.

Spain uses a "head-to-head" system in the case of teams finishing on equal points and, right now, Valencia has an advantage thanks to the 1-1 draw at El Madrigal in November. But Villarreal does have a 4-2 cup win attained in dramatic comeback fashion, largely inspired by New Jersey-born Giuseppe Rossi.

The clubs meet again in league play in ten days' time, at Valencia's crumbling old Mestalla stadium, in a match that has "golden" importance to the winner. To lead the head-to-head, Villarreal must either win at the Mestalla or gain a scoring draw that is better than 1-1. The Yellow Submarine must play Barca on Saturday then host FC Twente in the Europa League on April 7 before the all-important, volatile clash at Valencia three days later. That's some preparation!

I well recall the UEFA Cup semifinal of 2004 when Valencia's 1-0 home win over Villarreal put it in the final and kept the hated "upstarts" out. Nearly 50,000 fans crowded the Avenida Suecia outside the Mestalla, jumped on top of cars, chanted about sinking the Yellow Submarine and celebrated with extra fervor because of who they had beaten.

This game shapes up as a monumental battle of equally huge importance. The season has long enough left to run for damage to be repaired, but that head-to-head record looms as potentially decisive. For Villarreal, too, the wealth benefit of guaranteed Champions League football -- without the worry of going out in the qualifying round in August -- would be huge.

However, they are not nursing a $550 million debt, they don't have a record of four defeats in their past five outings and they remain fighting, gloriously, for a place in the Europa League semifinals.

Valencia's backs are against the wall. Can they come out fighting? Don't miss it for any reason.