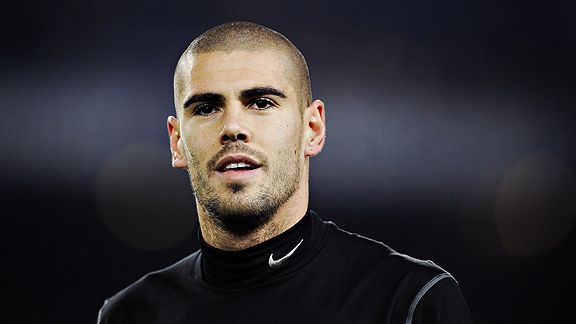 David Ramos/Getty ImagesValdez continues to rescue his team and help it win trophies, so why is he so underrated?

Should Barcelona's remarkable win at Villarreal this past weekend prove to have sealed victory in the La Liga title chase, there's not a guy on the planet who'll be more pleased that Gerard Pique gets all the headlines than Barca keeper Victor Valdes.

The big defender used to be a regular 25 goal per season man in the Barcelona youth system. Cesc Fabregas would take the corners and Pique, already taller than everyone else in the league, would pop in header after header. "He would also go forward on these super-confident runs out of defense and crack the ball home from distance," said Fabregas. "Our coach would always shout, 'Look out! Geri's got his rucksack on his back and he's setting off on another excursion.'"

And Pique's confidence in front of goal was shown Saturday with that top-class chest control and half volley for what many consider the league-winning strike at the Madrigal.

After his shot, Pique ran toward the crowd with what some want to interpret as his "Shakira celebration" -- hands crossed, two fingers fluttering in each direction like a bird's wings -- in homage to his girlfriend. Others will attribute the gesture as having been for Barca's Eric Abidal, recovering from a tumor operation and unable to use the No. 22 jersey, hence the use of two fingers on each hand.

But as philosopher Marshall McLuhan would have pointed out, the medium is the message. Pique is a showman. Funny, noisy around the dressing room, a practical joker, he is a born leader who is quite undaunted at hooking up with a world star like Shakira. While other players might get caught up in a media whirlwind and become distracted, Pique is quite happy in his skin.

However, the real hero of Saturday's match was Valdes. But, as usual, he'll go forgotten by the majority and underestimated by too many.

His saves on Giuseppe Rossi in the first half were both top class, products of the Pep Guardiola ethos that Barca keepers must play like a sweeper ready to come far out of their comfort zone, right off the goal line and sometimes outside the penalty box. Valdes has become a brilliant reader of a breakaway situation and, in my view, is the best one-on-one keeper in the game.

Perhaps Valdes bettered those two saves with his anticipation when Santi Cazorla had a shot at point-blank range. It should have been Villarreal's equalizer, but there was the Catalan blocking a ball that Cazorla would put in the back of the net 99 times out of 100.

There is, however, a shocking truth about Valdes. Not that he yearns to be allowed to ride a Harley-Davidson (forbidden in his contract) or go para-gliding and wind-sailing at Gava beach south of Barcelona. He admits those things will have to wait until he retires. And it has nothing to do with the fact that his favorite film is "Antwone Fisher," a tale of victory against oppression, abuse, misunderstanding and being unappreciated.

The shocking truth is that Valdes is one of those "Marmite" players, as they are called in the U.K. Like the pungent, black yeast spread, people seem either to love Valdes or loath him.

So many people underrate Valdes that I'd like to put a bounty on them, corral them together and sentence them to 12 months of sitting in front of a jumbo screen and watching save after save from this massively brave, athletic and increasingly sophisticated goalkeeper. Valdes owns two Champions League winner's medals with a goals-against record of only two in 540 minutes in the crucial last six matches in those tournaments (four semifinals and two finals).

Ask Thierry Henry or Cristiano Ronaldo about Valdes. The 29-year-old produced five crucial saves against the two players in the finals of 2006 (Barcelona 2, Arsenal 1) and 2009 (Barcelona 2, Manchester United 0).

Valdes is a big-match player. Not only has he won 14 major medals, he has three times lifted the Zamora award for the La Liga keeper who has conceded the fewest goals per game. Despite being the last man on the team that just keeps on flooding forward, and sometimes plays only two at the back, Valdes is also the stingiest keeper in Spain when it comes to letting the ball get past him.

That's one hell of an achievement.

But put Valdes' name out there on Twitter, argue that he's in the top three, perhaps top two in the world, and there is this hardcore of anti-Victors who snarl about him as if this were personal.

But, like me, the Barcelona squad thinks the world of him. Time and again the players will name him as the most underrated in Guardiola's galaxy. He rescues them points, wins them trophies, saves reputations and amazes with his ability to read the precise moment to sprint out and pull off a fearless block like the one where he robbed the ball at Rossi's feet Saturday.

Then there is his reputation (false again) of being difficult. Before the World Cup, I lost count of the ill-advised speculation from people who don't know him that he might be a poor third-choice keeper for Spain because he is "moody" and doesn't get on with Pepe Reina. Both claims were proved to be groundless. In South Africa, the two men publicly addressed the idea that they don't like each other, mocked it, proved the truth of their words with brilliant joint support of Iker Casillas. After Spain won the tournament, they said that the rumors about them not getting along actually brought the pair closer together as friends and international teammates.

So what's next for Valdes? More trophies, most likely. With its win at Villarreal, Barcelona has taken another step toward winning the treble. There are still plenty of challenges to overcome, of course, including the fact that the team is rife with injuries. Think Guardiola will need a hero or two, beyond Lionel Messi, who will step out of the shadow into the inferno of the next four or five weeks?

Over to you, Victor. Prove me right and the doubters wrong.

Jose loses his home record, but for how long will Madrid be his home?

For the Special One, no defeat in a match or in an argument is particularly palatable. But losing what felt like a century-long unbeaten record in home matches (150 games, to be exact) in the manner he did when Madrid was defeated 1-0 at the Bernabeu against Sporting Gijon must have felt absolutely appalling.

But he has himself to blame. His initial team selection was wrong. Both Ronaldo and Marcelo were fit to play but were protected for this week's Champions League match against Spurs. The gamble failed over the weekend but they paid him back on Tuesday.

However, the mood at the Bernabeu is to try to retain him at all costs -- something which will be massively increased after the 4-0 humiliation of Spurs ahead of what looks like an epic Spanish Cup final on April 20 against Barcelona.

Madrid president Florentino Perez doesn't know squat about football, in my opinion, but he does know the following. Mourinho has at least one firm offer, Chelsea, and would receive more if he made himself available publicly. The Special One has always maintained that his best work appears in year two at a club. Mourinho has palpably improved the training, the fitness and the competitiveness of this Madrid squad in his first season at the Bernabeu, and there are two trophies -- the Copa del Rey and European Cup -- still up for grabs.

So the last meeting between coach and president concluded with institutional support for the way Mourinho wants the football side of the club to be run. The Special One was told that he'd be able to handpick new players for next season and operate without interference from his nemesis, general manager Jorge Valdano, even though Mourinho would prefer that Valdano be removed from the club entirely.

If Perez has told his coach the truth, the ball is back in Mourinho's court. If he can win one of the two Cup competitions, which would be Madrid's first European Cup in nearly 10 years and its first Copa del Rey in an incredible 18, then Mourinho's word will be law.

Even if Madrid's finish to the season is merely respectable and Barca win all three trophies, Mourinho will be welcome to stay.

However, any more horror shows like the one against Sporting, particularly the manner of defeat rather than the actual result, and the Special One will no longer be seen as all that special, and Valdano could seize the opportunity to try to push Mourinho out the back door of the Santiago Bernabeu.

It's been a remarkable few weeks at Deportivo La Coruna where the fans, despite the impoverished nature of the squad and the sterile, inspiration-free performances, have rallied behind the players and the coach and roared them towards safety instead of relegation -- which could easily turn into a permanent slip down the ladder of Spanish football.

And so the club's supporters were rewarded Sunday in La Coruna with a little football miracle. The Spanish Zinedine Zidane roared again and those of us who adore him just watched with big grins. 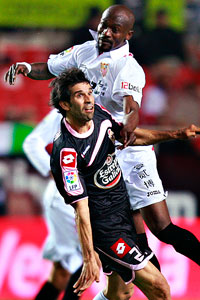 Losing at home to Mallorca, La Liga's most defensive coach, Miguel Angel Lotina, ripped up his playbook. He left top scorer Adrian on the bench and threw on the soon-to-be 36-year-old Juan Carlos Valeron who had only one start and 445 minutes of football under his belt this season after what seems like a lifetime of struggling with knee and ligament injuries.

Valeron not only had his day, he made mine.

The ball belonged to him. His unbelievable goal-assist pass to Xisco was either heat-seeking or remote controlled because the Canary Islander with the impossibly squeaky voice didn't betray his intentions by looking in the direction of his striker. As Valeron told the press after Deportivo roared back to victory, 2-1, the team won "the first cup final this season in our difficult fight against relegation."

It was a glorious cameo. "At the end we just hugged each other," Valeron said. "Words were irrelevant, nothing else mattered -- just that we'd taken a disastrous losing situation and turned it around. The fans were unbelievable and we owed them this."

May you have as many more of those afternoons of Spanish genius as your treacherous old body will allow you, and us, Juan Carlos. You truly are the Spanish Zidane.