How will Pep Guardiola and Jose Mourinho approach the Clasico? We have a few ideas 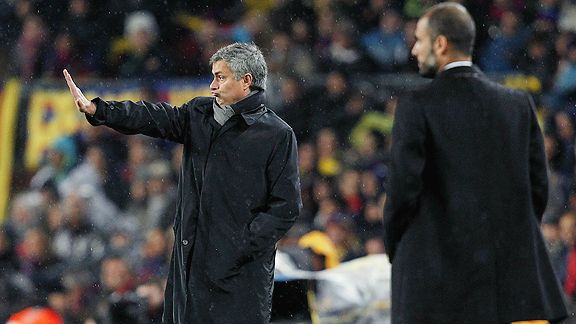 We are about to set off into the unknown -- and in football, just as in life, there's nothing more exciting.

Saturday's Clasico at the Santiago Bernabeu in Madrid is the precursor for a total of four meetings between Real Madrid and Barcelona in the space of 18 days. Something which has never before happened in Spanish history.

Nerves, minds, reflexes and emotions will be tested to the extreme in some, torn to shreds in others.

This "World Series" of Clasicos will end on May 3 at Camp Nou in Barcelona, with one of Spain's two behemoths preparing to play in the Champions League final on May 28. In the middle of the sequence there is the Copa del Rey final, played on the neutral territory of Valencia's Mestalla Stadium on April 20.

Barcelona may have the league all but wrapped up, but these archrivals won't just be playing for pride. Indeed, we cannot underestimate the ripple effect Saturday's game could have on the other matches to follow.

So here -- if you will pardon a little bit of poetic license and accept that this is a product of experience and interpretation, not hard fact -- are some of the notes that I think Real Madrid manager Jose Mourinho and Barcelona's Pep Guardiola may well have been jotting down to themselves in preparation for the inaugural game in a series of clashes which could elevate one club and scar the other for a generation.

In England, they often call a game between two sides that are within touching distance of each other in the league table a "six pointer." This is a 26 pointer. Winning the Clasico might eventually mean nothing in terms of our league challenge. But the fans, the staff, the players and even the president (even him!) understand that this match is about much more than that.

We have all known, since Almeria's 1-0 lead at Camp Nou this past weekend became a 3-1 defeat, that an eight-point gap is too much to overcome. The league title is now a more distant prospect than global economic recovery. But Madridistas want revenge, a reassertion of superiority -- a chance to believe -- after the team's loss in November.

But oh, the value of winning at home, racking up some goals and, you never know, one or two Barca players picking up injuries -- what a start to the next 18 days that would be for us. Victory on Saturday won't win us the Copa del Rey or the Champions League semifinal, but it would test Barcelona's jaw, which I think, at the moment, is made of glass. 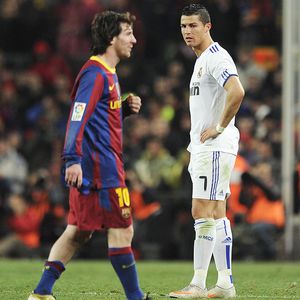 Javier Soriano/AFP/Getty ImagesCristiano Ronaldo looked on in disgust as Lionel Messi and Barcelona cruised to victory at Camp Nou in November.

I've told the players that we will win. I've told them that we could even equal the 5-0 score line from the first match. My Chelsea and Inter teams went to battle against Carles Puyol when I was at Camp Nou. Whether he's the most gifted footballer or not, I'd have signed him in an instant.

But without Puyol, who will likely miss the match on Saturday because of injury, Barca loses speed, defensive passion (he's the only man on that team who lives to defend ... the only one), aggression and leadership. I know that if we can suck Barca's players in, play on the break and take at least one early chance, the Blaugranas could get tired, especially when they don't really need to win this match.

We have been over and over the stats from the first game, and the thumping we received was an accident waiting to happen. My team was raw, the players were tired, we gave the ball away 103 times and Barca scored five goals from only seven on-target efforts.

Now, by comparison, everyone (except Pepe, who keeps doing the craziest things) is on form. My problem is who to leave out given that Cristiano Ronaldo, Emmanuel Adebayor, Karim Benzema and Gonzalo Higuain are all fit, and Mesut Ozil and Angel Di Maria are two of my best-ever signings.

Our key will be winning the ball as early as possible, moving it up the pitch as fast as possible and taking our chances. Early if possible. Within the first 17 minutes of our last match, Barca had scored twice and hit the post once -- the game was over barely after it started.

That's what we must do to them this time.

Shakhtar should have scored four against Barcelona last week in the Champions League. Dani Alvesplays so high up the pitch he's like a winger and sometimes he does the same amount of tracking back, leaving space behind him. We must exploit that.

I was also interested to read that Barcelona goalkeeper Victor Valdes admitted the heavy watering of the Bernabeu pitch makes it one of the most difficult and fast surfaces to gather a low shot on.

Good. Thanks for that, Victor.

But above all, the Clasico is about damaging our rival. If Barcelona is run into the ground, if it happens to pick up an injury or two, and if we win for the first time in six meetings, the psychological wounds will be immense. It's certainly not the state of mind Pep will want for his players ahead of another football war, the Copa del Rey, on April 20. And that's one of the trophies we covet, one that we haven't held high since 1993.

I will pump out my messages to the media, and my players will go to the cup final absolutely sure that they are going to win. Once we've wrapped that one up, Barcelona will be putty in our hands for the Champions League semifinals. Wembley, here I come. I mean, here we come.

If I play Lionel Messi and Xavi, they will be targeted. My philosophy is normally to use my best, my fittest XI on all occasions, to think only about the 90 minutes ahead and to send the team out to win.

But we all know that a draw on Saturday means we will become league champions for the third straight season. Six games left, 18 points to play for and, effectively, a nine-point lead since we would win the head-to-head battle if our teams finish on equal points.

So what I have to resolve in my own mind is this: How much can I trust Mourinho, and how much can I trust one or two of the Madrid hotheads? Would they really try to kick our two key creative players out of the next few games? I've told my staff to prepare for the worst.

Leo is having an interesting time at the moment. A handful of matches without a goal, then three in the past two games, and a lawsuit from his ex-agent claiming 100 million euros in compensation from the Messi family. What's more, his big brother's house got riddled with bullets in a drive-by shooting in Buenos Aires.

Leo is a tough kid, hard-wired not to feel pressure, but Madrid knows that without him we are only special, not exceptional. But resting him ahead of the cup final would tick Leo off. He hates being benched or left out of any game. And would it send out a message that I'm afraid of risking him? Yes, it would.

But even though he has yet to score against a Mourinho team (Porto, Chelsea, Inter and Real Madrid), he's hit seven past Real goalkeeper Iker Casillas. Messi is just about looking ready to explode into top form again and I'd rather risk that he rips Madrid apart ahead of the Copa del Rey final. It would be six consecutive wins for us over our archrival, and that would have Madrid's players questioning themselves all over again.

Bottom line: We will accept the risks and deal with the consequences. If a player gets injured or suspended, so be it. We'll make the best of it. No big deal.

I'm reminded that Barcelona's last two Champions League finals were won with Xavi and Iniesta on the bench, plus Messi not even in the squad back in 2006. And in 2009, Iniesta was half fit, Alves and Eric Abidal were suspended, plus Yaya Toure played out of position, at center half. In other words, my team knows how to adjust -- and still get the result.

But I'm worried about the way we defend without Puyi and Abidal. From day one, I've taught Valdes that one of his key jobs is to play like a sweeper. Keeping his own personal high line, ready to race out of his box if needed -- but usually with Puyol's pace helping to give him cover.

We also must deal with the loss of Javier Mascherano, who will be suspended for this game because he picked up his fifth yellow card of the season this past weekend. Oh, people doubted the defensive midfielder when he came over from Liverpool, said he wouldn't fit in with our style of play, but he's been superb. Now we can only wish he was available so that Sergio Busquets could move from midfield to center half.

Since that can't happen now, I think I'll use Keita in the holding role and play Busquets next to Pique at the back.

But our attack will be our greatest ally. We've scored 135 goals this season, and hit the woodwork 25 times (nine of those from David Villa). If a small proportion of those missed chances start to go in over the next 18 days, we'll win everything.

Beating Mourinho's team on Saturday would be a great way to spark off the Madrid in-fighting again, planting as many seeds of doubt in their minds as possible. But even a draw would be cause for celebration for us. And I think that's what we'll get.

I fancy my team to outscore Real Madrid across two Champions League semifinals, too. So the one-off match, the Copa del Rey, looks to be the most unpredictable of the four games. But winning on Saturday would allow us to take a major step toward starting our first cup final against Madrid in 21 years with a serious psychological advantage.

Bring it, Jose. I still owe you one from last year in the Champions League.