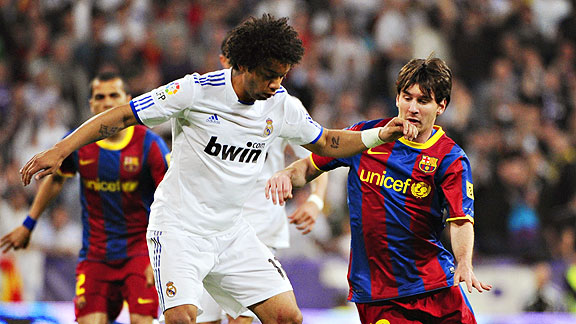 Javier Soriano/AFP/Getty ImagesSaturday's Clasico was merely a warm-up for the Copa del Rey final on Wednesday, when Barca and Real won't just fight for pride but a chance to win a trophy at the other's expense.

I admit you have to be careful and take a drink of brave-juice before you publish your firm disagreement with the football views of two genuinely brilliant and visionary legends of the sport, but both Johan Cruyff and Alfredo Di Stefano drew very different conclusions from mine at the end of Saturday night's Clasico in Madrid.

I suppose that for two missionaries of the game, there are more important concepts than short-term results and winning the next trophy -- which, for Barca and Real, is the Copa del Rey on Wednesday night on neutral ground, at the Mestalla in Valencia. Between them, Di Stefano and Cruyff won as many trophies as Lionel Messi has goals this season (49 so far), and did so with the beauty, majesty and creativity of football deep in their souls.

But when Real Madrid's greatest player and honorary president, Di Stefano, described his team's performance against Barca as "like a mouse against a lion," it was more about anger than analysis.

And Cruyff? Well, to me he represents the epitome of football greatness -- style, invention, wit, eccentricity, generosity and stubbornness. Without this Dutchman, Barcelona might easily have become only Spain's third- or fourth-best team behind Madrid and perhaps Valencia, Atletico Madrid or Athletic Bilbao. His playing, coaching and developmental importance at Camp Nou during the past 37 years has been that significant, in my opinion.

But I have to allow myself to disagree with him this time. Cruyff said that "in disguising itself as a 'little'" club and defending aggressively all over the pitch, Real Madrid reminded him of the Netherlands' "shameful" performance in the World Cup final "when they dedicated themselves to attacking Spain more than playing football."

He also argued that if Real manager Jose Mourinho is tired of always playing with ten against eleven when he faces Barcelona -- a reference to the Special One's claim that officiating tends to go against his team -- then "if he uses Pepe in the same position with the same tactics in the cup final [as he did on Saturday] then he'd better prepare his team to play with nine against eleven because the most normal thing is that Pepe will be sent off this time."

Problem is, Di Stefano and Cruyff are both talking more about Madrid's history and tradition rather than fairly examining the team in the here and now.

This past Saturday, Barcelona again showed that it is a much better footballing side than Madrid at the moment. Los Blancos approached Saturday's match with five consecutive Clasico defeats, including a 5-0 disaster in November. Mourinho has been at the club for fewer than nine months, and with three enthralling battles against Barca to come -- Wednesday's cup final, plus home-and-away games in the Champions League semifinals -- he could still lead Real to its first Spanish Cup in 18 years and its first European Cup title in nine years. 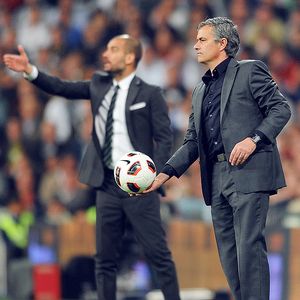 And yes, Mourinho set up his side to play defensively against Barcelona this past Saturday. But while Real didn't win, it didn't lose, either -- it came away with a moral victory of sorts, its confidence in place, if not bolstered.

So I want to know if Di Stefano and Cruyff really think that Madrid should have gone out there, "tu a tu"(me and you buddy, let's see who's better) and tried to outplay Barcelona. Really? Honestly?

After Saturday's hard-fought draw, I also came away with these five talking points, which Di Stefano and Cruyff would be wise to remember:

1. Mourinho is loved by the fans

I was at the Bernabeu on Saturday night and of any name read out, among both teams and coaches, the biggest roar was for Mourinho's. The purists might not like him, but the supporters like what's happening right now.

Spanish football has been technically excellent for years, but with so little contact it was like watching ballet. Over the past few seasons, however, we've seen a toughening up, as La Liga has learned a thing or two from the English Premier League and, specifically, has been influenced by Spanish players -- such as Cesc Fabregas, Pepe Reina, Fernando Torres and Gerard Pique -- who play, or did play, in England. Now pressing is encouraged. Strength allied with skill has become a recipe for success. Yet just because Pepe, Sergio Ramos and Sami Khedira made it physically difficult for Barcelona to express themselves Saturday, there is a widespread feeling that Madrid committed a mugging.

3. Pepe must watch himself

Pepe has made himself hard to love. His red card for trying to kick Javi Casquero's head off when Madrid played Getafe in 2009 correctly brought him a 10-game ban. His interview with El Pais in which he admitted that he is more careful about how he fouls now simply because there are more television cameras helped paint him as a calculating villain.

"I've always had fame for being sent off, and at the beginning of my career I'd be red-carded about every three games," he admitted quite happily that season. HOWEVER his play, particularly against Messi, on Saturday was on the edge, but acceptable. Plus, he won the ball back eleven times. Vital.

He'll probably repeat the role of the enforcer at the Mestalla, so it'll be down to referee Undiano Mallenco (who tends toward the permissive in Spanish terms) to get the balance right between tough, mean pressing and deliberate, dangerous fouling. They are not the same thing and nobody, including Cruyff or Di Stefano, should confuse them.

4. Real's tactics on Saturday were smart

Barcelona played prettier football, though it wasn't performing at its peak, and the Blaugranas went to sleep after going 1-0 up against Real. But if they want to win the Copa del Rey and progress to Wembley in the Champions League final, they will have to perform with much more intensity, concentration, speed, aggression and conviction. When Messi & Co. click, they are still light-years ahead of Mourinho's side.

But the truth of modern football is that brilliant tactics and exceptional physical power can reduce the gap between two teams such as Real and Barca. I, among others, have argued that this Barcelona team, in this era under Guardiola, has the potential to be regarded as one of, if not the, greatest team of all time. It's down to them, however, to prove this by overcoming all obstacles -- fatigue, injuries, bad referees, bad luck and, of course, Real Madrid. Over to you, Barcelona.

5. Pitch will be a key factor in cup final

The pitch will be faster in Valencia because the grass is cut much shorter (it will have been mowed eight times between Sunday and the Wednesday kickoff). This will play into Barcelona's strength, as its passing should be quicker and more accurate. As a result, Madrid's tackling will need to be even more precise to avoid fouls, booking and ultimately red cards.

But there will be something extra about the cup final. I spent Monday interviewing Newcastle United's excellent fullback Jose Enrique. He said that he will happily play out his career in England because he adores the atmosphere there. "It is so, so much better than in Spain," he said.

True, but Wednesday night in the Mestalla will see an even split between Madrid and Barca fans. In case you weren't aware, this is not the norm. At a Camp Nou Clasico, there will normally be a couple of hundred Madrid fans, and vice versa at the Bernabeu. But each club will take well over 20,000 supporters to the neutral venue. So we can expect the atmosphere to be thrilling.

Some players will draw inspiration, while others may wilt or have their concentration broken. Strangely enough, it was Messi who lost his temper a little Saturday as he was abused roundly by the Madrilenos. He kicked the ball at a section of the home support and a confrontation with Pepe resulted. He'll need to keep his head Wednesday.

The football should be splendid in the cup final, but watch out for proper, old-fashioned volcanic heat pouring down from the tribunas at the Mestalla stadium.

If Pep Guardiola is true to his word, Jose Manuel Pinto, not Victor Valdes, will start between the sticks for Barcelona in the cup final. It's a reward for having taken Barca this far in the competition and a thank-you for his excellent work as backup to Valdes during his time at Camp Nou. Some fans want Guardiola to simply pick the better player, but he won't. Pinto is loud, eccentric, jovial and very popular with his teammates. He has brought a winning, hard-working mentality with him, and for that he earns another shot at glory.

Ironically, it is Pinto -- not his more illustrious opposite number, Iker Casillas -- who has already lifted the Copa del Rey trophy in this same stadium two years ago. And how Casillas yearns for that to change. He is a fanatical Real Madrid fan. If he wasn't occupying it professionally as keeper, he'd be behind the goal every week, chanting on his heroes and, probably, hurling abuse at Messi. During his eleven years at the club, Casillas hasn't lifted what he calls "this vital trophy -- a cup we have to win."

In 2004, Madrid's last cup final, Casillas was benched and the second keeper, Cesar Sanchez, played in the 3-2 defeat to a Zaragoza side starring David Villa and Gabriel Milito. Seven years later, Casillas -- who has won everything else there is to win -- has a chance to finally complete his résumé.