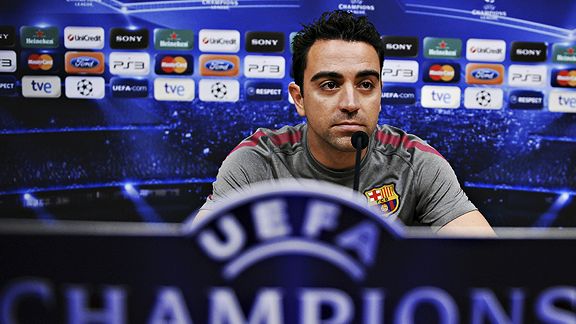 David Ramos/Getty ImagesIn a news conference Monday, Xavi moaned that too little attention was being paid to the actual football between Barcelona and Real Madrid.

I am not slavishly devoted to Xavi Hernandez, but I do believe that he is both the greatest Spanish footballer and a massively articulate, intelligent representative for this sport that we all love.

So I took him seriously when he sat there Monday when he cut lose, verbally, in a Camp Nou press conference room. The demand to attend among the media was so high that Barcelona had to introduce a quota system for those who were allowed to enter for the first time in its 112-year history.

The background was unpleasant: a flurry of accusations of cheating and gamesmanship; claims that Sergio Busquets made racist comments toward Marcelo; retired Real Madrid defender and current Jose Mourinho assistant Aitor Karanka suggesting that the semifinal second leg now has diminished importance because UEFA told both clubs to grow up and stop complaining about each other. You know, it's all the usual nonsense we recently have become used to off the pitch.

But Xavi spoke sense. There have been tremendous moments in these past three Clasico clashes and this, remember, is the Champions League. And it is Camp Nou. I have seen the two great comebacks in soccer -- Manchester United winning here from a 1-0 deficit against Bayern Munich in the seconds added to the end of the 1999 final, and the Champions League final of 2005 in Istanbul when Liverpool, utterly dead and buried, somehow won.

I also was present the last time this cavernous and mighty Camp Nou hosted a Champions League semifinal between these two sides, and Real Madrid -- led by Steve McManaman, Zinedine Zidane and Vicente Del Bosque -- won 2-0, a score that, if repeated Tuesday, would give us 30 more minutes of hyper-tense extra time.

So although I fully expect Barcelona to meet Manchester United in the Champions League final later this month, I am prepared to say Real Madrid has the capacity, in certain circumstances, to cause Pep Guardiola's team to sweat on its lead.

And then it will all be over. Perhaps we will miss this fevered, angry, rude, often stupid period in Spanish football, but Guardiola won't. "Tomorrow this will be finished and we'll be glad," he said about an hour after Xavi actually admitted he was lapping it up, drawing adrenaline from the heat of the hatred between the clubs and was ready for more.

So who, amid the rubble, comes out of this world series of soccer with more credit than when he entered?

About to play just his third game in three months, "Tarzan" has only underlined how absolutely vital he is to the Catalan club. Every defeat this season has been when he has been absent. Gerard Pique performs enormously better when he has his pal beside him, and it is almost as if Puyol's teammates are petrified of losing when he is present. How do they replace him? Can he stay fit Tuesday night and for May 28 if they get there? Who knows, but boy, Barcelona have a Puyol dependency.

I feel very sorry for Madrid's outstanding keeper. Honest and dignified throughout all the mudslinging, author of several key saves and, finally, owner of a Copa del Rey winner's medal, Casillas has been class. But such is the impact of the Champions League defeat last week, the row in which Madrid has embroiled itself and the horror show against Zaragoza on April 30, that Casillas and Sergio Ramos hoisted the cup at the Bernabeu last Saturday with all the enthusiasm of someone who was being asked to put up his arm to admit tax fraud. From triumphant joy to the Barcelona blues in just 10 days. 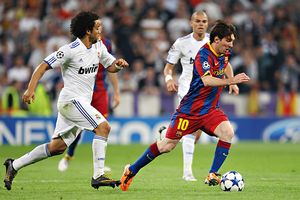 Alex Livesey/Getty ImagesYou can try to snarl at kick him, but you can't stop Lionel Messi, who sought out Iker Casillas at the end of Wedneday's bitter feud to put a consoling arm around his back.

You can try to snarl at him, kick him and smother him, but you can't keep this little genius down. Scorer of all of Barcelona's goals in the world series of soccer, producer of the single most sublime moment of the run of matches (his slalom goal just edging Ronaldo's cup-winning header), and capable of seeking out Casillas at the end of Wednesday's bitter feud to shake hands and put a consoling arm around his back.

He's Real Madrid's Puyol. When Alonso doesn't play, Madrid become a headless chicken -- capable of high-speed movements, but without brains and vision. He has largely applied Mourinho's tactics without breaking the football laws, he has tried to restrain Sergio Ramos from his more excessive moments and, like Puyol, he is more than the sum of his skills. Alonso is a leader and a gentleman.

And when this is all over, is either of the Spanish clubs going to be capable of being champion? Yes, either one will be the favorite to win the final, in my humble view. But will the world be glowing with happiness? Will the enormous feel-good factor that has accompanied Spain's two recent tournament victories and Barcelona's recent love-fest with the planet be present?