Madrid closing the gap on Barca 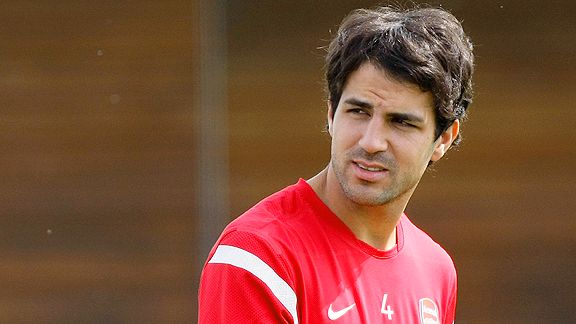 While FC Barcelona answered every footballing question asked of it last season, the inquiry it currently faces is one known to and hated by almost every schoolchild who ever wrote an essay on returning from vacations.

"What did you do in your summer holidays?" catches out the dull of mind, the reluctant students who wish they were still swimming, relaxing or sleeping in, and those who just aren't back into the swing of things.

So it may be when Pep Guardiola's side is asked by Real Madrid to demonstrate at the Santiago Bernabéu on Sunday night how it spent the weeks in June, July and early August. Whether the markedly different ways in which the two clubs have approached the summer has closed the slight gap evident between Barcelona's taillights and Madrid's closing headlights last season remains to be seen.

But let's just say there is a great deal about how the challengers have planned and acted that the champions would like to have emulated. Frankly, Sunday night's game just sits up and begs to be Madrid's first home win over Barça since before Guardiola became the Catalans' coach. (In fact, since May 2008.)

Why? Well, there are a host of reasons, and if Barcelona manages to contain or beat Real Madrid this time and then seal a Supercopa win next week at the Camp Nou, the Madridistas might as well pack up, go home and start getting into Formula One racing or basketball instead.

The first key difference between the clubs is that while Barça's money men have dragged out their long, protracted seduction of midfielder Cesc Fabregas (away from Arsenal) all summer, they have -- in my view -- done damage to the player and his immediate prospects, while Madrid acted with purpose and speed in various dealings.

OK, Barça has completed the purchase of a real jack-in-the-box player in Alexis Sanchez, and he will give Guardiola and the Camp Nou fans loads of enjoyment once the Chilean finds his feet in La Liga.

But Madrid has stormed in, signing Hamit Altintop, Nuri Sahin, José Callejón, Rafa Varane and Fabio Coentrao. And don't be fooled -- this is not a "never mind the quality, feel the width" argument. Not only has manager José Mourinho added some decent talent, he has been able to give the majority of his new signings some proper game time in Real's highly impressive tour of the U.S., England and China.

Around the time that Los Blancos were adding swagger to the muscular nature of their summer, beating Tianjin Teda 6-0, Barça was finally registering a win, over Club América in Dallas. Yet that followed an interesting and predictable defeat to Manchester United, plus a good old hammering from Chivas de Guadalajara.

Much more surprisingly, Barça's tour has looked clumsy and tiring, and has also lacked game time for some key footballers. For example, the images of Barça turning up to practice on some green space in Washington and then getting moved on by the cops might have looked amusing to the neutral supporter, but it wasn't a joke for Barça.

Somehow they didn't realize that a workout in President's Park near the Ellipse might need forward planning and permission, and so they were chased off by a park patrolman. Guardiola is a perfectionist, and his face as the players returned to the hotel, stuck at the lights on the corner of Constitution Avenue and 17th Street, was a picture.

A couple of days later, a morning training session had to be rescheduled because of suffocating heat -- something that happened twice more on the U.S. tour. During the recuperation sessions, Guardiola's players looked tired and seemed lacking in sharpness. Key men like defenders Carles Puyol and Gerard Pique, along with midfield maestro Xavi, have all been seeking full fitness for one injury reason or another.

There have been mini-successes, like young midfielder Thiago's goals; Seydou Keita's eager, powerful fitness; and flashes of play from attackers David Villa and Andres Iniesta. But Leo Messi, Javi Mascherano and Alexis Sanchez took no part in the tour. And don't even ask about the Fabregas situation. If he isn't captured, then it will be a major letdown and embarrassment for the European champions. Even if he is signed, he will arrive without a proper preseason behind him, either with Barça or Arsenal, having not appeared in any exhibition matches with the Gunners.

Just before departing for Cataluña, Guardiola used a tart phrase that told you everything he thought about his situation: "Once upon a time we used to do preseason training ... now we need to go on world tours."

Barça is deeply in debt, and this type of tour pays fat fees, enhances the brand and is premium territory for some of Barcelona's key sponsors. The club should come out of the tour at least $6 million up. That's fine. But Guardiola prefers order, fitness, concentration, moderate northern European temperatures and a proper preparation for the test of fire that opens his club's season.

"We have left it a little bit tight to be in form for the Supercopa," Guardiola said during the week. Perhaps he might like to reflect on his decision to be the last of La Liga's teams to return to training -- by a week.

However, if Barcelona's stars benefit from the extra rest when the big prizes are handed out in May, then it's hats off to Pep. 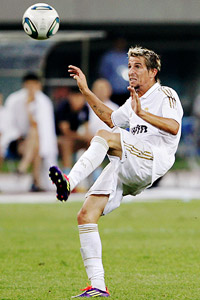 So, what of Madrid? Business done early meant that Varane has enjoyed a handful of impressive matches, Coentrao has experimented across three positions, and Callejón has both scored and made goals.

Not since 1987 has Madrid completed such a successful preseason, at least statistically: seven straight wins, 27 goals and the majority of its players not only present but injury-free and patently fit.

The club's leading scorer this summer, Karim Benzema, is half the man he used to be ... but twice the striker. Zinedine Zidane -- newly appointed as sports director of the club now that Jorge Valdano has been removed (as predicted in this column last year) -- advised his countryman to go to a health spa in the hills between Austria and Italy and shell out ¬5000 on a week's detox and weight-loss program.

Benzema is back seven kilos lighter, receiving praise from the Special One -- "Now Karim and I view football the same way," Mourinho said -- and has scored eight times in seven matches (and provided four assists as well).

The offseason hasn't been perfect for Mourinho's side, given that Sahin -- potentially a vital player for Madrid this season given how atrociously the team tended to play without Xabi Alonso last term -- is injured.

But it was the attitude Madrid showed, above all, that set it ahead of Barcelona this summer. Perhaps it's easier to be the vengeful, gritty challenger than stay the standard-setting champion, but I was struck by how focused, fit and aggressive Mourinho's squad was in all its games.

His men, too, globetrotted, because the club needs revenue and its president has always believed that marketing and football are inseparable. But there was an edge, an order and an organization to Madrid's work that indicates it will be a grim challenge to Barcelona over the next few days in the two-legged competition.

Don't be fooled by anyone who tells you that the Spanish Supercup is a preseason trophy with little value. Mourinho believes, strongly, in the power of psychology in sport. And the impact of starting the new season with the first trophy, especially won against its Champions League conquerors, means his team will treat this as if it were a rematch of those vicious battles in April and May.

If you enjoy your football full of revenge motifs and with a great backstory, then don't miss Real Madrid versus Barcelona on Sunday.