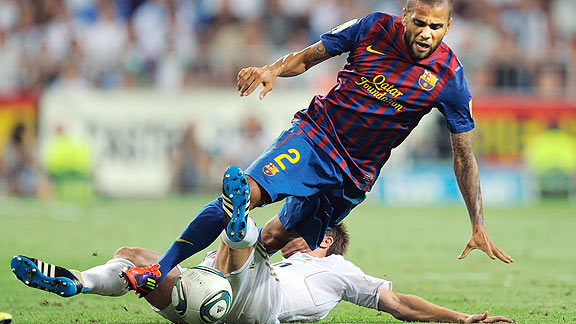 Down in the bowels of the Santiago Bernabeu stadium Sunday night, I was chatting to a friend in the Spanish Football Federation. He allowed me a peek into the television "flash zone" where ESPN correspondent Martin Ainstein was among a privileged handful conducting extended one-on-one postmatch interviews before the players headed to meet the rest of us in the mixed zone. Hidden from the wider view, FC Barcelona President Sandro Rosell arrived, saw Andres Iniesta and couldn't contain himself.

Rosell, an amateur footballer of note who played with Pep Guardiola's younger brother, Pere, is an athletic-looking fella. And with all the strength he owns, he bear-hugged Iniesta, lifting the little World Cup winner off his feet with an unrestrained, very boyish smile of gratitude and glee splashed all over his face.

You can watch the second leg of the Supercopa at Camp Nou starting at 5 p.m. ET on Wednesday on ESPN3.com. Click here to watch it.

Sometimes, little snapshots like this one tell you a great deal.

Rosell is a Catalan who has Barca blood running through his veins. So I wouldn't claim great significance in the fact that he was pleased with Barcelona's 2-2 draw with Real Madrid in the first leg of the Supercopa. But with some Madrid players still milling around this television VIP zone and Rosell having played the straightest of straight bats all evening in the company of Real Madrid president Florentino Perez after the two clubs very nearly cut all diplomatic ties over the past few months, it was still a remarkably open display of utter relief.

As Pep Guardiola said in the postmatch news conference, which was punctuated by a small light bulb exploding above his head in midsentence and causing a good deal of fright, "My player's smart heads and generosity of hard work covered up for what their legs still weren't quite ready for." 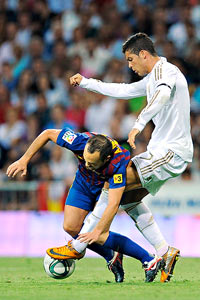 Rosell, if not Guardiola, patently feared that this currently undercooked, injury-hit Barca squad might come to the Bernabeu and be handed a score line to exact revenge for November's 5-0 humbling of Madrid at Camp Nou.

Just look at the facts: Guardiola's first competitive XI of the season lined up without five of its World Cup winners; Alexis Sanchez made his debut; Javier Mascherano played out of position at center back again; Barca went down 1-0, and avoided being down 2-0 only because of what was probably the best save of Victor Valdes' life; Lionel Messi vomited on the pitch because of stomach problems; and Pep's players had the oxygen choked out of them in the first 30 minutes by the best Real Madrid pressing I can remember.

There were moments, before David Villa's extraordinary goal, when Valdes, Iniesta, Eric Abidal and Dani Alves seemed to be working treble time to save the hides of their invisible teammates. I have not seen Guardiola's players give the ball away so often, so carelessly, so needlessly, and I'm including the 1-0 defeat at lowly Numancia in Guardiola's competitive debut as Barca's coach.

I had had a briefing before the weekend from a good Real Madrid source that a huge percentage of Mourinho's preparation in preseason, across the U.S., China and England, had been based on pressing like hungry Rottweilers and counterattacking with chilling speed and efficacy. Initially on Sunday, the first part of that equation worked like Swiss clockwork. But until Mourinho's team perfects the latter part, the gap between Real and Barcelona will remain.

Cristiano Ronaldo, Mesut Ozil and Karim Benzema all failed to bury the game and give Madrid a huge advantage for Wednesday night's Supercup second leg, and Barca converted its only real chance of the night -- gifted to Messi by some woeful defending.

Those who don't like stats have a shock coming. Under Guardiola, Barca averages 68 percent of possession and has regularly sneaked up to a performance where it has the ball almost 80 percent of the time in a match. Watching this team the past three years has been like watching a modern sporting miracle. But at the Bernabeu on Sunday, Barcelona only barely managed an advantage in this most fundamental of advantages for its style of play -- 52 percent against Real Madrid's 48 percent.

That tells a story not only of how often Madrid robbed the ball but of how well, in general, it kept the ball and used it once in possession.

So there are a number of plus points for Mourinho to take to Camp Nou. And you would imagine that Madrid's first proper test of the season has sharpened his players' reactions, appetite and focus still further.

Despite Barcelona's excellent result given the circumstances, this trophy is far from won. Should Madrid go 1-0 up on the break at Camp Nou on Wednesday, I, for one, will be fascinated to see whether Ronaldo & Co. can press and harass Barcelona sufficiently to defend that lead.

Above all, let's hope these teams treat us to another enthralling display of football like the one we saw on Sunday, a match stained only by two glaring negatives. Pepe, in particular, represents a growing ethos among Mourinho's players that they can foul Barcelona's players, then fake indignation that their victim is somehow exaggerating or acting. There was a tackle by the Portuguese international on Alves (yes, they are the same two players involved in the red-card incident that caused so much controversy this past April in the Champions League semifinal) that I thought could easily have merited a red card for Pepe. Yet some Real Madrid players felt free, after the match, to slam Alves for what they think is his tendency to feign injury. 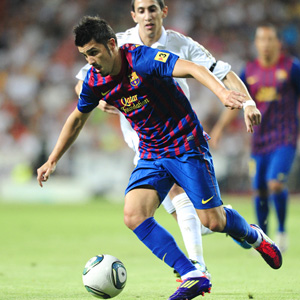 Perhaps the majority of modern players do this, and it is reprehensible. But Pepe is behaving against Barcelona like the big kid who isn't good enough to get a game with his own age group at school recess, so he drops into the little kids' match only to find that they are more skillful than him, too. As a result, he runs around barging them over and shouting away their claims for a foul.

Adopting a physical approach is fine. There are boundaries, and the referee is there to enforce them. Ballet dancing this ain't. But to play right up to, and beyond, the rules of physicality and fail to accept the consequences of your actions is demeaning, juvenile and dispiriting to witness.

Which brings me to the second, far more reprehensible stain on Sunday's game. Because Alves was being singled out for treatment by Pepe again, large parts of the Santiago Bernabeu crowd repeatedly made monkey noises when the Brazilian approached the ball. This is racism, pure and simple. It is Neanderthal in concept and should, I believe, be criminal to practice. Worse still, there were morons at Camp Nou last season who copied this behavior to "pay back" their Madridista equivalents by abusing Madrid's black players.

Spain should be designated as a place of special beauty by the World Heritage Centre's football division. La Liga is producing some of the most thrilling, spectacular, engaging, inventive and uplifting football in the history of this sport. I demand that right-thinking people within Spanish soccer, and those who look in on it from around the world, speak out and force action against those who bring racism, through ignorance or evil intention, into this footballing temple of temples.

As for Wednesday night's second leg, miss it at your peril.