Jose Mourinho reaps what he sows 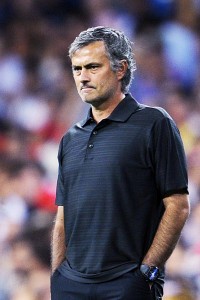 Pierre-Philippe Marcou/AFP/Getty ImagesAbout face: Jose Mourinho called out Sami Khedira for Real's loss to Levante, even though last year he said he would never publically blame one of his players.

On Saturday night at Camp Nou, a journalist colleague was commenting on how long it is taking the Spanish Federation to conclude its disciplinary action against Jose Mourinho and Tito Vilanova for the offenses they committed at the end of the second leg of the Spanish Supercup at Camp Nou on Aug. 17. Then the football gods intervened and, at least in the case of Mourinho, some natural justice was promptly meted out.

During the 1-0 defeat to Levante on Sunday, Sami Khedira was sent off for jumping into a ruck of players and pushing Sergio Ballesteros to the ground. It was the German midfielder's second booking and there were no questions, no arguments -- he had to walk.

After that remarkable, uncomfortable defeat, Mourinho was clear-cut and brutal about blame. Explaining that he had specifically shown a video to his players which, he claimed, warned them that Levante were both tricksy and provocative, the Special One was furious that Khedira had behaved as he did. "The defeat is the fault of one of my players who knew very well that there would be provocations like that but fell for it. I hand him part responsibility for the defeat and I've no problem in telling him that directly."

This from a man who told the Spanish television channel Canal+ last season that he would never publicly blame one of his players.

While Khedira was naive and the red card was earned unnecessarily, Mourinho failed to acknowledge the blatant irony. Khedira's rash, self-indulgent action precisely mirrored his manager's sneaky, hot-headed, immature decision at Camp Nou in August when he crept round the back of a melee of players to poke his finger in the direction of Vilanova's eye. The incident was widely publicized, Mourinho hasn't yet been punished, and it summed up the world-is-against-us attitude he's been inculcating in his players, one that seems to suggest they can do and say practically anything they want in retribution.

Should Mourinho really be surprised that one of his players, consciously or subconsciously, mimics his manager's actions, gets sent off and costs the team a painful defeat?

Real Madrid has been shown 16 red cards since Mourinho took over, the last couple of which have included Marcelo's disgusting two-footed lunge at Cesc Fabregas in the incident which sparked all the trouble in the Supercup and, again, Marcelo diving (you may call it cheating if you wish) to try to gain a penalty in Zagreb when he had already been booked.

During Sunday's disaster at Levante, the often-ridiculous Pepe deliberately stamped on Xavi Torres while he was on the ground and should also have been sent off.

If there is fault to be shared, the Real Madrid manager must accept a large measure of it.

And it is noticeable that precious few chose to highlight the fact that Madrid, with half an hour left, was genuinely disadvantaged when Vicente Iborra's handball in front of goal went unnoticed and unpunished when it should have brought Los Blancos a penalty and Iborra a red card.

Mourinho has a powerful squad, the majority of his players still enjoy training under the Special One, and the Spanish Supercup ties showed, clearly, that the competitive gap between Madrid and Barcelona has narrowed. But the dark disinformation campaign that he is selling to his players, parts of the media and some of Madrid's dimmer fans is counterproductive and may yet help cost him the trophies that he craves.

The evidence came Sunday night at the Ciutat de Valencia stadium and I, for one, had no sympathy for the defeated coach or his finger-jabbing blame exercise. 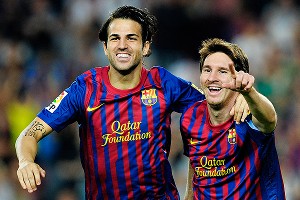 Josep Lago/AFP/Getty ImagesThe perfect partnership: Cesc Fabregas and Lionel Messi are playing a huge role in either scoring or helping create the bulk of Barcelona's goals this season.

I appreciated the dignity and patience of Osasuna's Damia Abella Perez on Saturday night at Camp Nou when he stopped to chat with me after his team's horribly embarrassing 8-0 defeat. Let's face it, the Osasuna defender would have been forgiven if he never wanted to talk about Barca ever again. I wanted to get his view on the partnership between Cesc Fabregas and Lionel Messi, one or the other of whom has now scored or "made" 25 of Barcelona's 26 goals this season.

Messi has scored nine times and given seven goal assists, while his new teammate has hit the net four times plus making three more.

It's a surprise to me that some are surprised at this blossoming partnership.

Messi, Fabregas and Gerard Pique had nearly three seasons together in the Barcelona junior ranks, learned the football Braille that is taught at Barca's La Masia academy (they could read each other's play with their eyes closed), and are firm friends. Damia is a little older, but partly learned his trade in the same FC Barcelona school of excellence and confirmed my suspicion.

"It's far easier to be a world-class player because of your talent than to be a world-class player and also perform in the way this Barca side do" he told me. "The concept of football which they rely on is very, very difficult to learn and when it clicks, it's almost impossible to play against. Almost everything you are taught at La Masia is about gaining superiority of numbers -- finding two-on-one or, more likely, three-on-two situations in all areas of the pitch. Cesc's addition means that Barcelona are even better at doing that than they were."

I'd rather do without a striker or a defender in order to have an extra man, particularly like Cesc, in midfield.

In my time working in Spain, I've seen good footballers like Alexander Hleb, Dmytro Chigrinsky and Zlatan Ibrahimovic arrive and completely fail to "get" the Barcelona playing instructions. Not because they are inherently faulty, but because it's incredibly intricate, quick and hard to learn. Henrik Larsson took several months to master it, but did so because he possesses one hugely intelligent football brain. David Villa has been a success at Camp Nou, though he was incessantly caught offside last season because the timing of his movement is still set on a Valencia clock, not that of Barcelona.

Players like him and Larsson were used to being supplied with possession the instant their movement earned them a little bit of space -- it just doesn't happen that way at Barcelona.

Thus far, Fabregas has played in a couple of different midfield positions and also as the "false" center forward role. He has the capacity to burst into the box and score, timing his runs not only to beat the offside trap but also in the certain knowledge that Xavi, Andres Iniesta and particularly Messi will release a perfectly timed pass. What's more, Fabregas understands how to supply the aforementioned players when the roles are reversed.

Pep Guardiola heralded the "anarchy" that Fabregas is bringing to Barca's play (i.e., it's far harder for opposition marking schemes to nullify the Spanish champions). He also emphasized to me, postmatch, that the midfield area is the most important part of his team's creative brilliance. "I'd rather do without a striker or a defender in order to have an extra man, particularly like Cesc, in midfield," Guardiola said.

So now look back at the price Barcelona paid. Look back at their prolonged pursuit of the 24-year-old. Look at how often Fabregas has had to sit on the bench for Spain in recent years. The sheer joy in his game, his power and creativity, his combination play with those who are La Masia-trained make him, potentially, worth double what Barca actually paid for him. It's also a joy for Messi to have another teammate who is completely tuned in to his personal wavelength.

Football players are not that different from you or I. Going to work is a thousand times more satisfying when there are colleagues who are fun to team up with and who help you or the company achieve targets.

Last word on the subject from Guardiola: "I don't have a remote control to make the players move -- Cesc still has to learn that sometimes there are demands which mean that he needs to remain static rather than create anarchy." Which is to say that in the Maestro's mind there is still a good deal more to come from his new star apprentice. Something that should make the rest of La Liga -- indeed, all of Europe -- pretty nervous. 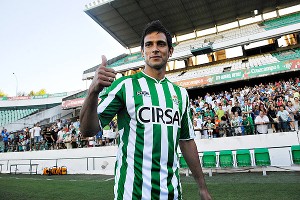 Cristina Quicler/AFP/Getty ImagesRoque Santa Cruz has arrived on loan to Real Betis, a tactically ambitious team that is punching above its weight so far this season.

For the first time in such a long time there is a healthy sheen about Real Betis. Traditionally the second side in the Andalusian city of Seville, Betis is nonetheless one of Spain's important and trophy-capable clubs.

That it sits atop La Liga is an anomaly, and a position it cannot possibly sustain. But how Betis played in winning away at Athletic Bilbao this past weekend had grace notes of the performance Pepe Mel's team gave at Camp Nou last season. Despite losing 5-0, the team's game plan, attitude and quality of football were easily among the highest of the visiting sides during Barcelona's march to the Spanish and European titles. Then they famously ran Barcelona off its feet to win the second leg.

Above all else, Mel seems tactically ambitious. And in players such as Jonathan Pereira, Javi Chica, Iriney and Nelson, plus shrewd loan signings like Roque Santa Cruz and Jefferson Montero, the manager has motivated men who will tough the campaign out with him as he attempts to take the fight to the established sides following promotion.

Now that the contentious, dislikable and deeply divisive president Manuel Ruiz de Lopera has departed, the feeling at the club is one of optimism. The players have agreed on a bonus system with the board that emphasizes incentives based on performance to the detriment of inflated basic wages. Barcelona relies on the same concept, even if at vastly higher original wages. And Betis is also investing over half the money it received for selling its talented but hot-headed Cameroon international Emana into redeveloping its training ground so that the Cantera (youth system) can be prioritized. Unless you are a Sevilla fan, it's hard not to wish Betis well.