Plus, Iker Casillas and one of the world's most promising strikers 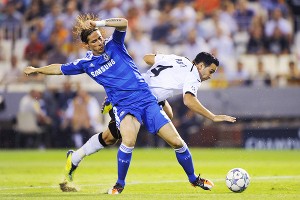 He isn't green or fat, he doesn't have a movie franchise and there is no Princess Fiona in his life, but Valencia defender Adil Rami is happy to answer to his nickname, "Shrek." The French-Moroccan will freely admit it's because he eats voraciously and has been known, just occasionally, to belch. Loudly.

Other than that, Rami has far more in common with the Eddie Murphy Donkey character in DreamWorks' long-running series. This is Rami: noisy, permanently optimistic, bubbling with vivacious energy and, I'm sure, unaware of where his "off" button is. In fact, he plays like he lives -- at full volume, remembering that it's best to enjoy the good times.

I saw that firsthand at the Mestalla last week after Valencia and Chelsea ended in a 1-1 draw in the Champions League. I headed to the mixed zone where journalists and players meet to interview Chelsea keeper Petr Cech. It went well, but there was a hell of a clamor to one side of us. Once the Czech moved on, I turned to discover Rami fooling around, at megaphone volume, with two eccentrically dressed friends who had come down to film him hooting and hollering about the match.

Given that we all want our footballers to have a dose of color to go with their skill, there were no complaints on my part. But this was an it's-my-territory-and-I'll-have-a-laugh-if-I-want-to behavior you'd expect of a senior player who had been at the Mestalla for years and lifted trophies, not a rookie struggling with his Spanish and who is barely through the door.

Rami, who arrived at Valencia this season, admits that "I'm an extrovert. Even though I don't speak much Spanish yet I reckon I'm the most entertaining guy in our dressing room."

But the three things I admire about Rami are as follows:

1. Rami is a survivor.
Before there was any inkling that he might become a 6 million-euro, French title-winning and Champions League central defender, Rami was a refuse worker. That's right. Today, at age 25, he earns a seven-figure salary, is a starting center back for France, and last week he had to make sure he had nothing else in his pocket so that Fernando Torres could fit snugly in there. (In fact, Blues manager Andre Villas-Boas hooked the Spaniard with 20 minutes left because Shrek had battered him, physically and mentally.). But when he was a child, Rami's father abandoned the family home in the medieval southern French town of Frejus. Money was scarce, Rami was a potential bread-earner, and the remedy was obvious. The 16-year-old had to try to add paid work to a schedule that included school, training, and chasing girls.

"When my dad abandoned us, my mum needed money and so she became a cleaner for the local council," he recalls. Rami would rise at 4 a.m. and get to work by 5 a.m. "I started working and held down several jobs at the same time. I worked as a mechanic as well as cleaning the streets and removing graffiti from public walls. I'd work till 12 or 1, have something to eat, a quick nap and then go to [football] training.

"School could have got in the way, but I never listened in class," he continues. "I was always desperate to be up running about and playing football. One teacher called me a 'phantom student' because he wasn't sure whether I really existed or was just a figment of his imagination. I used to dodge school and go off to Cannes or Saint-Tropez to chase girls -- I like being a sex symbol. Doesn't everyone?" 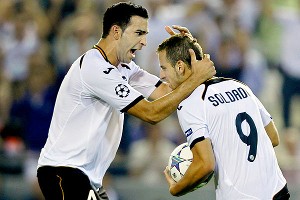 AP Photo/Fernando HernandezSomething to shout about: Adil Rami congratulates Valencia teammate Roberto Soldado after he scored from the penalty spot in the Champions League against Chelsea.

2. Rami is an old-school defender with skill.
Unafraid to use his brutish physique to good effect, he is nevertheless not as brutish in his treatment of opponents as, say, Pepe. "Hard but fair" is the phrase best used to describe his style of play.

On a handful of occasions last week, the Frenchman allowed Torres a head start but still caught and patrolled him out of a danger area. Rami was physically superior. He also got away with what looked like a blatant penalty on the Spanish striker but hey, you ride your luck. Rami also showed an increasingly sensible use of the ball when in possession.

He's not all about defending, either. Back on Match Day 1 of the Champions League in Belgium against Genk, Rami produced a stunning, technically excellent overhead kick to crash the ball off the opposition crossbar.

He is not, by any description, the finished article. He is raw in his decision-making and will incur red cards. But he contends that: "People are always impressed by my strength and power -- I just do my job. I go out there to defend well and if I can add a little more than that, then I'm delighted. For instance, I admire Nesta from Milan and Lucio because they are both defenders with talent to bring the ball out elegantly and to lead the team from the back."

3. Rami (and Diego Alves) represent the way forward for Valencia.
You will know by now, I'm certain, that Valencia's debts very nearly put the club out of business a couple of seasons ago. It cannot complete the construction of its impressive new stadium because the economic crisis means it is unable to profit from selling the current one. At one stage, the amount Valencia owed was heading towards 600 million euros.

Now more than 200 million euros has been cut from that toxic debt and the club's trajectory under president Manuel Llorente is extremely positive. However, the majority of the team's crown jewels have been sold or released. Gone are Carlos Marchena, Nikola Zigic, David Villa, Vicente, David Silva and, of course, Juan Mata. That exercise raised around 120 million euros and cut the wage bill dramatically.

Yet somehow manager Unai Emery got Valencia out of the Champions League group stage last season and, commendably, earned the team automatic Champions League football this term. If he is to continue doing that, the sale of players like Roberto Soldado, Ever Banega and Pablo could not have been countenanced -- not in the short term.

So they have all been retained, while Alves -- who was utterly brilliant against Chelsea -- and Rami (among others) have been successfully added at relatively low cost.

Which is the key. Until Valencia's youth system produces a gem or two, there is nobody left whom the club can sell to generate huge profits, not if it wants to continue playing at the highest level and continue earning the 30 million euros which should come its way in the Champions League group stage.

Valencia has to scout and buy brilliantly. Then sell for profit.

Looking at Rami and considering the vastly greater wealth of the English Premier League, I can only deduce that a club like, say, Arsenal or Liverpool -- where Rami could quite comfortably improve their defending -- must have inside information that he is an international art smuggler, or perhaps that he believes he was brought down from the planet Zap by football-loving aliens. Otherwise, why the heck didn't one of those teams invest the mere 6 million euros it cost Los Che to buy him in January?

When Rami eventually goes to the EPL, as he inevitably will in the next couple of seasons, I'd expect his price to have tripled. Meantime, Valencia enjoys his qualities, doesn't pay him especially high wages and, in due course, it will make a big net profit.

Emery has a squad at his disposal that could feasibly win the Copa del Rey or the Europa League and, crucially, claw its way to further Champions League football next season. If that happens and his scouts continue to discover buy-short-sell-long assets like Shrek, Los Che will, one day, haul themselves out of the worst debt crisis in Spanish football history. 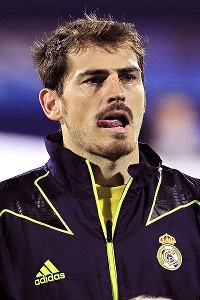 My general admiration for Iker Casillas knows almost no bounds. Brilliant athlete, superb club representative, World Cup-winning captain and a good lad, too. But he has won even more brownie points from me this season for speaking out against his manager. When he struck the first blow against Jose Mourinho's absolute rule that the referee must be undermined and criticized as a matter of policy (after the Spanish Supercup's second leg), Casillas began a process that has made the Madrid dressing room healthier.

There was mutiny in the air recently. Perceived favoritism, un-Madrid-like behavior in public, the hanging out to dry of Sami Khedira after the Levante defeat -- the Spanish players in Mourinho's dressing room were coming to a boil.

Casillas, having weathered the storm of making peace with Xavi and Cesc Fabregas after the Supercup, was the indicator that Mourinho can be disobeyed, or at least confronted, to no great harm. Thus it is that a great deal of ill feeling has been thrashed out between the manager and players like Xabi Alonso, Alvaro Arbeloa, Casillas and Sergio Ramos. To his credit, Mourinho has reacted intelligently, given some concessions and topped the whole happy-smiley period with a barbecue last week.

For the moment the mood is unified, positive and, as such, dangerous to the reigning champion Barcelona. The workers spoke and the boss listened. Hats off to all involved.

Just a final note that Samuel Eto'o sacking his agent and informing FC Barcelona that he never wanted to sue them for a part of his transfer value to Inter Milan (claiming that his agent had been the one driving the action) is not the only good piece of news for the Catalan club. The Samuel Eto'o foundation in Cameroon, partly funded by Barca, has social, medical and educational aims. But it's also a football campus. Already it has provided three players who are performing in the youth version of the Champions League (called the NextGen Series) in which Spurs, PSV, Inter Milan, Marseille and Barca all compete.

Defenders Vivaldi Leonid Bakoyock and Frank Bagnack are playing at a high level for their age, but Jean Marie Dongou, a born goal scorer, is a striker who I warn you here and now is absolutely off the scale. "His potential is limitless," his European Cup-winning coach, Oscar Garcia, told me the other day. So now, dear ESPN readers, I have to say that you must jot the name down and watch his progress. Jean Marie Dongou is a footballer who, if not struck by bad luck, is going to become one of the world's greatest, most dangerous and most thrilling strikers over the next 15 years.