Plus, paying tribute to Spain's king of goals, David Villa 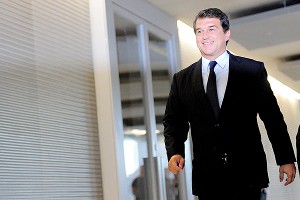 Jose Lago/AFP/Getty ImagesJoan Laporta seems to think he can grandstand his way out of trouble in court. But his antics shouldn't detract from his contributions as Barcelona president.

The former president of FC Barcelona, Joan Laporta, tried for a little bit of comedy in court Monday.

Laporta is a man who has a permanent twinkle in his eye and, in my definition at least, is a bit of a lovable rogue. That is to say he lives life with a kind of Errol Flynn passion, often swashbuckling his way through challenges rather than applying finesse. He's been known to drop his trousers in Barcelona airport in protest at the way he felt he was being treated by the branch of Spain's police who were most associated with the reign of the dictator General Franco (a man detested by hardline Catalan nationalists).

Laporta was also famously pictured dancing the night away with a massive stogie in one hand and a bottle of French champagne in the other -- the contents of which had been sprayed over him and at least one of his female companions -- after Barcelona beat Madrid 6-2 at the Santiago Bernabeu.

He's the kind of guy who admitted to me that, as a schoolboy, he changed his hairstyle to the "Beatle" cut that Johan Cruyff wore when he arrived at Barcelona in 1974 and who stormed his way to victory in the club's presidential elections of 2003 thanks to a clever "sleight of hand" announcement that his campaign had reached agreement with Manchester United on a price for the transfer of David Beckham. Those of us who had been following and reporting the deal for months knew that United had also agreed on a price with Madrid and, crucially, Beckham had decided to move to the Bernabeu. But the gambit worked for Laporta, and now I hope you see that there is a measure of affection and no pejorative intent at all when I describe him as roguish.

So there was no surprise at his jaunty I'm-one-step-ahead-of-you-all tone of voice in court in Barcelona this week. His lawyer was finishing cross-examining him, Laporta was on form, and when his legal representative had made all his points, the former Barca boss joked: "Is that all? Really -- that's a pity!"

Obviously it was for effect. Laporta, who is probably the most important president in Barcelona's 112-year history, serving from 2003-10, is a raconteur, as comfortable with words as Lionel Messi is with a football at his feet. I think he sees himself as JFK reincarnated, and he thinks there is no situation out of which he cannot dance courtesy of his quick wits, Teflon confidence and articulate manner.

So why was he in court? Again?

This time it is a good deal simpler than the legal action that a Barcelona socio (member) is pursuing against him and former directors from his board. This time, a football agent, Bayram Tutumlu, claims that Laporta owes him 10 percent of just over 10 million euros he made from Uzbekistan billionaire Miradil Djalalov via the latter's company, Zeromax.

Laporta freely admits that he acted as a consultant and advisor to Djalalov, that he and his firm of lawyers earned the 10 million euros, and he points out that various deals he did between FC Barcelona and Djalalov earned the club approximately 3 million euros, which would have become 5 million euros had a friendly match in Uzbekistan not been abandoned.

Whether Laporta or Tutumlu is telling the truth about the commission, I know not -- and could care less.

What is interesting, I'd argue, are the howls of anguish and anger from some media and fans here in Barcelona.

At Camp Nou, they ask that their president and directors lay down multimillion-euro guarantees against their future behavior before taking office. The rules also state that the presidency is not a salaried position.

When Laporta took charge in 2003, he found a broken club. Practices were very poor; the basic product, football, was atrocious; the club's finances were disintegrating; and FC Barcelona, in general, needed to be dragged kicking and screaming into a new century.

Laporta helped find and then backed Frank Rijkaard to be signed as head coach; he helped sign Ronaldinho; and, with the assistance of the brilliant Brazilian, lit up the European scene as Barca stormed to Spanish and European supremacy.

There were down times. There were serious disputes. Mistakes were made. But Laporta then went on to back the shared verdict of Marc Ingla, Johan Cruyff and Txiki Begiristain that Pep Guardiola should take over as coach. Laporta was also a fundamental part of the way in which Barca, for some years now, has sculpted the club's footballing and commercial development around the genius of Messi.

I'd also like to make special note that Laporta made it a crusade to eliminate racist behavior from Camp Nou -- which caused some radical Barca fans, the Boixos Nois, to make death threats and to pursue him for many years, simply for doing an honest, brave job.

The net gain for Barca after the Laporta years has been immense. Now he's a politician and he's suffering under a flurry of lawsuits. I hope justice is done, one way or another, and that Laporta is allowed to move forward in his life and work. I will not apologize for his flaws -- he must face the music. But I will not allow his era to dissipate without it being firmly marked that, pound for pound, he is Barca's best, most successful and probably most important president in 112 years of history.

However, I also think that the joke Monday was actually on him. Laporta used a phrase that gentlemen through the centuries have feared hearing from their better halves -- "Is that all? Pity!"

And that expression applies to his presidency. Instead of finishing to flourishes and merited fanfares, Laporta is taking his leave of the football stage arguing bitterly in public with his successor Sandro Rosell and fighting for both his reputation and his assets in the courts of Barcelona.

Is that it? Really, president Laporta? Is that truly the way you want to sign off from a period of intermittent footballing brilliance and regular institutional intelligence? Joking and strutting in court is for prosecuting counsel, for the defense attorney, not for someone who made the club he loves great again.

I watch all this and share one part of his sentiment: What a pity. 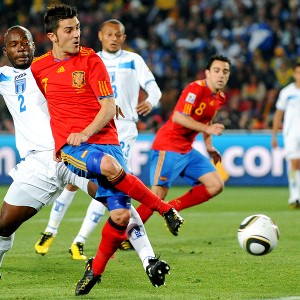 Let's pay our respects to David Villa. He has become the first Spaniard to score 50 international goals. His scoring rate is viciously fast. And what's more, he often has to contend with Fernando Torres, Fernando Llorente or Alvaro Negredo being chosen as the main central striker while he improvises on the left touchline, which, I think, makes him peerless.

Both Llorente and Scotland captain Darren Fletcher told me this week that Villa is not only world-class but en route to legendary status. I agree, and I would also add that if there is a nicer, more straightforward and reliable person in this cut-throat business of scoring top-level goals, I have yet to meet him.

And finally, a note that there is a very important and interesting game for Real Betis and its charismatic, organized, likable manager Pepe Mel on Saturday.

Betis travels up from the deep south of Spain to the capital to play a team that is "beatable" but which, if you are dozy, can easily score six or seven goals against you: Real Madrid.

Across the breadth of a season it is not vital for Betis to defeat Jose Mourinho's expensively assembled galaxy of stars. Survival in the division and the achievement of whatever objectives Mel has set for the club will come from successful visits to other, more comparable clubs. But what is vital is that Mel shows himself, his players and his president that he is precisely the go-ahead, thoughtful football organizer that he appears to be.

Like players-turned-managers Rafa Benitez, Quique Sanchez Flores and Vicente del Bosque, Mel started his playing career with Real Madrid. He has a lovely expression to cover what is going on this week, saying: "If I'm not optimistic about what lies in front of us, if I don't show my players that I believe that we can win, then what's the point? I am the captain of this ship and even if everyone is pessimistic and loses confidence, we might complete our voyage successfully. But without confidence and optimism the journey will be long, tortuous and we might feel sea-sick. I intend that we and the fans enjoy this."