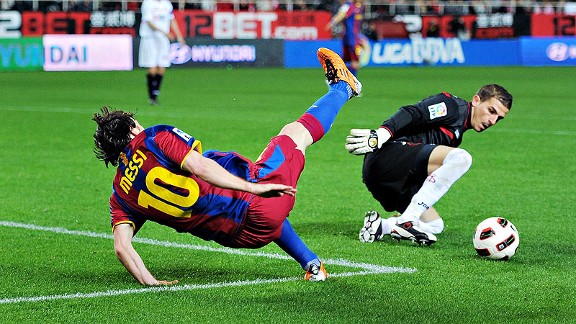 Jasper Juinen/Getty Images Sevilla's Javi Varas stopped Lionel Messi at every turn this past weekend, including on a potentially game-winning penalty kick.

I'm happy to report that we continue to live in the time of unexpected heroes here in Spain, following last week's mention of high-flying Levante being piloted to a joint lead atop the table by burly but mighty Sergio Ballesteros.

The "Frogs" from Valencia kindly reacted to their debut mention in this ESPN column last week by destroying Villarreal 3-0 at El Madrigal and going to the top of La Liga outright for the first time in their history this past weekend. Thanks to Levante for that -- nothing worse than the guilt of putting the columnist's curse on an undeserving club or individual already striving against the odds.

However, even the Frogs' great leap forward shouldn't distract from a wonderful and remarkable story that wrote its latest chapter at Camp Nou. The first sign that Sevilla's Javi Varas was going to save Lionel Messi's penalty, shock the football world and win his gritty teammates an extraordinarily hard-fought point against Barcelona came just before the fuss between Freddie Kanoute and Cesc Fabregas, which eventually saw the Mali striker red-carded.

The 29-year-old keeper ordered the two quickest players in the Sevilla team, Fernando Navarro and Javi Navas, to stand to the right of Messi as he approached the penalty spot. The reason? Varas had spent much of the previous week studying Messi's penalty-taking technique. The stats are that the little Argentine genius had taken 21 penalties for Barca before Saturday night, scoring 17 of them. The last two he missed went to the keeper's left hand -- one saved, one over the bar -- the previous two to the keeper's right.

What Varas no doubt spotted is that recently Messi has chosen to look to the keeper's right but then send the ball to his left. 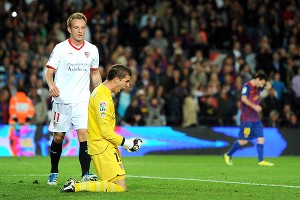 So the Sevilla keeper knew he was going to commit to diving left, that any potential rebound would go to Messi's right-hand side, and thus he asked the two speediest guys in his team to be prepared to sprint into that area in order to sweep up danger.

Now that is being organized.

I found no end of little ironic twists in what happened.

For starters, Camp Nou is the home of the man who is most fanatically devoted to the benefits of studying opponents on video before a match. Pep Guardiola even has a little office deep in the basement of the grand old stadium that no one else is allowed to enter, where he has banks of DVDs on rival teams and players, a DVD player and pictures of his family. It's a zone in which he thinks he sometimes finds the "magic" of football, when endless hard work yields sudden inspiration and clarity about how to win.

Varas is evidently similarly minded, and he came out on top in the battle of the DVD preparation.

Equally interesting was that the Sevilla keeper produced his famous save with his two major heroes there to appreciate him -- one in each dugout. Juan Carlos Unzue is Pep Guardiola's goalkeeper trainer and was once the reserve keeper at Camp Nou in the era when Johan Cruyff was coach. But he signed for Sevilla, where Varas was born, playing for seven years with the club to which Varas has been fanatically devoted since he was old enough to put one foot in front of the other without falling over.

The other hero was actually the man Varas has relegated to the Sevilla bench. Andres Palop spent seven long years at Valencia CF, having been signed by the club he supports, but only made 43 appearances there, fighting to win his place in an uneven battle against the fiercely competitive Spanish international Santi Canizares. Palop was turning 32 when he left the Mestalla and moved to Sevilla, but bloomed in that remarkable Juande Ramos era, winning six major trophies.

Varas admits that he idolized both men and stuck at his career because he dreamed of emulating them. But his heroic status Saturday (plus the fact that he's been extremely well-regarded by the Sevilla fans since ousting Palop last season) is supported by one weird backstory.

Although he was spotted by his mentor at Sevilla, Pablo Blanco, when he was 11, Varas didn't make his competitive debut for the first team until close to his 27th birthday. (Coincidentally, his second La Liga match was at Camp Nou in 2009, and he had to pick the ball out of the net four times. What sweet revenge this past weekend was.)

Although he was called back to be Sevilla's third-choice keeper when he was approaching his 26th birthday, Varas thought he was headed for a dead end. "I simply wasn't earning a living from professional football," he said. "Quitting altogether and moving into an ordinary job to earn a living was partly financial but partly because I'd lost a great deal of the pride in what I was doing."

Word got out among the players that this popular, hard-working and evidently talented but slightly timid lad was thinking of hanging up his boots because he was running out of determination and enthusiasm.

It's his great fortune that the technical secretary at Sevilla took him aside and gave him a firm talking-to. "He told me that being Sevilla keeper was a difficult task and that I shouldn't give up without making sure that I'd given it one last serious push to see if I could achieve it," Varas said. "That plus the encouragement of my girlfriend convinced me to give it one last shot."

Varas' total of competitive matches for Sevilla's first team only exceeds his years on this planet by nine, but the new contract that he signed this month indicates that the club believes he is its No. 1 for a long time to come -- and he's finally making good money.

Messi's penalty is not the only important effort Varas has pushed away these last few weeks. He first knew of the new contract offer last month and his agent phoned to tell him that the length of the contract was fine and that the initial offer of 1 million euros per year was only a starting figure that any good representative would hope to negotiate upwards.

After Varas heard the news, he and his wife discussed the offer over a glass of beer at the local bar. Twenty minutes later, he was back on the phone telling his agent to accept the deal without any haggling. Varas didn't think it would serve him any purpose to thrash around for a few more dollars when his life was finally good.

If there is a bit of ill fortune to go with Varas' emergence as a world-class keeper, it's that he will still struggle to get a chance to play for Spain. His form has been so exceptional, his confidence so electric that, in normal circumstances, he'd be a contender for a squad appearance with the national team. But of course because he is such a late bloomer all the representative squads below the senior one are out of his reach, and head coach Vicente Del Bosque is currently blessed with Iker Casillas, Pepe Reina, Victor Valdes and backups such as David De Gea who, at 20, has the U-17 and U-21 European championship winner's medals, plus the UEFA Europa League, UEFA Supercup and Community Shield with his new club, Manchester United.

I guess Varas will live with that misfortune, for the moment. Who knows? The way his life goes we might see him debuting for Spain in another 10 years.

Perseverance, perspiration and the perspicacity to study penalties on DVD have helped place Javi Varas in the spotlight of the world's football fans this week. But what I find most heartening of all is that the fella has real, natural talent, and instead of pushing paper clips and sending girders to Granada he's proving to us -- and, most importantly, to himself -- that keeping the faith in himself was a great choice.

What's the opposite of clouds with silver linings?

A gloomy postscript is that the man Varas has usurped, Andres Palop, is one of the most characterful, interesting and friendly guys in Spanish football.

Father Time waits for no one, and Palop always knew that delaying his move from Valencia to find first-team status at Sevilla meant that the glory years, when they came, would be brief. But just over a year ago, he admitted to a Spanish newspaper that he's living in fear.

Palop said: "I feel a sense of panic at the idea of retiring. A couple of weeks ago I saw our old captain Javi Navarro, who lost two years to injury, then had to retire last season because of his problems. We were up playing at Deportivo La Coruna and Javi actually traveled up as a fan. Seeing him depressed me. Then in training a few days later I took a real bang on the knee during training and it all flashed through my head. It was like being shot. The fear that just one bad, unlucky moment might take football away from me forever made me feel dizzy and sick. I had this mental image of me out in the middle of our pitch, on crutches, announcing the end of my career to the fans. It was terrible. The fear was so great that I determined to try and enjoy every second from now on, even if that's hard for me."

I'm only pointing out an eternal truth here -- careers end. However, Palop has a problem to deal with there. Words like "fear," "panic" and "depression" from an old soldier coming to the end of his shift are always to be taken seriously by those around him. Palop deserves a golden retirement and will, I'm certain, crop up in a successful media analyst or coaching role.

But now that Varas has tested the No. 1 jersey and liked the fit, it's time for Palop to do some serious thinking about what comes next, and when.

He's too good a man to shrivel into gloom, depression and that nagging, debilitating voice that sooner or later asks all of us "Where did all the good times go?"