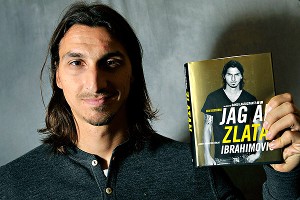 Janerik Henriksson/AFP/Getty ImagesIbrahimovic keeps losing his internal battle between common sense and a sense of injustice.

It is hard to imagine that Maxi Allegri is enraptured with Zlatan Ibrahimovic's insatiable thirst for infamy just at the moment, but whether the AC Milan coach actually dares to point that out to his volatile Swedish striker is quite another thing.

Perhaps you are aware that the former Barcelona player has launched his autobiography over the past fortnight with support interviews in the Swedish and Italian press. In fact, had I phrased the introduction differently and asked you to guess which footballer recently revealed that he has been a bicycle thief, loves people who drive through red lights, threatened to punch his manager in the face, is still bitching about a teammate (Freddie Ljungberg) seven years after taking offense at him, and went to a hotel to indulge himself with his PlayStation instead of being with his wife at the hospital while his baby son had a painful operation, you would have guessed Zlatan Ibrahimovic, wouldn't you?

And although Ibrahimovic also reveals that his father was a drunk, his mother beat him with a wooden kitchen ladle and his sister was a drug addict, I wouldn't wager that Allegri is full of compassion and understanding for the Swede.

You see, for all those revelations, his 100,000-copy selling book is one more example of the internal battle between common sense and sense of injustice which Ibrahimovic keeps on losing.

The most explosive and publicity-fueling revelations in the book, "I, Zlatan," revolve around his coruscating complaints and criticisms of Barcelona manager Pep Guardiola, despite the fact that Milan and Barca face off next week.

If any of you are parents and can close your eyes and recall those nights when your toddler didn't want to be in the cot and just wailed, ceaselessly, about the injustice of it all, then just imagine that "I, Zlatan" is the printed version of that long, endless self-pity. You'll save a few krona that way.

That the autobiography is written by a 30-year-old who is within touching distance of an age and stage in his career when he could release the book and tell just as many, perhaps more, truths to an eager audience -- instead of doing so now when he is, theoretically, still at the peak of his powers -- is self-indulgence. That his howl-at-the-moon rant at Guardiola is center stage when Barca is imminently due at the San Siro to do battle with AC Milan for top spot in their Champions League group is unforgivable. 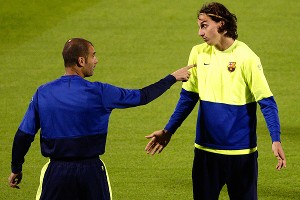 AP Photo/Bernat ArmangueIbrahimovic launches a scathing attack on Pep Guardiola, even though the Swede knew full well what he was getting himself into at Barcelona.

Perhaps Milan will be good enough to beat Guardiola's team irrespective of all this distraction. If it does that and Zlatan plays well, then hats off to them.

But across the history of sport, the idea of offering dangerous opponents verbal fuel to light their fire ahead of a big battle is ill-advised.

If a top sportsman wants to set the record straight, slay a few dragons, raise a few laughs, then fine. When better to do it than just before or immediately after retirement? But not now.

No matter how Ibrahimovic denies it, the timing is also potentially dreadful for the player himself.

If you examine his record, you'll discover that in Netherlands, Italy, Spain and then Italy again, his team (Ajax, Juventus, Inter Milan, Barcelona, AC Milan) has finished top of its championship every single season since May 2003. That's absolutely remarkable. When he won the title with Inter, it was the first time it came top of Serie A in 18 years, and with AC Milan last season the title victory was its first Scudetto for seven years.

What I mean about potentially dreadful timing for Ibra is that the Champions League is his Achilles' heel. Or at least it's one of them. Right before he arrived at Barca, the club won it. As soon as he left Inter, in 2009, the Italian side lifted the European Cup. (When he was with Inter, he was a formidable part of the team dominating Italy once again, but in Europe Inter was flaccid.) While on loan at AC Milan during the 2010-11 season, his parent club, Barca, won the Champions League again, then sent Ibrahimovic permanently packing for AC Milan.

Now I'm not arguing that Milan is the raging favorite to win the Champions League this season. But I do say, firmly, that winning the group is an advantage in terms of which team it'll face in the first knockout round. It's also clear that this is a good time to catch Barca, which is only intermittently good at the moment. Many of Guardiola's players will just be getting their 10,000-mile round trip to Costa Rica with Spain out of their systems.

Milan is an interesting dark horse for the Champions League. No better. So 100 percent of the Swede's attention should be focused on winning this game, the group and then regrouping in the spring to win the damn thing. But take a look at what Ibrahimovic has said about Guardiola and his experiences at Barca and judge for yourself whether there is now an increased chance that the European champion will be there with a raging passion to put him in his place.

Ibrahimovic reveals that, in a fit of pique, he accused Guardiola of being "emasculated" and of "s----ing himself" when faced with Jose Mourinho. When Guardiola told Ibrahimovic to work harder, the player bristled. "I'm a guy of 92kg," he wrote in his book. "I haven't got the physique of someone who can work back and then sprint up front again throughout a match! If this is what you want, then you've got a Ferrari and you are using it like a Fiat! I'd rather be on the bench than play."

Then Ibrahimovic was surprised when he was dropped from the starting lineup.

Flailing this way and that, spitting venom, the man-child continues. "When I arrived at Barcelona I was following a dream, but I now realize sometimes it's better to be content with what you have rather than follow a dream which nearly kills you. When I arrived, I was forced to kiss the badge on the shirt even though I didn't want to. They made me do it. They kept [telling me] 'Kiss it, kiss it ... Usually I like to be my own man but I was just so emotional about playing for the great Barcelona. However, I found that they wanted me to be like [Lionel] Messi, Xavi or [Andres] Iniesta who sat there like schoolboys who obeyed every command without question. I am a guy who likes those who drive through red lights.

"Guardiola told me that everyone kept their 'feet on the ground' at Barca," Ibrahimovic added. "I wasn't to arrive at training in a Ferrari or a Porsche. Who was he to tell me what I could drive?"

Does Zlatan see the irony that he goes on to admit that "I always drive like a madman -- I got up to 325 kmph [202 mph], leaving the police behind once. I've done so many silly things I daren't think about now."

When his last-minute transfer to Milan was in the balance, Ibrahimovic took one Camp Nou vice president aside and warned: "If you make me stay I'll wait till I'm together with the coach in front of the media and then I'll punch him ... I'll do it, I will!"

But fairness demands a minor shade of grey. At Barcelona, Ibrahimovic won four trophies, scoring 21 goals with nine assists. This season already he has nine goals in 11 appearances, scored at Roma, at home to Lazio, in the Italian Super Cup defeat of Inter Milan, and in the past three Champions League matches. Ibrahimovic performs. But not to Guardiola's exacting standards.

And this is where the intensity of my irritation and disappointment with Ibrahimovic goes up. When I interviewed him at Barcelona, not only was he charming and intelligent, but he was also absolutely evidently delighted that he had got himself there. He told me, "Barca produces football which the world will love to play in 2015 and 2020 -- they show the future. You used to hear the argument that, yes, this football is technical but is it concrete enough, is it winning football? I know that some people even thought, 'You won't get anywhere playing this pretty football.'

"But Barca showed the opposite," Ibrahimovic continued. "My aim here is to become better than I already am -- to become the complete footballer. I want to keep collecting trophies. I'll improve both what I'm good at and what I'm less good at. The secret to that is to train hard every day and to learn new things. However, I don't think it's easy to come here and have success from day one. You have to adapt very well and learn the system. I saw many great players come here, but they didn't all connect with what's demanded here."

So my argument is that he knew. Ibrahimovic knew that Guardiola had built a strict system on and off the pitch. He knew that things revolved around Messi. He knew that Barca's success is fundamentally pressed on intelligent movement -- with the ball, off the ball and in pressing to regain the ball. He knew that team harmony was valued about 2 million light years above self-expression. Above all, he knew the impetus was on him to adapt and learn. Not vice versa.

Instead of working, he started walking. Instead of obeying the rules, he went snow jet-skiing in the winter break. Instead of fitting in with the daily discipline, he trotted out late to training. Last by a distance.

By his own definition, Barca was his big chance. He blew it. It was his fault.

So now it's on to the Champions League next week. The last time Milan and Barca met, Ibrahimovic was out injured, but Milan grabbed a late 2-2 draw at Camp Nou. Let's hope he does himself justice next week at the San Siro. Let's hope he really puts the European champion to the test.

For all his inbred immaturity, self-justification and volatility, Ibrahimovic is a bright, talented, successful footballer. If he has revenge to take on the Spaniards, then let it be with a football rather than with a "me, me, me" autobiography.