MADRID -- For all that this was a classic Clasico, the most pure-blooded of Spanish football matches, it put me in mind of that golden era of boxing when Muhammad Ali and the late, great Joe Frazier were going after each other. Frazier was a stunning competitor at his peak -- power and aggression and an infernal need to win. Ali was the stylist -- quick of mind and paw and feet and tongue.

Of course, it got personal. And I swear that as well as driving Frazier mad with rage, Ali's taunting of his rival, whom he secretly both feared and respected, reached a stage where he threatened to "whop" Smokin' Joe with one hand tied behind his back.

The Barca versus Real Madrid rivalry has always been that charged, that electric, that animated. But right now, Pep Guardiola's team is Ali and Madrid, Frazier.

Whether Barca resolved to fight with one hand behind their back by conceding a comedy goal (comic unless you are Victor Valdes or Guardiola) within seconds of the kickoff as the Bernabeu bayed for Catalan blood and payback for the 5-0 that Los Merengues had to suffer last year, we might never know. But to then soak up the pressure, utterly turn the tide, score three goals and threaten three or four more might just be more satisfying for Guardiola and his men than winning 5-0 at their will last November.

Make no mistake about it. This could have been 6-2 or 7-2. Had the Spanish and European champions added goals from Andres Iniesta, Xavi or David Villa, there would have been no ground for complaint from their enemies. 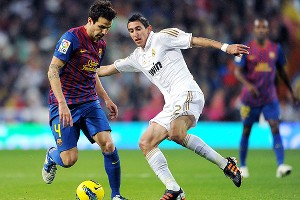 If you will permit me to change the metaphor from boxing to the movies, Barca, at least for Madrid, are like the villain the good guy has just about shaken off. We know there are only six or seven minutes left in the movie, but the director is telling us with his camera that the bad guy isn't really dead, just hiding behind the door, and that there are at least four more minutes of fight scenes left. Think Glenn Close, "Fatal Attraction," the bath, the knife and Anne Archer. Whenever Madrid thinks it has Barca on the ropes, it is wrong and its audience is screaming, "They aren't dead yet, deal with them, deal with them!"

Up one-nil here Saturday but still slaughtered. Up one-nil in the game that ended 6-2 in Barca's favor during Guardiola's first, glorious, season in charge. A one-nil victory in the Cup final this past April but beaten 2-0 at home in the Champions League semifinal a week later. Madrid simply can't produce a knockout blow.

When Xavi strolled off the pitch Saturday night, and he'd have had every right to have been smoking a cigar, he stopped to point out that "despite our early mistake, which was our fault, we were totally superior to them in all areas of the pitch. This was a fantastic performance by the lads."

Madrid, quite correctly, has sussed that if you can press Barcelona adequately, which means harassing Guardiola's players when they try to move the ball in areas where they are vulnerable, it's possible to hustle the Emperors right out of their groove.

Pressing was the key to Valdes' early mistake that allowed Angel Di Maria to have the ball delivered right to his feet and then for Karim Benzema to benefit from the deflected shot to score at 23 seconds, the fastest goal in the history of the Clasico.

During the minutes when Barcelona passed its way back into contention, Madrid attempted to make Valdes repeat his error, tried to test whether Gerard Pique and Carles Puyol are fully fit and sharp. And above all, Jose Mourinho's men tried to catch Xavi taking a little more time on the ball than he should.

Twice in recent Clasicos, Real Madrid has done that to Xavi and earned a goal -- in the Liga 1-all draw in April and the Champions League semifinal second leg in May. 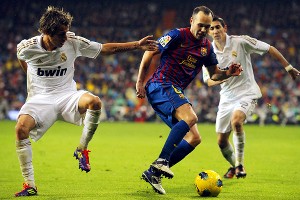 Pierre-Philippe Marcou 111210Andres Iniesta had another extraordinary game for Barcelona.

But pressing is an art. Some in Madrid's squad are fit enough for it but not bright enough for it. It's a high-wire act. Anyone can stand on the tightrope, balance with the pole and bend his feet around the taut metal rope. But can you make it to the other side without falling down once you've made it half way? Can you resist the urge to look down? In terms of pressing, these were the tests Madrid failed.

Barcelona's clever players found space, passed, tugged the white shirts around into bad spaces and then, as Ali was wont to do when a slugger was tired, just picked them off -- which can be brutal in its own pretty way.

Lionel Messi, of course. Six goals and four assists in the previous seven Clasicos coming into this game, he produced a fifth assist by picking the ball up in his own half, sprinting away from Mesut Ozil, and dancing between Lass Diarra and Xabi Alonso before releasing a pass, just in time, to set Alexis Sanchez up for the vital equalizer.

Messi is the touchstone for the Barcelona players. If he is confident and quick and happy in his work, they genuinely don't believe they can lose. He turned the tide; he is dangerous enough for Mourinho and his performing puppets to jump up and demand a second yellow for a tackle that was barely a foul when, again, both Sergio Ramos and Pepe did very well to stay on for single tackles that some referees would have judged as straight reds.

It didn't really appear as if a new page was being turned before the match. Mourinho waited patiently at the mouth of the tunnel for a decent while after the teams were out so he could shake hands with Guardiola and assistant coach Tito Vilanova. Eventually he did press the flesh with the Barca coach but, for a moment, it looked like Guardiola was simply leaving his old foe hanging.

Kudos to Mourinho for going back to the bench and warmly shaking Vilanova's hand. The horrible incident in which he poked at Vilanova's eye in the Super Cup second leg needed to be put aside so the return to health from a delicate operation on the Barcelona assistant coach's saliva gland could be celebrated. Hats off to the "Special One" for that.

But Mourinho was undone, again, by his rival. Although it took time, Guardiola's option for extra bodies in midfield and his odd idea that Cesc Fabregas should play on the wing actually paid off. It was not an out-and-out success, but Fabregas' back-post header for 3-1 is what history will recall.

Prior to that, Barca's evident domination of the ball, better positional sense around the pitch and confidence in each other had brought a deflected goal for Xavi to make it 2-1. But, frankly, immediately after Alexis made it 1-all, there looked to be only one winner.

Now Barcelona heads for Japan and the chance to become world champions at FIFA Club World Cup once again, probably against Santos in a tantalizing final.

Madrid heads for the drawing board. There is nothing wrong with its playing style; there is nothing wrong with the sharpness and ability of some of its players. However, there are flaws, and there are some who rely on force rather than brains and technique. Until they learn to play at Barcelona's level without resorting to brute force, they will be unable to consistently get the better of this superb footballing outfit.