Yellow Submarine on verge of sinking

Can you believe that it is 46 years since Paul McCartney wrote "Yellow Submarine" for Ringo Starr to sing as one of the drummer's few enduring Beatles songs?

For all its simplicity, for all the nonsense verse and despite McCartney basically paying homage to children's songs, it has survived as one of the most loved tracks the Fab Four ever recorded -- still known and sung all over the world nearly half a century later.

As was typical in those days, recording any special effects was a product of how fertile your imagination was, how many risks you were prepared to take and how many of your friends were all aboard.

Over the years Paul, John and George, in particular, have explained how parts of the song were created: the sound of the Yellow Submarine going under the waves was caused by John blowing through a straw into a pan of water; Ringo achieved the submarine voice in such lines as "Full steam ahead, Mr. Captain" and "Cut the cable" simply by stepping outside the door of the sound studio to shout through the muffling.

The Beatles and pals raided the Abbey Road sound effects cupboard for whistles, glasses, horns, chains and such while the final chorus took place with their former roadie, Mal Evans, leading people such as Marianne Faithfull, the Stones' Brian Jones, Patty "Layla" Harrison and the Fab Four around the room in a hand-to-hip conga procession while he banged a big bass drum. 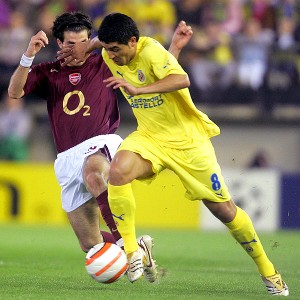 Jose Jordan/AFP/Getty ImagesJuan Roman Riquelme guided Villarreal to the semifinals of the Champions League in 2005-06, before falling to Arsenal.

The result was a classic product, from cheap and cheerful resources.

One of the many ways in which the tune has retained its profile and popularity in recent years has been the rise of Spain's Yellow Submarine -- the adopted nickname for the Villarreal Club de Fútbol.

Since the club torpedoed its way into the Primera Division at the turn of the century, Villarreal's achievements have been notable, but above all, I think, its playing style has been sensational.

Whether under Victor Muñoz, Benito Floro, Manuel Pellegrini, Ernesto Valverde or Juan Carlos Garrido, you knew what kind of football you were going to enjoy if you went to the neat, compact El Madrigal stadium. In almost a decade of visits, I've never once seen a dull game.

During its fairytale years, this club from a town which only had 42,000 inhabitants when Villarreal last won promotion (but interestingly has added another 10,000 citizens since the Yellow Submarine and its president became mega successful) has reached the semifinals in three UEFA competitions (twice in the UEFA Cup or UEFA Europa League and once in the Champions League), plus two more quarterfinal appearances along with a win in the now defunct Intertoto Cup.

The modern relevance of how the Beatles recorded this club's theme tune? Mend and make do. Use resources to the maximum with the minimum outlay. Make a big noise with cheap instruments. Take your pick of which you think best applies; the team has succeeded through limited means.

Why? Well, it has been an intensely gloomy Christmas in this normally happy-go-lucky part of Spain's eastern Mediterranean coast.

Currently sitting fourth bottom in La Liga's table and one bad result off second bottom, Villarreal was knocked out of the Copa del Rey by third division minnow Deportivo Mirandes just before the winter break. Garrido put out an absolutely top drawer starting XI -- no way was he taking this less than seriously -- but his side lost 2-0 at home. Garrido was sacked. 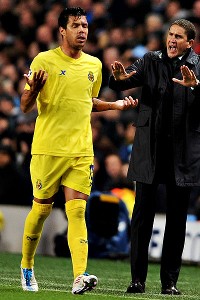 Not only did Villarreal finish bottom and winless in its Champions League group this campaign, the club kissed goodbye a lot of cash in doing so. A reasonable performance might have been two wins, a draw and three defeats, which would have earned it a minimum 9.2 million pounds. Instead, simply being present in the group, without win or draw bonuses, will give it around 7 million pounds.

That news is set in stark relief with Villarreal posting around 16'06 million pounds in losses (effectively having spent 100 million pounds and earning 84 million pounds last season), which for a club and a community of this size is, if not a catastrophe, certainly a set of figures in which the apostrophe could do with being further to the left.

Remember that Garrido delivered Villarreal fourth position in La Liga last season and took his team to within touching distance of the UEFA Europa League final. These figures are an indication that next year's AGM will report far greater losses unless there is a significant, successful and debilitating sale of assets this summer.

One central pillar of what has gone wrong, the world economy set to one side, is how Villarreal signs players and what value it receives from those purchases.

In the side which crashed out of the cup just before Christmas were two players, Jonathan De Guzman and Cristian Zapata, for whom the club paid around 15 million pounds.

That happened at a time when Villarreal, mostly out of necessity, sold the magnificent Santi Cazorla to Malaga for 21 million pounds. Neither De Guzman nor Zapata has yet looked anything like worth the expenditure on him, although the Canadian will come good, I'm sure, which means that Villarreal only made a net gain of 6 million pounds for selling a crucial footballer in exchange for two men who have been part of this horrendous slide since summer.

That was not the trademark of the old Yellow Submarine.

While wages were good, the club consistently picked up players who were either on the rebound -- such as Diego Forlan, Riquelme and Rossi -- and returned them to top working order, or picked up very cheap, sometimes cost-free signings -- Joan Capdevila (free), Robert Pires (free), Cazorla (via youth development) and Tacchinardi (loan).

There are parallels with Sevilla. In his day, the Andalucian's director of football, Monchi, seemed to have an absolutely golden touch -- Dani Alves, Luis Fabiano, Seydou Keita, Julio Baptista and Freddie Kanouté. It has become slightly more copper or nickel in recent seasons. 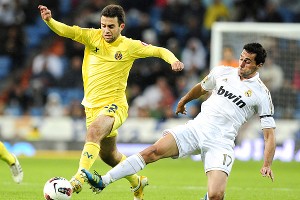 Javier Soriano/Getty ImagesInjury to Giuseppe Rossi has not helped Villarreal's fortunes in the 2011-12 campaign.

José Manuel Llaneza, now club vice president, has been the Yellow Submarine's most successful diviner of transfer market talent during the years of ascendency -- but he, too, now appears less clear of eye in the transfer market. Fewer loans, fewer free transfers, higher fees, fewer returns (football or financial).

Yes I know, a town this size has been punching above its weight and football has always been cyclical.

The law of survival of the fittest applies in this jungle, too.

What I wish for, in this bright new year, is not special dispensation for Villarreal but for a revival.

Its youth system is notoriously well run, well funded and designed to fuel the club from within -- it is the way forward for football in a financial crisis, and I'd love the senior side of the club to survive long enough for it to be proven whether the youth academy can or cannot blossom and flower.

President Fernando Roig's wealth has thrived on industries that are now badly feeling the pinch because of the economic crisis.

Villarreal urgently needs to return to the days when it spotted a player far in advance of other clubs, signed him cheaply or for no cost, convinced him of the joys of living in this sunny climate by the Mediterranean and thrived when that player found new levels of excellence within himself.

Like the Beatles, it's time to reach out for cheap instruments but still make a likeable noise.

The new coach is José Molina, who as a keeper lived through a similar fairytale story at SuperDepo (the Deportivo La Coruna side in Galicia, Spain, that achieved both Spanish and European glory in the early part of the new millennium) and who has successfully fought cancer.

What style of football he adopts will be interesting, but there is a culture at Villarreal -- embraced by directors and fans alike. Vivacious, swashbuckling, technical and talented.

I don't want to lose that; I don't want to say goodbye to this friendly, famous and fun club, which if it is relegated may not nose to the surface again.

May 2012 bring the Yellow Submarine new engines, a successful captain and new, exciting journeys into the Sea of Green.

"As we live a life of ease
Every one of us, has all we need.
Sky of Blue and Sea of Green.
In our Yellow Submarine."