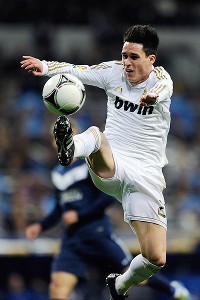 As 2012 dawns and you seek a fresh injection of La Liga on ESPN, I suspect that tick-borne encephalitis was not the first thing that came to mind.

Wind back to the last European championship in 2008, however, and it was a major point of concern for the Spanish national team at its base in Austrian Stubai, forest country at the foot of some splendid mountains and within sight of a year-round glacier. Ticks, we were told, were prevalent in the Stubai summer, and a nasty encounter with them could lead anywhere from headaches through myalgia and aseptic meningitis to, by definition, encephalitis. The majority of Luis Aragones' squad had been vaccinated the requisite number of weeks in advance but the coach vacillated so long over his last two or three picks that Santi Cazorla, Ruben de la Red and Sergio Garcia went to Austria without being inoculated (just like me).

Cazorla and Garcia, particularly, were "joker" cards in the squad -- both talented but significantly unproven and unexpected by many in Spain. Yet Aragones went with form and momentum, not tradition.

Did the joker cards strengthen the hand of the Wise Man of Hortaleza? Yes.

De la Red played once and scored. Garcia played once and set up the winning goal. Cazorla -- who was so utterly overwhelmed with joy to be involved that he blushed every time the media talked to him -- actually played five times, consistently appearing when games were stretched or the opponents were tired to add width and verticality, and he was hugely valuable to Spain in terms of seeing out games or maintaining winning scorelines.

In short: a triumph.

Another joker, Cesc Fabregas, contributed an enormous amount to Spain's Euro victory. While he had briefly featured in the 2006 World Cup, Fabregas was largely a bench player in 2008 -- but what an impact. Six matches, one goal, three goal assists. And as I've commented previously, he also started the final as second striker behind Fernando Torres in place of the injured David Villa.

Looking ahead, there are parallels to this summer's tournament. The world champions have a squad that has aged and been flogged hard, physically, over the past four years, leaving several key players either injured or out of form. 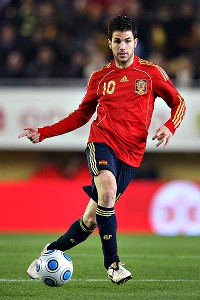 Jasper Juinen/Getty ImagesCesc Fabregas was mostly a bench player at Euro 2008, but what an impact: six matches, one goal and three assists.

Irrespective of whether Torres and Villa rescue themselves in time, there will be other players who get injured, lose form and, you can be sure, there will be one or perhaps two "joker" picks from Vicente del Bosque. He's more conservative than Aragones, but his use of Fabregas -- and how he integrates Jose Enrique, Jordi Alba, Roberto Soldado, Isaac Cuenca and, perhaps most interestingly, Jose Callejon -- will go some way toward answering whether Spain can become the first country ever to win three straight majors.

To some degree, Callejon (with eight goals in 14 appearances for Real Madrid in all competitions this season) reminds me of Cazorla and Garcia. Not an identical player, but capable of playing wide or cutting in and using space down the middle with intelligence, pacy, full of bravura and with a goal in him.

Think about the career of this emerging Madrid starlet to date. Just before Spain won Euro 2008, he received the standard rejection, having starred in Real Madrid's cantera (youth system) -- sold for peanuts to Espanyol.

But Callejon thrived in Catalonia, matured in a football sense and was bought back in the summer for just over 5 million euros. Yet despite being consigned to an impact sub role, the 24-year-old has been convinced by Jose Mourinho's promises of "jam tomorrow" (the idea that he'll be rewarded with game time if his training is first-rate and his impact is high when he's given the chance). Having to be a squad player, after having been a first pick at Espanyol, could have brought on a fit of the sulks. Nothing like it though. And you can credit Mourinho -- who talked over the Christmas break about how "football is human science" and the "most important thing is man-management" -- for keeping Callejon motivated.

With six goals in his past four games, Callejon is beginning to contest for a regular starting place, and his ability to show good technique at pace is like finding a cold beer in the desert for both Madrid and Spain.

Last season for Espanyol, around this time of year, what I liked was how he adapted from an out-and-out winger to become the No. 9 -- in a 4-5-1 formation at that -- when Pablo Osvaldo (a big bear of a striker) was injured. Despite the difficulty normally associated with such a positional shift, Callejon showed lots of smarts and bravery, and thrived with responsibility on his shoulders.

OK, so it's a long, long way between today and spending June in Poland and Ukraine for Callejon. But there is a scenario in which Spain might be crying out for just his type in May, when del Bosque will be putting the finishing touches to his squad. And the news on Soldado, a favorite in this column in recent months, is good -- giving Callejon at least incentive, if not actual hope.

Del Bosque has confirmed that "perhaps" the Valencia striker should already have been given a chance to impress during the games against England and in Costa Rica (although Soldado might, if he's shrewd, be thanking his lucky stars that he wasn't), and that "soon" he'll be invited to train and play with La Roja -- partly because his goal-scoring form is irresistible, and partly because that of his competitors isn't.

The Spain coach, loyal though he is, also hinted that unless Torres is playing regularly and begins to score, it will be "difficult" for him to make it to the summer tournament. That situation would be drastic, and I still don't see it happening. But the warning is on the table.

Meanwhile, if there is something to sustain del Bosque, it is Fabregas. There is no getting round the fact that, among his many talents, major tournaments make him come alive. On signing for Arsenal, he'd just led Spain all the way to the final of the FIFA U-17 World Championship, finishing as the top scorer and best player. When he came on during World Cup 2006, I recall Diego Maradona raving about his skills and maturity. I've laid down his fundamental role while winning Euro 2008, and while his use was sparing in the last World Cup, he did assist on the winning goal because, as ever, he was mentally and physically ready.

Above anyone else, Fabregas embodies Spain's trophy era. Others have taken center stage, but his mix of technique, aggression, power, goals, team spirit, positional adaptability and, above all, robust mentality, represents the difference between Spain, the perpetual pretty boy, and Spain, the guy who gets the girl.

Since joining Barcelona, Fabregas' tendency to provide important service has increased. He has eight goals in 12 La Liga starts (including a crucial one in a victory at Real Madrid), plus goals in the Champions League, the European Supercup final and the Club World Cup final. All told, in barely half a year at Camp Nou, the ex-Gunner has three trophies, major contributions in two of those finals and a vital goal at the Bernabeu. I imagine that del Bosque sighs with pleasure every time he thinks of Francesc Fabregas -- a man for all seasons.

Seeing which of the jokers in the pack can help Spain, Fabregas and del Bosque rake in the chips on the green baize this summer will be an interesting study over the coming months.

When Lionel Messi raises the Ballon D'Or trophy to an adoring crowd in the Kongresshaus Zurich on Monday he will become the only man, other than Michel Platini, to win the award three consecutive times. Not only that, but Leo will become the only man ever to win three consecutive FIFA World Player awards (it's combined with the Ballon D'Or now), and his margin will be all the more comprehensive given that votes come not just from selected football journalists but also from all the national team captains and coaches of the FIFA football family. I think his continued excellence, his personal comportment, his ability to rise to the trophy moment, the speed at which he demonstrates his skills and how many games he racks up are all pushing him toward the top of the all-time list. But that's as far as I'll go, given that he's only 24 and there is much more to come.

But just a thought about how much we need to value where he is given who he is subjugating. Xavi is, in my view, the greatest Spanish footballer ever. He is a serial trophy winner and has matured into a fantastic leader for club and country. Cristiano Ronaldo has scored some utterly unbelievable figure like 111 goals in 112 games for Real Madrid, produces feats of athleticism and power that have rarely been seen and, were it not for Messi, would probably stand unchallenged as the most remarkable footballer of our times. Yet they and everyone else are significantly, and I mean significantly, behind Messi in terms of his utter, divine brilliance. We live in extraordinary football times. Cherish them. 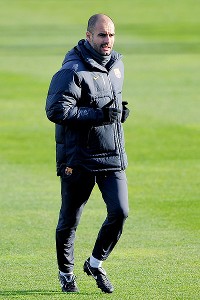 Josep Lago/AFP/Getty ImagesPep Guardiola is expected to announce within the coming few weeks that he's renewing his Barca contract for another year.

Every club has its share of anniversaries and birthdays each month but January is a particularly significant one, especially this year, for FC Barcelona. Pep Guardiola, who is expected to announce within the coming few weeks that he's renewing his Barca contract for another year, turns 41 on Jan. 18. Xavi, the man making Barca tick, turns an ominous 32 seven days later. Guardiola is young for a coach at such a pressurized club, but he's making the task look easier than it should.

Xavi is still vital, fit and fast-thinking, but how will the encroaching years affect him? One birthday is not make-or-break, but it's just a nudge that Father Time is on his way.

And Jan. 5 is the ninth anniversary of Andres Iniesta's home debut (a 3-0 win over Recre). This little maestro -- whom I'd wager is actually Guardiola's favorite footballer, and whom Xavi consistently claims is, pound-for-pound, a more complete player than himself -- is still only 27. But for him, compared to the other two, excellence remains a struggle -- simply because he is plagued by a mixture of serious and niggling injuries. He starts 2012 seeking fitness. How Barcelona and Spain progress in this testing year will very much hinge on how many games they can squeeze out of the unreliable frame of this superb midfielder.