MADRID -- There was so much to like about this Real Madrid display, there was so much to admire about the risks Jose Mourinho took to surprise and distress FC Barcelona, that it would be delightful to do nothing but give them the praise that some of their play deserves.

Facts tell us that Real Madrid is not a smaller or lesser club simply because it is struggling to find ways to beat the best FC Barcelona in history. In fact, there are good judges who believe that Pep Guardiola's side might be the best club side ever. 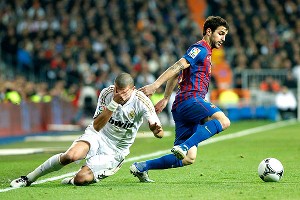 If you happen to be Real Madrid at a time of legitimate Barcelona greatness, or Cristiano Ronaldo when Lionel Messi bestrides the football planet like a god, then … tough luck. But before thanking 99 percent of the players on show in this thrilling Copa del Rey cup tie, a quarterfinal affair that ended 2-1 in Barca's favor, it is time to ask Mourinho, perhaps even plead with him, to realize that playing Pepe in midfield degrades the mighty history of the most famous, most successful club in European history.

Before the match, it was clear that Mourinho -- using the logic that referee Muniz Fernandez allowed Pepe to use legitimate strong-arm tactics in the 1-1 La Liga draw last season in order to blunt Barca -- might well ask the Portuguese to repeat his blunt-force tactics from that match once again. And so long as this seek-and-destroy player stays within the laws, then fine. Let men's football be a man's game, let officials arbitrate what is and is not acceptable force -- don't let us allow our beloved game to become something akin to ballet or basketball.

On Wednesday night, Pepe became Mourinho's midfield enforcer in a 4-3-3 formation, just as he had been three times last season, and for parts of a game in which Los Blancos played with a goal advantage for a considerable time and in which they largely showed smart, confident intent. Pepe was quick, attentive, aggressive within the rules and often laudable. But during the passages of the game when Madrid lost its way, he absolutely, pathetically feigned injury and rolled about as if mortally wounded when barely touched and then took two patently deliberate attempts to stamp on Lionel Messi's hand while the Ballon d'Or winner had been fouled and was on the ground.

The last time these two clubs played an all-or-nothing match here, Pepe was sent off for an awful challenge. This time he came close, so close, to fulfilling his duties … but he couldn't. In pure football terms, he was in the "close, but no cigar" category.

In the ethics of sporting combat, Pepe fell much, much further short.

He received his ninth booking in 11 Clasicos, he was taken off long before the end, he began to play out his own private vengeance agendas and he soured the atmosphere just as he did at Camp Nou last season when several Barcelona players took grave offense at his choice of word and deed.

Real Madrid is a club that resonates magnificence. From top to bottom it has officials, strategists and players who bring dignity and importance to Spanish football. The way in which Mourinho talked about his opposite number, Pep Guardiola, in the build-up to this quarterfinal first leg was respectful and calm. The manner in which the majority of his players performed here at the Bernabeu bore witness to an important team trying to reduce the gap in technique and intelligence between them and a rival of outright magnificence.

But Pepe does not fit that template.

Before the match, all I asked of him, and his manager, was that if Pepe was deployed in the midfield, he played within the laws or, at worst, he pushed them to the stretching point rather than the breaking point.

Instead, Pepe's moral, sporting and personal defeat has begun to symbolize this era in which we live.

Barca won. Again. But given that Guardiola and Muhammad Ali each celebrated their birthdays this week, one calendar day apart, I feel no remorse in drawing from the great man's memory bank in order to try to draw significant conclusions from what we have seen over the past two seasons, and not simply on Wednesday night.

If you are too old, if you are outgunned, if your opponent has a bigger punch, then invent a way to compete. But don't keep losing.

This week, those of us who are too young to have seen Ali in his prime have seen video after video of his dancing feet, his darting fists and his daring rhymes. Only those who were closer to the events of the 1960s and '70s can testify that there was no gap, of any distance at all, between word and deed.

Guardiola, 29 years and one day younger than the King, has managed to tease, torment and dominate Real Madrid and Mourinho like Ali did to those who thought they could stop his floating and his stinging. All that it is fair to ask Los Blancos, in their meetings with Barcelona at least, is that their attempts to close the gap -- to cope with this infernal pest that has arrived to blight the players' lives -- is that they remember their legacy, their history and their identity.

They must not drop their guard. Nor punch below the belt.

Largely, Real Madrid competed in a way that its older supporters, used to an elegance and sensation of superiority, will describe as "expedient."

I think modern times need to mold that description and allow for some merit.

Using a 4-3-3 formation was smart. Playing a three-man attack to press Barcelona's distribution of the ball from the back was largely effective. The rotational duties that were shared by Pepe, Lassana Diarra and Xabi Alonso to ensure that Messi was well-patrolled worked well for large chunks of the game.

We have all learned, during the period since Guardiola took charge in 2008, that not only does Barca have the superior group of players … it reacts better to the major moments.

FC Barcelona has found it absolutely incredibly hard to win away from home this season, but found it simple to carve out a victory here despite going 1-0 down -- again.

Once more Real Madrid managed the first to the best of its ability; it was simply defeated by a better side.

There is absolutely no shame in that.

Once again Los Blancos took the lead here -- as had been the case during the 6-2 home defeat to Barcelona during Guardiola's first season and the Liga Clasico last month. Nothing since May 2008 -- their spending, their talent, their aggression, their expensively hired coach -- has allowed Real Madrid to win in 90 minutes against Barcelona.

Although it seems unlikely, perhaps that might happen next week at Camp Nou.

Good luck to them. But whatever they attempt, whatever differences might be made with Angel di Maria fit and Alvaro Arbeloa free of suspension, there are two key things for those who love Real Madrid to take away from this defeat in which a free header for Carles Puyol and an almost unbelievably rare goal from his defensive partner Eric Abidal ruined their night.

Firstly, when it comes to trying to win by a two-goal margin at Camp Nou to reach the semis, it is important that this historic, regal club eschews the kind of vicious, self-indulgent and self-destructive play that Pepe embodies. The Real Madrid robes are an ill fit on this thug.

Secondly, those who take decisions at this club need to stop, take stock and learn. Barca spends handsomely -- repatriating Gerard Piqué and Cesc Fabregas, buying Alexis Sanchez, messing about with Zlatan Ibrahimovic. Fine. But they are powered by a relentless and well-managed youth system that bears fruit, and they have a squad that not only works around a clear-cut, effective and well-understood playing system, but that has been planted and pruned in order to keep the garden healthy for some time to come.

Whether Madrid does or does not overcome this first-leg deficit -- and most importantly, whether it does or does not win the league title -- it is long overdue that the most important people at the Santiago Bernabeu stop trying to spend their way to success, redraft the basic aims of their football division and, as part of that catharsis, get rid of Pepe and any players of his ilk.