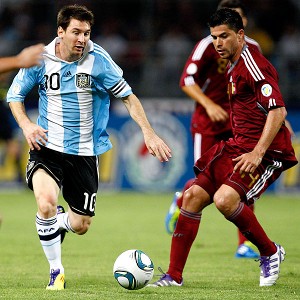 AP Photo/Fernando LlanoVenezuela defeated Argentina for the first time, proving that when it comes to South American qualifying, there are no minnows anymore.

RIO DE JANEIRO -- Just two rounds gone, and of the nine teams in contention only two have yet to win a game. The other seven already have a win to their name, but nobody has two wins.

The figures don't just show it, they shout it. World Cup qualification in South America is more competitive than anywhere else on the planet. True, Brazil is not in the field this time, qualifying automatically as 2014 host. And the continent has retained all of its slots -- the top four go straight through to the World Cup, with the side finishing fifth playing off against opponents from Asia. But even with so many places available, for South America's sides the short trip to Brazil will only come at the end of a long and bumpy road, full of pitfalls, especially away from home.

Of the eight games played in the first two rounds, six went to the home side. Long journeys, a variety of conditions including altitude and heat, the intimidating atmosphere created by the home fans -- all can take their toll on the road team. The high profile victims this past Tuesday were Argentina, Lionel Messi and all, who slumped to a 1-0 defeat visiting Venezuela in Puerto La Cruz.

It was a result that made headlines all over the world. After all, this was history being made. Venezuela had never previously beaten Argentina.

But no one acquainted with the contemporary reality of the South American game should have been particularly surprised. Like Ecuador a few years ago, Venezuela's star has been rising with astonishing speed -- in itself a tribute to the dramatic rise in standards since South America adopted the current marathon format of qualifiers in 1996. Where previously there had been huge gaps between competitive games, suddenly the South Americans had the kind of calendar that European national teams take for granted, with regular qualifying matches, guaranteed income, the chance to keep a team together and to invest in youth development. The less traditional nations have not looked back.

Venezuela's triumph on Tuesday, thoroughly deserved on the balance of play, is the crowning glory of this process. The national team of a nation more associated with baseball and beauty contests was able to overcome an Argentina side that had thrashed Chile 4-1 in Buenos Aires the previous Friday. There are no minnows left in South American football.

Bolivia comes closest to falling within the "minnow" category. It looks like the weakest side in the continent, and is unlikely to pick up many points on its travels. At home, though, it is a different matter. No one relishes the trip to La Paz, 11,811 feet above sea level. It can be torture for un-acclimated opponents; Argentina lost 6-1 there in the previous campaign.

It is for this reason that Colombia can consider itself the big winners of these first two rounds. It was the only team to win on the road, claiming the points when Radamel Falcao Garcia's last kick of the game gave his team a 2-1 victory in Bolivia. 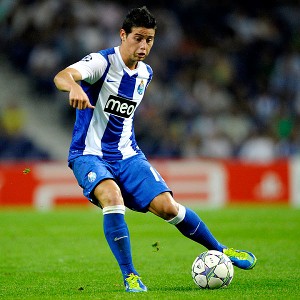 Miguel Riopa/AFP/Getty ImagesJames Rodriguez, who plays his club football at Porto, could help provide the touch of quality to take Colombia to the World Cup for the first time since 1998.

It worked to Colombia's advantage that it sat out the first round. As a result, the team had more time to prepare for La Paz -- and since Colombia's capital, Bogota, is itself at altitude, the trip to La Paz holds fewer fears for Colombia than for most of the other countries. But it had not won there in recent campaigns, when it consistently fell agonizingly short of making the playoff position. Starting out with three points is a real boost, and it had special reason to be delighted with a performance of skill and great maturity on the left of midfield from James Rodriguez. As he matures through the campaign, the hopes are that the Porto youngster could help provide the touch of quality to take Colombia to the World Cup for the first time since 1998.

Another stoppage-time goal prevented Uruguay from becoming the second team to win away from home. A goal up against Paraguay -- Diego Forlan's strike making him the national team's all-time top scorer -- Uruguay was only denied the three points when Richard Ortiz forced in a last gasp equalizer. Even so, after brushing Bolivia aside 4-2 in the opening game, Uruguay top its group, the only team still unbeaten after two matches (both Ecuador and Colombia have played one). The Copa America champion and last year's World Cup semifinalists, Uruguay came straight out for business in the match against Bolivia that kicked off the entire campaign, with Luis Suarez putting them ahead after just three minutes.

It is worth recalling that Uruguay finished the last set of World Cup qualifiers in fifth place, and only booked its slot in South Africa after squeezing past Costa Rica in the playoff. The fact that the Uruguayans have since gone on to hit such heights is an illustration of the strength in depth of contemporary national team football in South America.

And as well as being ultra-competitive, the continent's World Cup qualifiers also have the potential to provide an outstanding spectacle. Twenty seven goals were scored in the opening two rounds, a huge difference from the tight , attritional football the same teams produced just three months ago in the Copa America.

In tournaments, the priority is often avoiding defeat. In a league system, the emphasis is on winning, and the South American sides have switched focus as a consequence. Some of the football played was gloriously open. Those fierce Pacific rivals Chile and Peru came up with a show-stopping classic in Santiago. Chile won 4-2, but Peru hit the woodwork four times in a pulsating 90 minutes -- the kind of game that makes the neutral fan very glad that rounds three and four of World Cup qualifying are only a month away.

Tim Vickery is an English football journalist who has lived in Brazil since 1994 and specializes in South American football.