BUENOS AIRES, Argentina -- Diego Maradona was given the boot as Argentina's soccer coach before he could resign.

His stint as coach of the Albiceleste ended far less successfully than his time as a player with the national team. The Argentine Football Association, which hired the former star in November 2008, said Tuesday that his contract will not be renewed. The decision came 3½ weeks after his team, led by star Lionel Messi, was eliminated from the World Cup with a humiliating 4-0 loss to Germany in the quarterfinals.

"Diego shut himself off to any change," executive committee member Luis Segura said on Argentine television. "Diego has all the right to do what he wants. But so does AFA." 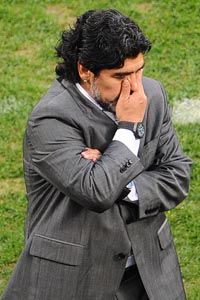 Christopher Simon/AFP/Getty ImagesDiego Maradona is out after 21 months in charge of Argentina's national team.

The federation had offered Maradona a four-year contract through the 2014 World Cup, but Maradona said he would do so only if his entire staff remained.

That was unacceptable to AFA president Julio Grondona. He had asked for several assistants to be replaced, including Maradona's close friend Alejandro Mancuso. The federation said its executive committee unanimously decided to not keep Maradona.

AFA spokesman Ernesto Cherquis Bialo called the decision "very painful" but said there was no way to solve the impasse.

"The president said that there was a significant difference between what AFA wanted to achieve and Maradona's aspirations for the future," Cherquis Bialo said. "There was a wide gap, and it was impossible to narrow it."

The spokesman hinted, however, there might be a role in the future for a man with an unpredictable history.

"This marks the end of a first chapter with Mr. Maradona," Cherquis Bialo said. "The doors to this house, as always, will be open to him."

Youth team manager Sergio Batista was appointed interim coach for the Aug. 11 exhibition at Ireland, which will be followed by a Sept. 7 home exhibition against world champion Spain. Possible permanent successors include two club coaches in Argentina: Alejandro Sabella of Estudiantes and Miguel Russo of Racing.

Asked about the full-time coach, Cherquis Bialo said: "The people who were in the meeting have no name in their imaginations. It has just been announced that the contract with the coach will not be renewed. And so, a new stage begins."

The 49-year-old Maradona became Argentina's coach in November 2008, replacing Alfio Basile and taking over a team he led to the 1986 World Cup title and the 1990 final.

He had little coaching experience, and his team absorbed two of the worst losses in the country's history: a 6-1 rout at Bolivia in World Cup qualifying and the World Cup defeat to Germany.

Argentina attacked with flair in South Africa, with Messi setting up scoring strikes by Gonzalo Higuain and Carlos Tevez. Maradona, dressed on the sideline in a gray suit, was an enthusiastic cheerleader, but that could not compensate for his team's tactical deficiencies. The loss to Germany exposed frailties on defense and lack of midfield speed.

Messi, widely regarded as the game's best player, left the World Cup without scoring a goal. Maradona never explained why Messi -- he was left to roam the field on his own -- wasn't scoring.

Maradona, who has fought cocaine and alcohol addiction, grew up in a Buenos Aires slum, and his escape from poverty has endeared him to many. But he has worn out his welcome in other quarters.

Maradona ruffled the government of President Cristina Fernandez, who twice invited the coach to meet with her. But cabinet chief Anibal Fernandez said Maradona failed to respond or answer the phone, forcing the president's secretaries to leave messages.

Fernandez had been openly supportive of keeping Maradona as coach, and one legislator has proposed building a monument to honor him.

Two weeks ago, the federation offered Maradona the chance to extend his contract. But Maradona put off meeting with Grondona to travel to Venezuela at the invitation of a friend -- President Hugo Chavez.

Maradona's relationship with key individuals in Argentine soccer also was tense. He barred federation leaders and businessmen with commercial ties to the organization from practices in South Africa while allowing reporters to enter.

Still, Maradona had many supporters.

"I want Maradona to stay," Interior Minister Florencio Randazzo said Tuesday in an interview on radio La Red. "We will support his decision. If he leaves we will miss him."

Added team trainer Fernando Signorini: "I have no doubt they didn't want him. Maradona is like a stone in the shoe of power."

In his final act, Maradona selected Argentina's roster for an exhibition against Ireland on Aug. 11.

Messi, Higuain and Javier Mascherano lead the selections, who will be coached by Batista.

Information from The Associated Press contributed to this report.