Behind the scenes with FC Gold Pride 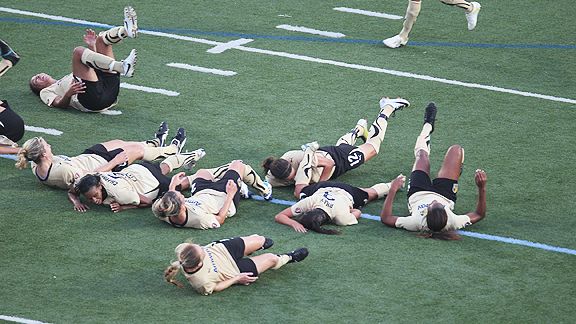 David Silverman/ISI PhotosStee-rike! After scoring a goal against the Boston Breakers, FC Gold Pride's Marta bowled over her teammates with a well-choreographed celebration.

ESPN.com's Jacqueline Purdy spent July 21 with FC Gold Pride in Cambridge, Mass., before and after their mid-week meeting with the Boston Breakers. In addition to hanging around with world-class players such as Marta, Purdy discovered a team that knows how to play hard on and off the field.

Albertin Montoya looked into the stands to see how Boston's fans were reacting to his team's goal and celebration. The head coach of FC Gold Pride, the San Francisco Bay Area's first-place Women's Professional Soccer (WPS) team, had encouraged his squad to celebrate its goals with flair. So after a strike from four-time FIFA Player of the Year Marta put his squad ahead 2-1 near the end of the first half in a July meeting with the Breakers, the players put together an unforgettable celebration.

After curling a brilliant left-footed shot around 2009 WPS Defender of the Year Amy LePeilbet and Boston goalkeeper Alyssa Naeher, Marta ran back up the pitch. The other nine field players assembled into a small bunch near midfield. Marta approached, pulled her left arm back and then pushed it forward, rolling an imaginary bowling ball at the rest of the team, who all promptly dropped to the ground like pins.

Montoya saw that it drew laughs from the 3,052 fans in attendance.

"That was the best goal celebration I've seen in a long time. You see it in the men's game," Montoya said. "It's great for the women's game. We need to make it exciting for the fans. They get a kick out of it."

It all started in the team's second game of the season, when Canadian international Christine Sinclair did the chicken dance after a goal in New Jersey against Sky Blue FC. The team had eaten chicken for every meal of its road trip ("It was the same chicken over and over again with like a different sauce on it," team captain Rachel Buehler said), so the dance was a natural fit. A few weeks later, Sinclair threw a few imaginary knockout punches after her goal in a 3-1 win in Philadelphia over the Independence.

But despite working on a few new celebratory routines in practice, FC Gold Pride hadn't unveiled a new one in a game since.

Their celebrations are about having a good time -- on and off the field. This is a team that clearly enjoys spending time together.

"What you see in the games, is what you see off the field," Marta said through her translator and FC Gold Pride assistant coach, Vilmar Marques. "Every time we have a day off, we're getting together doing things. It's like a family environment."

"At practices, we joke around all day, every day. Little inside jokes that, of course, the coaches don't know, but all the girls are in on it," defender Kandace Wilson said.

For the league's only West Coast team, that's a good thing because the road trips are long and the travel days are tiring. The morning after the win over Boston, FC Gold Pride took a 12-hour bus ride to its next game against the Washington Freedom.

GETTING THE JOB DONE

FC Gold Pride weaved its way through Boston's rush-hour traffic to the game in a bus so small that several hotel guests mistook it for a tour bus. When the team finally arrived at Harvard University, where the Breakers play their home games, Marta looked around for something before finally finding it under a seat -- her cleats, prompting friendly teases from her teammates of "You might need those."

Inside the stadium, the anonymity of the bus was gone. Even a security guard pointed to Marta during warm-ups and asked, "The Brazilian, their No. 10, she's supposed to be the best player in the league, right?" 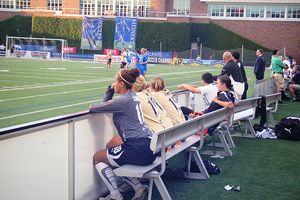 Jacqueline Purdy/ESPN.comFC Gold Pride's bench watches the action during the first half against the Breakers.

The Breakers knew the answer to that question, of course. On the field they brought their best effort to stop Marta & Co. And with Boston coming into the match with three straight come-from-behind wins, FC Gold Pride knew to expect a tough match.

"It's a team that never gives up," Montoya said before the game. "We always have to play from when the whistle blows at the beginning until the end."

Despite relentless second-half pressure from the Breakers, which often saw FC Gold Pride with nearly all 11 players on their defensive half of the field, the score remained tilted, 2-1, toward FC Gold Pride. The team's defense and goalkeeper, Nicole Barnhart, sometimes overlooked in favor of the explosive offense, hung in and came up with key saves and clears when they were needed.

"It was nice to be able to shut down a very dangerous team for that second half," Sinclair, who scored the game-tying goal, said after the game. "It seemed like they had eight forwards playing."

For FC Gold Pride, this season is quite a turnaround from last year. After finishing at the bottom of the standings with a 4-10-6 record in 2009, the team is now in the driver's seat. As of July 29, the Pride are 12-3-1, comfortably in first place. With just eight games left in their season, they've all but clinched first in WPS and an automatic berth to the title game in the league's unique playoff format.

Of course, this is not the same team as last year. Just eight players remain from that squad, while players like Marta (Los Angeles Sol dispersal draft), French international Camille Abily (trade from the Sol) and U.S. midfielder Shannon Boxx (free agent after Saint Louis Athletica folded) were all added. Newcomers Riley and forward Kelley O'Hara are two of the league's top rookies. Combined with last year's key players, such as Sinclair (2009's team-leader in goals), Barnhart, Buehler and forward Tiffeny Milbrett, the Pride have enjoyed near-instant success.

"[It's a] much different team," Milbrett said. "It's a much smoother ride. Not just because we're first, but because of the way the players and the talent of the players is coming together." 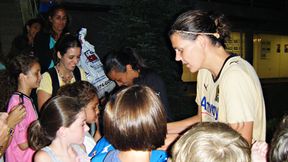 Jacqueline Purdy/ESPN.comMarta and Christine Sinclair sign autographs after the game.

The offensive stats are staggering. Heading into this week's games, Marta and Sinclair have combined to score 21 goals, which matches or exceeds the total goals of five of the league's other six teams. The two make the best forward pairing in the league, and it's hard to come up with a more dominant duo anywhere else in the world -- club or international level.

Abily was a member of the Sol last year with Marta, where the two combined for 18 goals. Now, she is part of the midfield for FC Gold Pride, teaming up with forwards Marta and Sinclair. "They are very complementary. We have the best forwards in the world, I think, together," Abily said. "I just try to give great balls to [the forwards] so they can score."

GETTING THE WORD OUT

After the match, the last three FC Gold Pride players making their way down "Autograph Alley" were Milbrett, Sinclair and Marta -- a combined 248 international goals between them. Sinclair joked with a young fan after he handed her the same item twice and, with some effort, Marta finally convinced a little girl to take a picture with her, rather than just of her.

FC Gold Pride, like all WPS teams, understands the value of connecting with its fans. The league is in only its second year, and players and staff are working every day to bring in new viewers.

"[It's about] getting youth in the area excited about watching the best players in the world," Montoya said. "This is not just another league. It is the best league in the world in women's soccer. The top female players are playing here in the United States."

Boxx, who was a member of the Sol and Athletica before both teams folded, knows the challenges the league is facing.

That, and a well-choreographed goal celebration.

Jacqueline Purdy covers women's soccer for ESPN.com. She also is an editor for ESPNRadio.com. You can reach her at twitter.com/JacquelinePurdy.