CHICAGO -- Saturday's friendly against Poland was a chance for U.S. national team manager Bob Bradley to throw in a few wrinkles in terms of his lineup choices. Like most experiments, some worked out better than others, and the combination of good and bad saw the U.S. settle for a 2-2 tie.

In some cases, the ups and downs could be found in a single individual performance. Jermaine Jones made his long-awaited debut for the U.S., and bossed the midfield for much of the game. The Schalke man broke up numerous attacks and his distribution was near flawless, including a sublime through ball that set the table for Jozy Altidore's 13th-minute opener. But with the U.S. clinging to a 2-1 lead, Jones was robbed of the ball just outside his own penalty area, allowing Jakub Blaszczykowski to lash home a 73rd-minute equalizer.

The turn of events seemed a shame for both Jones and the U.S., given all he had done up to that point. That said, Jones showed enough to answer the question, at least for the moment, of who will be Michael Bradley's long-term partner in midfield. 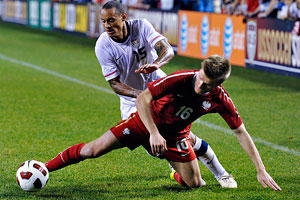 Jim Prisching/Getty ImagesJermaine Jones impressed in his debut with the U.S. national team, but did give away possession in a sequence that led to Poland's late equalizer.

Jones wasn't the only U.S. player to endure an up-and-down night. In the first half, the central defensive pairing of Oguchi Onyewu and Maurice Edu was far from convincing, with Onyewu's poor clearance allowing Adam Matuszczyk to cancel out Altidore's opener. The duo looked much more cohesive in the second half, and Onyewu nodded home the Americans' second goal from Stuart Holden's corner kick. The performance included enough positives to make the combination worth seeing again, although one hopes that Bradley has some other ideas for how his back line might be arranged.

Altidore was another to blow hot and cold. He took his goal well, but then proceeded to have several other chances go begging.

The U.S. will face Colombia on Tuesday. That seems the perfect opportunity for Bradley to continue with the experiments.

Tim Howard, goalkeeper, 7 -- Stoned Robert Lewandowski's clear breakaway in the 22nd minute, and was well positioned to thwart most of the other Polish efforts. A little too content to stay on his line at times, but solid overall. Nothing he could do on either Polish goal.

Carlos Bocanegra, defense, 5.5 -- Coped well with Blaszczykowski's pace. The fact that he remains the Americans' best option at both center back and left back is a problem that Bradley needs to address.

Oguchi Onyewu, defense, 5 -- The first half was a replay of his World Cup; long stretches of solid play, undone by a horrific gaffe. His poor headed clearance should have earned him an assist on Poland's equalizer, but he made up for it by claiming the Americans' second with a powerful header.

Maurice Edu, defense, 5 -- Started off solidly enough, but seemed less assured when under pressure. Got caught square in the 22nd minute only to be bailed out by Howard. Raised his game in the second half and did enough to earn another look in the back.

Steve Cherundolo, defense, 6 -- The veteran was solid in his defending, and got forward effectively. He delivered several telling crosses, and won the corner that set up Onyewu's goal.

Benny Feilhaber, midfield, 4 -- Actually showed well on the defensive end, but struggled to connect with his teammates in the attacking third. Not his sharpest game by any means.

Michael Bradley, midfield, 5 -- Nearly got Cherundolo injured with a hospital pass, but otherwise put himself about well. Released Altidore on a great chance in the first half that the forward should have buried. Still spent too much having to win the ball back from his own miscues.

Jermaine Jones, midfield, 6 -- Covered lots of ground, and delivered a slew of telling passes, including a gorgeous ball over the top that set the table for Altidore's finish in the 13th minute. However, there was no excuse for losing the ball in the run-up to Blaszczykowski's equalizer.

Stuart Holden, midfield, 5 -- His botched clearance was the first domino to fall in the run-up to Matuszczyk's goal. Connected pretty well in attack, and he threatened often with his crosses, including the corner that set up Onyewu. He also had a near catastrophic giveaway from which the U.S. was able to recover.

Clint Dempsey, forward, 7 -- Did a lot of unsung work in attack by holding the ball up and keeping possession. His partnership with Altidore is one worth seeing again.

Jozy Altidore, forward, 6 -- Took his goal well, but should have done better with several other solid chances, including a second half breakaway.

Alejandro Bedoya, 5 -- Seemed to struggle with the pace of the game, and got caught in possession a few times.