Tale of two halves for the U.S. 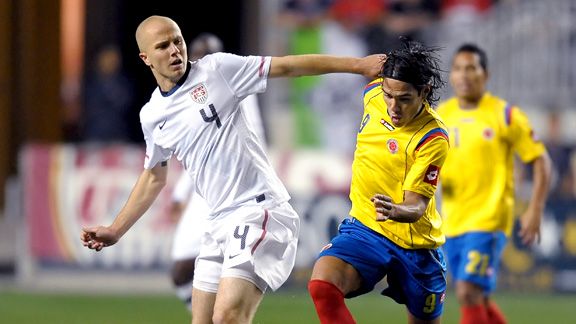 PHILADELPHIA -- What progress, joy and excitement that the U.S. had showed off on Saturday in an exciting 2-2 draw with Poland was lost entirely in a flat, mirthless display against a weak Colombia team on Tuesday night.

The very things that had made the U.S. dangerous for long spells on Saturday -- Jermaine Jones' ball-over-the-top pass to Jozy Altidore, Stuart Holden's service into the box, the strong midfield block of Jones and Michael Bradley -- had all but vanished against the Colombians, especially in the first half. What did materialize was a team bunched up in the midfield, struggling to distribute the ball or spark an attack. Indeed, the first shot on goal didn't come until the 53rd minute.

The first half's 4-3-3 experiment didn't work, as would-be outside forwards Brek Shea and Holden spent their night cutting inside to an already cluttered midfield, where Bradley and Jones played in front of Maurice Edu. In what bit of space the U.S. had left itself, passes were sloppy and service to central striker Altidore had become impossible. The wingers, in turn, had to drop far back to get involved in the action.

Spacing and circulation improved in the second half as the 4-3-3 was ditched for the habitual 4-4-2, with a handful of new actors taking the field. It wasn't until well into the second half that the U.S. started mounting an attack and taking some chances.

Overall, the Yanks' performance was poor, with just one real chance on goal all night. Granted, not all the typical players were available, and this is time for experimentation. So for that, the U.S. gets a passing grade -- but just barely. It should only get better from here.

Brad Guzan, goalkeeper, 6 -- Guzan made a strong save to deny Colombia from running out to a 1-0 lead in the fourth minute. He had little else to do the rest of the night, and probably needn't wash his uniform before the next game.

Jonathan Spector, defense, 4 -- Early on, he got scorched by his man in a fashion all too familiar to his previous performances for the U.S. Not much later, he hounded his man for some 40 yards, only to get his pocket picked in the end. Spector had no role offensively and contributed little on the other end.

Oguchi Onyewu, defense, 6.5 -- The only steady American in the first half, after which he came off. He did well covering Colombia's Falcao, had some spring going up for headers, and helped settle Goodson down.

Clarence Goodson, defense, 6 -- Goodson was hesitant on a first-minute attack by Colombia, and looked unsure of himself early on. But he improved as the game went on, taking control of the back line after Onyewu came off at the half. He provided one of the few moments of danger for the U.S. when he headed a corner just over the crossbar.

Heath Pearce, defense, 6.5 -- Pearce will never be accused of being a stylish defender, but he was effective Tuesday night, snuffing out runs and holding his own in the air.

Stuart Holden, midfield, 5.5 -- He was supposed to play the role of a right forward, but for most of his time on the pitch Holden slid inside far too much when in possession. He did deliver the only chances the Americans had in the first 60 minutes, slinging in a sharp free kick for an Onyewu header that went wide and getting a shot off from distance. His work on the ball was again strong, but he lacked the strong initiative he showed against Poland.

Michael Bradley, midfield, 5 -- Bradley was out of sorts for most of the first half. He played too far back given his role, and got in the way of his teammates. His distribution was erratic and his challenges a little clumsy at times. He's had much better games.

Maurice Edu, midfield, 4.5 -- A lazy pass in the fourth minute got picked off and sent Colombia charging at the American goal. Edu played in a holding role behind Jones and Bradley, but found himself crowded by the other two. His passing, like that of all his peers, was sloppy in the first half, after which he was subbed off.

Jermaine Jones, midfield, 5.5 -- He was prone to losing the ball in the first half. But in the second half, Jones picked up his game, started sending piercing balls into the opposing half for teammates to run onto, and authored some danger.

Brek Shea, forward, 2 -- The 20-year-old forward, who was making his debut for the U.S. team, will hope that his inexperience is taken into account when the coaching staff evaluates his future. He looked very shaky in one half of work, losing the ball at almost every touch and seeing his trademark confidence recede into crippling nerves, which gave way to a lethargic posture.

Jozy Altidore, forward, 5.5 -- Altidore had to work very hard to get the ball in the first half, being the primary victim of the congestion the Americans created for themselves in the middle. He got caught offsides when he should have known better. And he lacked the discipline to stay in the box, instead roaming back to try to get the ball. He did, however, get more involved in the second half, as a consequence of his tiresome efforts. He got a good header on goal in the 86th, but couldn't direct it anywhere but the goalkeeper's hands.

Eddie Johnson, 3.5 -- On one of his first touches, Johnson nearly created a chance for Altidore, but Johnson did little after that. He lost the ball on breakaways and too many times to the string out of the U.S.' attacks, which were few and far between.

Michael Parkhurst, 6 -- The central defender was serviceable in the second half. He was steady, moved into the passing lanes well and showed himself a serious option for Bradley's squad going forward.

Eric Lichaj, 6.5 -- The right back made a very solid impression in his debut for the U.S. Although he got caught on the ball once or twice, he defended his position well, got forward and sent an excellent cross into the box in the 86th that gave Altidore a header on goal.

Clint Dempsey, 6 -- Although he didn't see much of the ball until he started moving into the middle deep during the second half, Dempsey helped distribution considerably and was an asset on offense on the left.

Benny Feilhaber, 6 -- Feilhaber redeemed a poor showing against Poland by tracking back well and providing a spark on the right.