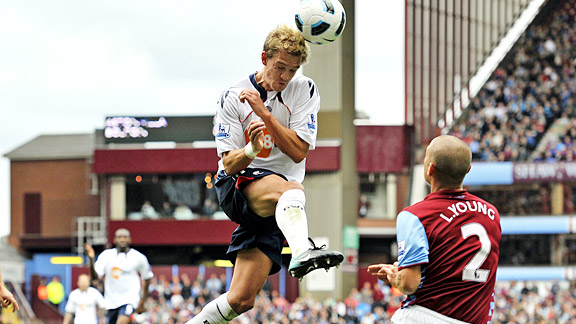 Glyn Kirk/AFP/Getty ImagesHolden has started every game for Bolton this season.

Whenever an American player heads overseas, the move is fraught with questions. Will he settle in quickly and crack the starting lineup, or will he find himself in purgatory, forgotten, and left to rot on the bench?

Fortunately for Bolton Wanderers and U.S. international midfielder Stuart Holden, getting playing time at a top club hasn't been a problem.

In fact, Holden's time with Bolton has in many respects been the smoothest of roads. After joining the team in January, it took him just a month to become a starter, playing the full 90 minutes in an FA Cup match against Tottenham Hotspur on Feb. 24. He made his EPL debut three days later. Not even a cracked fibula -- suffered at the hands of Dutch assassin Nigel de Jong in a friendly between the U.S. and the Netherlands in March -- was enough to halt Holden's rise. He was back on the field by season's end, and recovered sufficiently to make the U.S. World Cup squad.

This season, Holden has been one of the mainstays in Bolton's lineup, starting all seven of its league games. "I was on a short-term contract when I initially went over, and the manager left it in my hands to prove myself and prove that I could play at this level," said Holden. "That was something that I took personally and that I wanted to do. I wanted to show the people, not only my doubters, but the people that have believed in me all these years and given me the support."

This is not to imply that Holden's experience overseas has been devoid of hard work. Far from it. It just stands in stark contrast to what many other U.S. players have experienced. Clint Dempsey has enjoyed a highly successful spell with Fulham, but he has also endured three managerial changes, at which point he seems to immediately slide down the pecking order, only to rise again. Oguchi Onyewu has yet to see a minute of playing time in the Italian Serie A with AC Milan. Even U.S. star Landon Donovan hasn't been immune, as his highly fruitful stint with Everton earlier this year came after equally ineffective spells at Bayer Leverkusen and Bayern Munich.

"If you look at all the guys that have gone overseas, you can see the guys that have earned respect quickly and become regular players in teams, important players," said U.S. national team manager Bob Bradley. "But we know it's not easy because we see on the flip side plenty of players who get into clubs and getting on the field, staying on the field, is difficult. That's a big part of the challenge when you go to Europe. The fact that Stuart has settled in quickly at Bolton shows that it's a good fit." 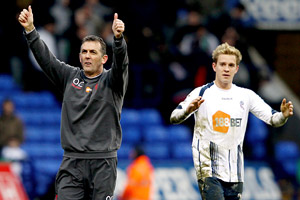 Finding that fit is an often underrated aspect of a player heading overseas. While talent is obviously important, selecting a club with the right playing style, manager and finances is just as critical. And it all could have ended up very differently for Holden. When he first went over to England, he went on trial at Burnley, which at the time was struggling at the foot of the EPL table in a campaign that ultimately ended in relegation. But in the middle of Holden's tryout, manager Owen Coyle left for Bolton. Holden followed. He signed a six-month contract soon thereafter, turning down repeated overtures from MLS.

"I think it was the lure of the Premier League, but at the same time, it was the manager," said Holden about his reasons for signing such a high-risk deal. "[Coyle] suited my style of play. Sometimes you can get into teams that bypass the midfield or play a different style where maybe I wouldn't have fit in well or made the same impact."

Of course, the only thing more disposable than players are coaches, and it's practically guaranteed that Coyle will one day depart, leaving Holden, like Dempsey, to have to prove himself all over again. But for the present, Coyle looks to have added some stability to the club, leaving Holden to appreciate his situation all the more.

"It's tough for Americans to find the right fit where they don't get in and managers just forget about them and you end up on the bench," said Holden. "That would have been a real blow to my career at this stage, because I need to continue playing games and continue to develop."

For now, Holden's development looks set to continue for both club and country. Both Holden and Bradley have said that the aftereffects of the broken leg left Holden less than 100 percent fit for World Cup. That left Holden to only play a bit part that consisted of a single four-minute substitute appearance against England. The expectations are different this time around.

"The World Cup was an unbelievable experience. I'm grateful for having been there," said Holden. "But now it's made me even hungrier to be a big player in this next cycle and really be in the team for the next World Cup."

Given Holden's undeniable skill, that could make for another perfect fit.