LONDON -- Saying "this is where I belong," Wayne Rooney ended a week of speculation about his future Friday by changing his mind and signing a five-year contract with Manchester United.

Only days after announcing he was prepared to leave the club he joined in 2004 because it was not aggressive enough in acquiring players, the star England striker said he was persuaded to stay following talks with manager Alex Ferguson and the club's American owners, the Glazer family.

The contract extension makes him the highest-paid player in team history and keeps him at United until June 2015.

Now that Wayne Rooney has reversed himself and signed a new five-year contract, David Hirshey asks: Where did we really think he was going? Story

"I'm signing a new deal in the absolute belief that the management, coaching staff, board and owners are totally committed to making sure United maintains its proud winning history, which is the reason I joined the club in the first place," Rooney said in a statement.

One of the most turbulent weeks in United's recent history began when a "shocked" and "bemused" Ferguson said at a news conference Tuesday that Rooney -- the team's most marketable asset since the departure of Cristiano Ronaldo to Real Madrid last year -- wanted out.

Rooney responded Wednesday by detailing his concerns with United's strength and saying he had not been given assurances by chief executive David Gill about the club's future.

But the change of heart came after talks Thursday and Friday involving Rooney, his representative Paul Stretford and the club's hierarchy. Ferguson, Rooney stressed, was key.

"They've convinced me this is where I belong," Rooney said. "I said ... the manager's a genius and it's his belief and support that have convinced me to stay. I felt I had to get my point across and we finally came to an agreement."

Ferguson signed Rooney six years ago for then more than $40 million. Rooney helped the club to Premier League titles in 2007, '08 and '09, and played on the team that won the Champions League in 2008. He was England's player of the year last season after scoring 34 goals in all competitions. 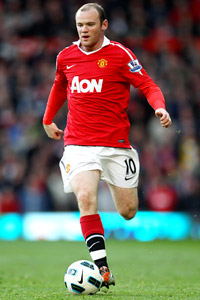 Alex Livesey/Getty ImagesWayne Rooney's agreement comes as he sits for three weeks with an injured ankle he sustained in practice Tuesday.

"I said to the boy that the door is always open and I'm delighted Wayne has agreed to stay," Ferguson said. "Sometimes, when you're in a club, it can be hard to realize just how big it is and it takes something like the events of the last few days to make you understand.

Gill believes keeping hold of Rooney is a "real statement of intent."

"We've made sure we've retained one of the best players in world football," he said.

Ferguson said he and Rooney's teammates had received an apology from the striker.

"We have all been hurt by events of the last couple of days," Ferguson said. "Now we just want to move on."

Rooney's reportedly strained relationship with Ferguson has been heavily scrutinized. Last month, Rooney was the subject of newspaper allegations that he had repeatedly cheated on his then-pregnant wife with a prostitute.

Ferguson benched Rooney for the next game against Everton, the club that sold him to United, to shield him from fan abuse. His playing time has been limited since, and he has only one goal for his club this season -- a penalty kick against West Ham.

"I'm sure the fans over the last week have felt let down by what they've read and seen," Rooney said. "But my position was from concern over the future. It's up to me through my performances to win them over again."