LONDON -- U.S. midfielder Stuart Holden scored his first Bolton goal Saturday to clinch a 3-2 victory over Wolverhampton in the Premier League on Saturday, while compatriot Brad Friedel conceded twice in four minutes as Aston Villa threw away a two-goal lead for a 2-2 draw with Manchester United.

Bolton is turning out to be this season's surprise, closing the gap on fourth-place Manchester City in the final Champions League qualification spot to three points with a third of the season gone. 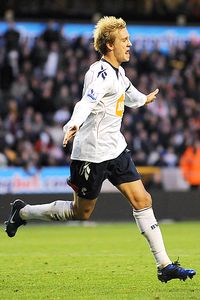 Bolton went ahead at Wolves after just 45 seconds, with defender Richard Stearman heading into his own net.

Holden set up Johan Elmander for Bolton's second in the 62nd minute, with the Sweden striker dribbling through four defenders before slotting into the bottom corner.

Holden, who joined Bolton in January from the Houston Dynamo, finally got his name on the scoresheet five minutes later, slotting Lee Chung-Yong's pass into the net.

"What a great feeling to get first goal and even better feeling for the win and 3 pts," Holden tweeted after the match.

But it was a nervy end to the match, with Kevin Foley pulling one back for the home side two minutes after Holden's strike and Stephen Fletcher finding time for a Wolves second.

Friedel's Villa looked set to inflict United's first loss of the season after Ashley Young scored from the penalty spot in the 72nd minute, and Marc Albrighton completed a swift counterattack four minutes later by slipping Stewart Downing's cross into the net.

But after giving away the ball that led to Villa's second, Federico Macheda pulled one back with a powerful shot past Friedel in the 81st. United captain Nemanja Vidic completed United's rally in the 85th when he met Nani's cross with a diving header at the far post.

Having been kept quiet until the last 10 minutes, Friedel blocked Gabriel Obertan's effort in stoppage time to preserve the point for Villa.

In Germany, U.S. midfielder Michael Bradley scored as Borussia Moenchengladbach climbed out of last place in the Bundesliga with a 4-0 victory over Cologne on Saturday.

Bradley fired Gladbach's second into the bottom of the net from the edge of the area in the 70th minute.

Raul Bobadilla opened and closed the scoring for Gladbach on a drenched pitch in Cologne, while Igor de Camargo netted the third goal to send Colgone to the bottom of the standings.