The myth of hosting a World Cup 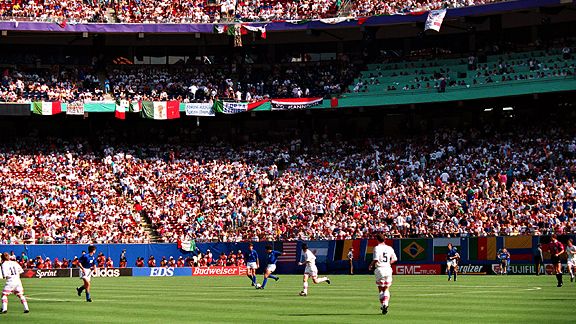 Simon Bruty/AllSportThe 1994 World Cup in the U.S. was a huge success, but landing the rights to the 2022 edition would do little to jump-start the domestic game.

I get asked all the time: "When will soccer explode in the U.S.?"

Oh, it will get big. The American demographics, as we well know, are shifting in soccer's favor. And while many decades ago, young immigrants eager to fit in with their new American peers would abandon the (soccer-loving) customs of their native countries and adopt American sports, today's immigrant communities cling to soccer more than ever. So you can cry all you want, Glenn Beck and Jim Rome, but soccer will only get bigger here. It's inevitable.

However, an explosion that irreparably blows up the status quo and makes this a soccer land? Brought on by, say, a 2022 World Cup held on the clay banks of the Mississippi or played in view of the shining seas? Never.

The immensely popular late-1970s New York Cosmos didn't create a soccer boom. Nor did the U.S. hosting the World Cup in 1994, the U.S. winning the Women's World Cup in 1999 or the U.S. men's team reaching the World Cup quarterfinals in 2002. This summer, Landon Donovan & Co. electrified the nation before falling in the second round -- but nothing really has changed since.

So we shouldn't think that the U.S. will become Soccer Central if it lands the 2022 World Cup.

That's OK, too, because it's better for a sport to develop gradually over time instead of exploding onto the scene like a fad, only to fizzle out almost as quickly. NASL, anyone?

The only realistic path for gaining a sustainable foothold in the American sports culture is one of slow, controlled growth. And that has more to do with the way sports become ingrained in society than the ability and effort on the part of those involved in American soccer.

"Modern sports as culture are inextricably tied to the development of mass societies," professors Andrei Markovits and Steven Hellerman wrote in their academic work "Offside: Soccer and American Exceptionalism." "Whichever sport entered a country's sport space first and managed to do so in the key period between 1870 and 1930, the crucial decades of industrial proliferation and the establishment of modern mass societies, continues to possess a major advantage to this day. … Once [sports] have settled in, they are virtually impossible to dislodge. … Newcomers, in effect, remain crowded out."

A four-week tournament, even one as big as the World Cup, isn't going to change that.

There are some who will tell you that landing the World Cup in 2022 is critical for the further development of MLS. But there is little evidence to suggest the league would benefit all that much from the U.S. hosting the tournament. Just 10 of the 18 cities in contention to host 2022 World Cup games have MLS teams in their markets. No new soccer stadiums will be built, and no MLS stadiums will be used, much less improved or renovated. Interest will increase, but only for as long as the world's best players are around. When they leave town, well, out of sight, out of mind.

As this past highly watched World Cup demonstrated, the crossover of World Cup fans to MLS is negligible. The league inherits almost none of the new fans of the global game generated every four years. In the 24 MLS games played after the 2010 World Cup, attendance averaged 17,228, up from the 16,472 per-match average before the tournament. During the 2006 MLS season, average attendance grew by just 85 visitors per game after the World Cup. After the 2002 World Cup, it fell by 85 fans per game. In 1998, the post-World Cup MLS attendance dropped by 1,574 per game.

You could attribute the lack of substantial growth at the gates to a post-World Cup hangover and say that the real benefits emerge over years, not weeks. But even this argument is overstated. Since the U.S. run to the quarterfinals in 2002, MLS attendance has risen just 845 fans per game.

It takes decades to chip away at the big sports' market share. Landing a World Cup will help just a little. And conversely, not getting the rights to the 2022 edition will be only a minor setback, not the catastrophe some pundits will make it out to be. So if the U.S. doesn't emerge victorious Thursday in Zurich, don't worry. Soccer in this country will be just fine.